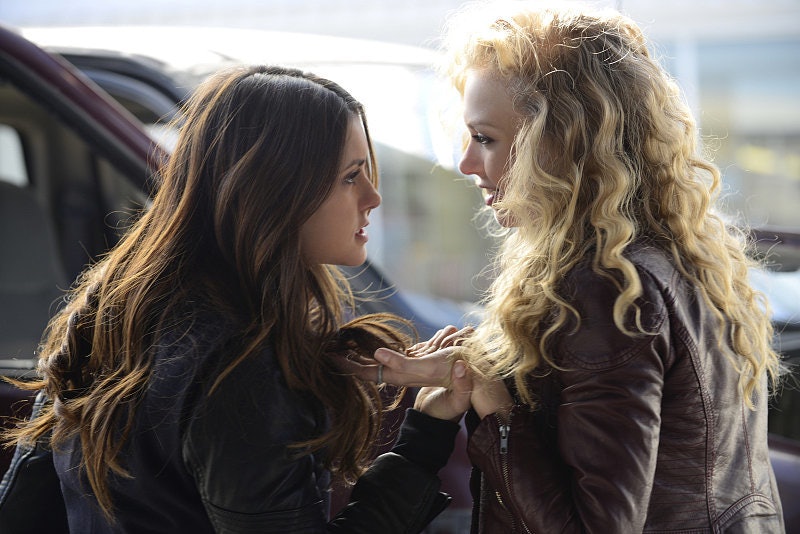 On Thursday, The Vampire Diaries did the, if not unthinkable, at least unexpected: It killed off one of its Big Three. Unless you count Elena's transition from human to vampire (and really, you shouldn't – that was always a matter of when, not if), this is the first time the show has really dealt with the death of one of its true leads, Elena, Damon, and Stefan.

Stefan died tonight. How? Julian, who has taken up permanent residence in Tyler's body, ripped his heart right out of his chest. Stefan turned gray, as dead vampires do in this world, and even crossed over to the other side via Bonnie. So far, only Bonnie, Caroline and Enzo know what happened. They're all a mix of shocked and devastated, but the moment(s) when Elena and Damon learn are sure to be even more heart-wrenching.

But this is The Vampire Diaries and deaths are never permanent if the writers don't want them to be (just ask Jeremy, Bonnie, Matt, etc.), so it's not time to really call Stefan down for the count just yet. Assuming Paul Wesley's post-show tweet is just a cheeky attempt to throw us all off the scent, there's a good possibility the Stefan won't be gone for good.

But just how could the show bring him back? Here are my personal top three theories:

1) The Travelers bring him back from the dead.

So, here's the thing: The Travelers are kind of winning at everything right now. They brought Markos back from the dead, which disrupted the Other Side. They have successfully drained Stefan and Elena of enough doppelgänger blood to power their dark mojo. They've successfully started their spell to cancel out all witch magic (which includes everything from the daylight rings to vampirism itself). They're shaping up to be Mystic Falls' biggest threats yet.

But their whole plan hinges on having both of the doppelgängers. In fact, the witches (represented by Liv and Luke) tried to kill either Elena or Stefan early in the episode. Getting rid of even one of them would be enough to stop the Travelers. And when Julian finally does the deed and rips out Stefan's heart, he grieving the loss of his love and declares the Traveler's spell useless with a doppelgänger down.

If this is true and the Travelers (particularly Markos) need both doppelgängers alive to work their magic, then my money is on them pulling some major supernatural strings to get Stefan back on this plane, at which time our heroes can save him for real.

2) Bonnie and Enzo find a loophole in the Other Side.

No one has been working harder to solve the problem of the Other Side disappearing than Bonnie – that is, until Enzo realized she had nothing and he was definitely doomed to be sucked into a void of nothingness. Now that Enzo, who we know is extremely resourceful, is on the case, I feel like a solution might be in our grasp. They were close to getting help from Maria, the dead Traveler, but she was sucked away by the void before she could help. If they can find even one more Traveler who knows the spell and has a grudge (like, oh, I don't know, Julian, perhaps?), they might be able to work the plan Bonnie concocted this week after all.

3) Damon will make a big sacrifice.

Let's be clear: I will be very upset if this ends up happening, but it would be a big character move to have Damon get Stefan back from the dead with a grand personal sacrifice. It would leave us with another issue to solve next season (because we can't have Damon out of the game, either), but I would buy it, and it would help put Damon back on track after a season of moral backsliding.

More like this
There's At Least 1 Major Difference Between The 'Vampire Academy' Book & TV Series
By Grace Wehniainen
The New Bachelor Will Be Announced Next Week & Here Are The Top Contenders
By Grace Wehniainen
Nicola Coughlan Shared A Lady Whistledown Excerpt From ‘Bridgerton’ Season 3
By Grace Wehniainen, Alyssa Lapid and Sam Ramsden
Everything To Know About 'The Last Of Us' TV Adaptation
By Sophie McEvoy and Radhika Menon
Get Even More From Bustle — Sign Up For The Newsletter