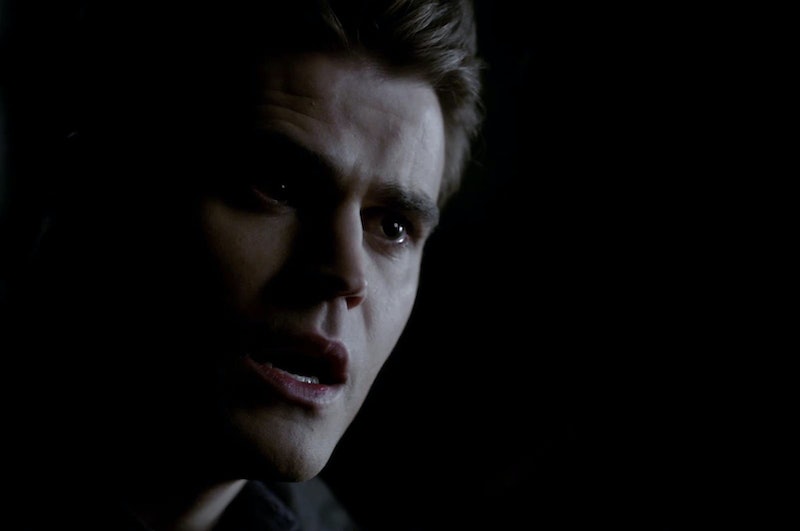 In the final moments of the penultimate Season 5 episode of the CW's longrunning supernatural drama, Julian is still hanging out in Tyler's body and he rips Stefan's heart right from his chest, forcing Caroline to watch on Stefan's life drains from his body. Sure, we've seen hints that it would be easy to kill Stefan in the past — Damon has reached his hand into Stefan's chest and threatened to end him on more than one occasion. But no one ever thought our hero would really kick the bucket. Well, some of us had theories, but I think I speak for all of us when I say we basically assumed we were out of our minds.

Of course, this is The Vampire Diaries, so while Stefan quite literally died during this Season 5 episode, that doesn't mean he's gone from the series. Hell, if we're counting deaths, just look at Jeremy and Bonnie. If there was an award for the most deaths on a show without actually leaving, these two would take the cake. TVD never really kills anyone, unless they're a villain and even then, the baddies always manage to find their way back — just look at Klaus.

So yes, it was extremely difficult to see the life drain from Stefan's eyes, but feat not: He will be back. Vampire Diaries fans will not put up with Bonnie dying a thousand times only to hang out as a ghost for the majority of her time on the series only for Stefan to end his reign after one measly death. In the meantime, things are not going to be easy for his vampire framily.

According to the logline for next week's big Season 5 finale, Damon will be hit hard by his brother's death — though, we're guessing Caroline and Elena will rouse him to hatch a plan to bring baby bro back from the dead (or we'll have to come after Damon ourselves). But it will be good to see just how much Damon really cares about his brother. They haven't always seen eye to eye (being in love with the same girl will do that to you), but nothing brings these two together like adversity or tragedy and this certainly accomplishes that.

What's more is that this event will really affect Caroline, who Steroline shippers were thrilled to see getting a wee bit jealous of Stefan and Elena last week. Watching Stefan die likely helped her attachment grow and as the logline for next week also states, she gets a little testy when Liv makes an offhand remark about Stefan, so it's clear those feelings aren't going away. (As a Klaroline 'shipper, I personally hope they're just conflated feelings of friendship, but we'll see.)

Either way, this tragedy will be resolved. Let us not forget that at the end of last season, we found Stefan in a steel box at the bottom of the river. What's a little death, when he Houdinied out of that situation?

More like this
The 'PLL: Original Sin' Creators Say A’s Identity Will Be “Very Clear” By The Season Finale
By Alyssa Lapid
Netflix Just Revealed When 'Never Have I Ever' Seasons 3 Will Premiere
By Gretchen Smail and Alyssa Lapid
‘The White Lotus’ Is Coming Back For Season 2 This Fall
By Bustle Editors
'The Capture' Is Finally Back – & S2 Looks Tense AF
By Sophie McEvoy and El Hunt
Get Even More From Bustle — Sign Up For The Newsletter