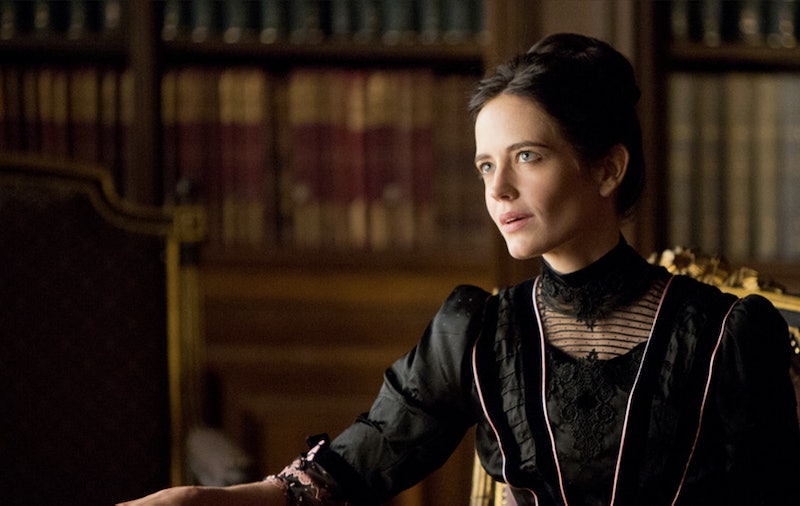 The new literary gothic drama Penny Dreadful premieres on Showtime May 11, featuring origin stories for some classic horror fixtures like Dr.Frankenstein as they stalk about Victorian England. To make sure the landscape isn't all hulking monsters and men in porkpie hats, Penny Dreadful star Eva Green plays Vanessa Ives, an observant heroine with some supernatural abilities up her sleeve. We're excited to see the Casino Royale beauty in the spooky new series, but she almost lost it all because of an earlier role.

The native Parisian made her debut in Bernardo Bertolucci's steamy arthouse film The Dreamers — a daring choice, to say the least. Still, her decision makes some sense: As the daughter of famed actress Marlène Jobert, the French-born Green told Index Magazine that she comes from a "bourgeois family," so that lineage might explain her attraction to the similarly bourgeois protagonists of Dreamers. The film follows an American university student as he becomes erotically entangled with a brother and sister leading up to the 1968 Paris Student Riots. It's no surprise that Green might have chosen such a daring project to start; her mother appeared in the films of notable French New Wave filmmakers like Jean-Luc Godard.

But the decision to take on the sultry project was taken with a steady dose of reservations. Cinema geeks will recall Bertolucci's leading ladies are not without their controversies. As reported by The Guardian, Green's parents and agent begged her not to take on the potentially damning role. They feared her fate would be similar to Last Tango in Paris star Maria Schneider, who emerged from working on the film saying she "felt a little raped" and was pigeon-holed into the role of sexpot for much of her career. (For the record, Green's parents are still not big fans of the film, according to the same Guardian piece).

Even Green remarked that she was "speechless" when she saw the rough cut of the film, saying she felt she was "wearing a costume" whenever she was on screen. Potential controversies aside, the film went on to earn four stars from none other than Roger Ebert, for it's multi-layered poignancy. (And committed to celluloid the beautifully unscripted scene where Green's hair catches fire and co-star Michael Pitt snuffs it out).

Post Dreamers, Green went on to several Hollywood roles, some forgettable (like sequels to 300 and the upcoming Sin City 2), and some more memorable, such as Bond flick Casino Royale. She's no stranger to TV or period work either — with a stint on Starz' Camelot and Orlando Bloom starrer Kingdom of Heaven, there's no doubt Green will absolutely nail it in her upcoming foray into Victorian gothic.

More like this
The 'Love, Lizzo' Harry Styles Scene Is Just 1 Moment That Made Fans Feel Seen
By Brad Witter
Blake Lively's Reaction To Ryan Reynolds' Dance Video Was Pure Thirst
By Stephanie Topacio Long
'Avatar 2' Now Has A Teaser Trailer & Release Date
By Jack Irvin and Alyssa Lapid
Michelle Williams Laughs Often About Motherhood Thanks To 'The Fabelmans'
By Marina Watts
Get Even More From Bustle — Sign Up For The Newsletter