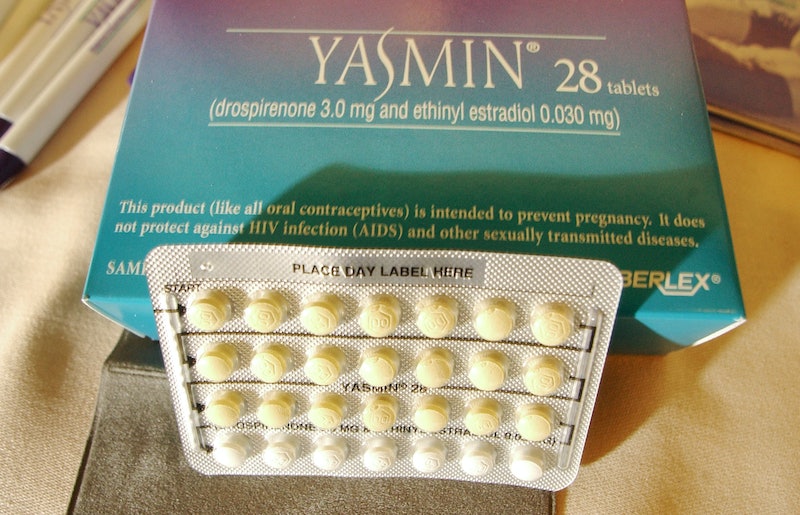 May 9, 2014 marks 54 years since the Food and Drug Administration first approved the birth control pill, forever changing the lives of women across America. Today, four out of five women take the Pill, but those tiny hormone packets have come a long way since they first hit the scene. Though the Pill has maintained its controversial status over the decades, it has also established itself as a symbol of women's freedom and rights.

There's no doubting the Pill's impact, but the drug sure has evolved over the years. Check out how taking the Pill has changed, by the decade.

On May 9, 1960, the FDA gave a thumbs up to a new oral contraceptive. Named Enovid, the Pill made history as the first drug given to a healthy person for long-term use, launching a cultural shift in family structure and attitudes toward sexual health. Now, the Pill is part of many women's everyday routine, but good luck getting your hands on a prescription for birth control in the '60s.

Back then, anti-birth control laws were in effect in 30 states, prohibiting and restricting both sales and advertisements. A year after the Pill was approved, 400,000 women in the United States were taking it — a number which increased to 1.2 million by 1962. Still, in 1964, the drug was illegal in eight states, and fewer than half of U.S. college health clinics offered it. Even Planned Parenthood required that patients had to be married to get their hands on the Pill. If you lived in Connecticut, there was even a law that prohibited married couples from using contraception at all.

By 1965, the Supreme Court struck down the legislation mandating that "any person who uses any drug, medicinal article or instrument for the purposes of preventing conception shall be fined not less than forty dollars or imprisoned not less than sixty days."

The case involved Estelle Griswold, the executive director of Planned Parenthood League of Connecticut, and Dr. C. Lee Buxton, doctor and professor at Yale Medical School, who were were arrested and found guilty for providing illegal contraception. (They handed over $100 fines.) Ultimately, the higher court found the law violated the "right to marital privacy" and couples were allowed access to birth control, including the Pill.

Following Griswold v. Connecticut, the 1971 Eisenstadt v. Baird case paved the way for single females to obtain further access to birth control. Following a lecture at Boston University in which he gave out free contraception, William Baird was arrested for violating a Massachusetts law that prohibited such actions.

The Supreme Court struck down the state ruling, allowing unmarried citizens to have all the protected sex they wanted.

While 6.5 million American women were on hormonal birth control by 1965, studies started to reveal medical concerns with the Pill. Word of serious side effects started to spread, including blood clots, heart attack risk, and weight gain. Much like present-day studies that detail the potential for a drug's danger, the reports served as warning to women.

As a result, birth control pill sales dropped 24 percent in the late 70s. The warnings also greatly impacted the African-American community. Some Black women were even urged not to take the Pill after powerful African-American leaders criticized the contraceptive as contributing to "black genocide."

Hormonal birth control started off with pretty high dosages, linking it to adverse health effects. Enovid contained three to more than seven times the amount of estrogen compared to today's combination oral contraceptives — just think of all the nausea and headaches women experienced as a result.

It wasn't until 1988 that the original high-dose pills were taken off the market. By then, lower dosages were making an appearance and in 1998, Mircette became one of the first oral contraceptives to offer a low estrogen dose coupled with progestrin.

Women had widespread access in the new millenium following a 2000 ruling from the Equal Employment Opportunity Commission that required employers to provide contraceptive coverage as part of their health plans. The sentiment would reemerge in 2012 with President Obama's similar mandate at no cost.

What's next for birth control? Most recently, the FDA approved Seasonale, which allows women to have only four periods a year. For those who completely want to rid themselves of the monthly visitor, the administration also gave their seal of approval for Lybrel, which gives ladies the option of stopping their period altogether.

Health concerns over Yaz and other brands of the Pill have also exploded over the last decade, leading some to argue that the Pill's ubiquity as a primary form of female birth control in the United States should be questioned. Jokes about the Pill's marketing have also abounded.

It's been a long and controversial road for the Pill, but one thing is clear: This birth control is here to stay.

More like this
What Is The Forest Personality Test? The TikTok Trend, Explained
By Georgina Lawton
Why Experts Say Sleeping With A Fan On Isn’t Totally Risk-Free
By Sophie McEvoy
The Lionesses Are Calling For Equal Access To Football In Schools
By Sophie McEvoy
'The Capture' Is Finally Back – & S2 Looks Tense AF
By Sophie McEvoy and El Hunt
Get Even More From Bustle — Sign Up For The Newsletter