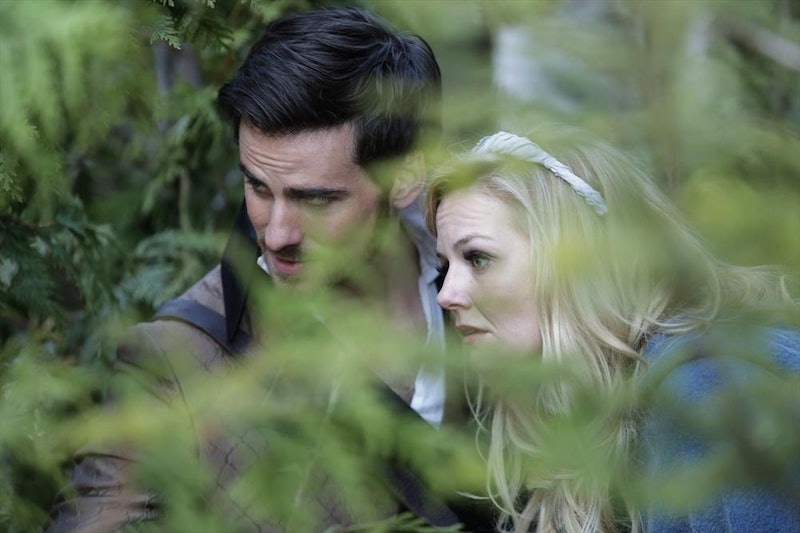 Well, this escalated quickly. Sunday night's Once Upon A Time ' Season 3 finale is underway and already off to a running start. We all cheered way too soon when Rumpelstiltskin killed The Wicked Witch in the final moments of last Sunday's episode "Kansas." Because even though she didn't succeed in her plan to return to the past and eff up everyone's lives, Zelena had a Plan B and it looks like she's going to get her way after all.

We already knew from the promo for this week's two-hour finale that Emma and Hook were going through a portal and from the synopsis, that they were headed to the Enchanted Forest. And now we know exactly how and why: While Zelena was contemplating her fate in her Storybrooke jail cell, she linked her death to the opening of a portal to the past. So when Rumpel "killed" her with The Dark One's knife and released her magic, he activated the aforementioned portal.

So where are we at now? Hook and Emma are in the Enchanted Forest, way back once upon a time before Snow White and Charming met and while Snow was still on the run from The Evil Queen. And, inadvertently, the pair are already starting to throw everything off, including the part where Snow and Charming are supposed to meet. If they don't meet, then Emma is never born and life as we know it is over.

Clever, Zelena — if she couldn't change the past, she was going to make sure someone did.

Hook and Emma, following their first major screw up of the night, linked up with Rumpelstiltskin in an attempt to get home. He agreed to work on it, but they had to figure out how to fix thwarting the Snow and Charming meet-cute themselves. (They also blew Rumpel and Belle's minds when the revealed that they'd eventually fall in love — talk about a spoiler alert.) Hook, using his past self, managed to get to Snow and convince her to attend Charming's engagement ball and steal his ring so that the pair could meet. And they succeeded — until Emma and Hook attended the ball and got caught aiding a fugitive. Emma's now in The Evil Queen's (Regina) jail and set to be executed.

Now that they've saved Snow and Charming's future, can Hook save Emma from dying before she's even born? The members of this Charming crew have more lives than a cat, apparently. Not only did Emma save herself (sorry, Hook, you weren't fast enough, buddy) but Snow saved herself from being burned to death by Regina. And we're back to square one with Hook and Emma trying desperately not to alter the course of history.

Snow and Charming are back on their path to true love after a sticky situation on the Troll Bridge. Emma and Hook outsmarted Zelena's Plan B and made it back to Storybrooke alive. But if anything's changed, it remains to be seen.

More like this
The 'PLL: Original Sin' Creators Say A’s Identity Will Be “Very Clear” By The Season Finale
By Alyssa Lapid
'Everything I Know About Love's Finale Is Packed Full Of Rom-Com Easter Eggs
By Maxine Harrison
Netflix Just Revealed When 'Never Have I Ever' Seasons 3 Will Premiere
By Gretchen Smail and Alyssa Lapid
‘The White Lotus’ Is Coming Back For Season 2 This Fall
By Bustle Editors
Get Even More From Bustle — Sign Up For The Newsletter