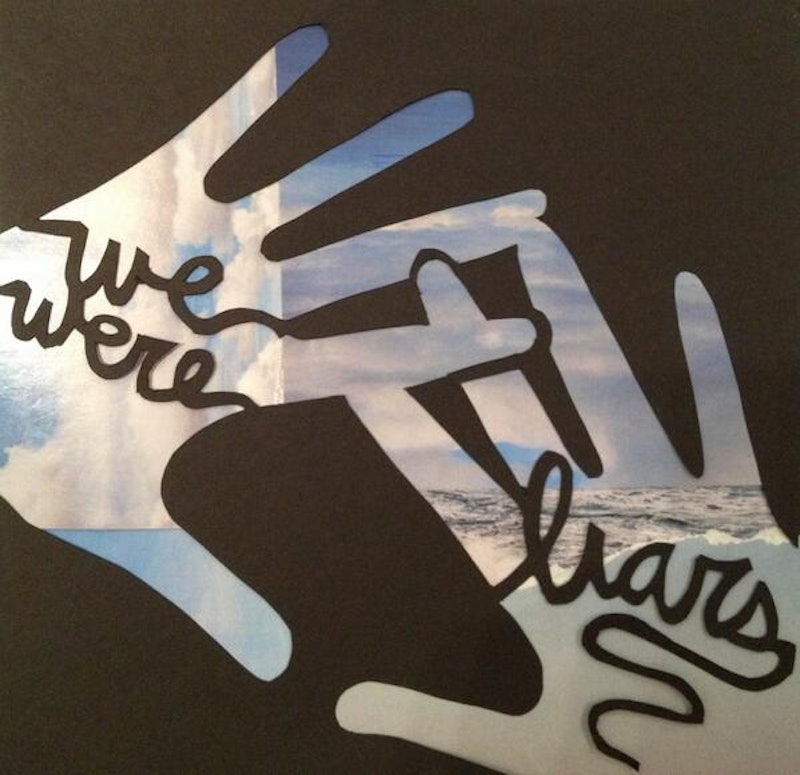 Readers during the summer of 2012 were captivated by the twists and turns of Gillian Flynn's psychological thriller Gone Girl . As we lead up to the release of the movie adaptation, we're looking for other books that can give us the same chills and surprises. This summer the surprise ending everyone will be talking about is E. Lockhart's We Were Liars (Delacorte).

Lockhart is already well known in the literature community as a finalist for a National Book Award for Young People's Literature and a Printz Award. We Were Liars , published May 13, received major advanced praise, garnering starred reviews from Kirkus , Booklist , and Publishers Weekly and even earned a cover blurb from the reigning king of YA, John Green.

Thrilling, beautiful, and blisteringly smart, We Were Liars is utterly unforgettable.

We Were Liars centers on four teenagers, dubbed "The Liars:" Cadence, Johnny, Mirren, and Gat. Cadence, or "Cady," narrates the story of the drama around the 15th summer on her wealthy grandfather's private Beechwood Island, with herself, her cousins, and family friend Gat. That summer Cady's aunts are arguing among each other and with their father over inheritance. Cady is falling in love with Gat, who has a girlfriend back home. But then Cady wakes up naked, head killing her at the beach, she has no memories of what happened, and her memories of the whole summer are shattered. The strangest part is that no one in her family will fill in the blanks.

Lockhart's prose is artful and gorgeous, and the scenes she paints will sear into your memory. And the twist? I'd advise sticking with the novel's marketing slogan:

Read it. And if anyone asks you how it ends, just LIE

We Were Liars will certainly fulfill your desire for a twisting, turning, and utterly captivating story. But it's not the only contemporary novel that has a surprise ending.

Marisha Pessl's unique novel is structured chapter by chapter as a syllabus in English literature — Othello and Wuthering Heights , for example. Blue van Meer is a smart, intriguing teenage protagonist (hence why some throw this book in with the YA set), and the novel's twists and turns begin when Blue's film studies teacher Hannah Schneider commits suicide, and Blue ventures to find out why.

Abigail Haas' (a pen name for Abby McDonald) YA thriller about three teenagers who spend a fateful Spring Break in Aruba is torn right from real life headlines. Anna, her boyfriend Tate, and her friend Elise are vacationing when Elise is murdered, and Anna is accused. Dangerous Girls has all the darkness, mystery, and surprises any fans of Gone Girl would love.

Don't let the ballet pink cover fool you; Choker is a dark, creepy read. Ever since Cara moved away from her best friend Zoe, she's been the subject of teasing from her new peers at school. But the trouble really starts when that friend, Zoe, shows up unannounced. Does Cara really know her best friend at all?

4. When You Reach Me by Rebecca Stead

Miranda and her best friend Sal grew up in New York City, so by sixth grade, they now know how to navigate the city like the back of their hands. But when four mysterious letters show up, their whole world starts to fall apart around them. While not as dark as Gone Girl or We Were Liars, Rebecca Stead's When You Reach Me will stun you nonetheless, and will certainly have you starting over to read it again to catch what you may have missed.

5. The Adoration of Jenna Fox by Mary E. Pearson

When a teenage girl wakes up from a coma, she's told her name is Jenna Fox. But because she can't remember anything, she's not sure if this is true, but why would someone lie to her? Mary E. Pearson writes from a slightly dystopian slant, as the novel is set just a hint into the future, where questions about medical ethics and humanity are center stage. And page by page, Pearson reveals layer after layer of the truth about Jenna Fox.

6. Save Yourself by Kelly Braffet

Kirkus called Save Yourself "a horrifying look at damaged people," which sounds like it could have just as easily been written about Gone Girl . Kelly Braffet's story of two teenage brothers and two teenage sisters is dark and completely disturbing, but incredibly engaging. The novel was called an "electrifying, tomahawk missile of a thriller" by the king of realistic thrillers himself, Dennis Lehane.

Liar is imbued with the same pervasive sense of unease; the feeling that you just can't trust your narrator, reminiscent of We Were Liars and Gone Girl. Micah, the narrator, is a compulsive liar, and she knows it. But in this thriller, her boyfriend dies, and readers just don't know who to trust.

Jessica Park's Flat-Out Love is much more of a romance and has more heart and humor than Gone Girl, but it has a twist that will shock you nonetheless. College freshman Julie finds herself uneasy about the Watkins family, whose matriarch is her mother's college roommate, and who takes her in when her college housing falls through. But via Facebook messages, emails, and IMs, a secret comes to the surface.

Images: We Were Liars Tumblr (2)

More like this
We’ve Entered The Hot Boy Reader Era
By Samantha Leach
Jessica Simpson On The Time She Was Pursued By A Backstreet Boy & An *NSYNC Member
By The Editors
Netflix Shut Down 'Bridgerton' S3 Rumours About A “Very Dark” Storyline
By Bustle
Here's How Netflix Should Adapt Prince Harry's Memoir Into A Movie
By Ginny Hogan
Get Even More From Bustle — Sign Up For The Newsletter
From hair trends to relationship advice, our daily newsletter has everything you need to sound like a person who’s on TikTok, even if you aren’t.