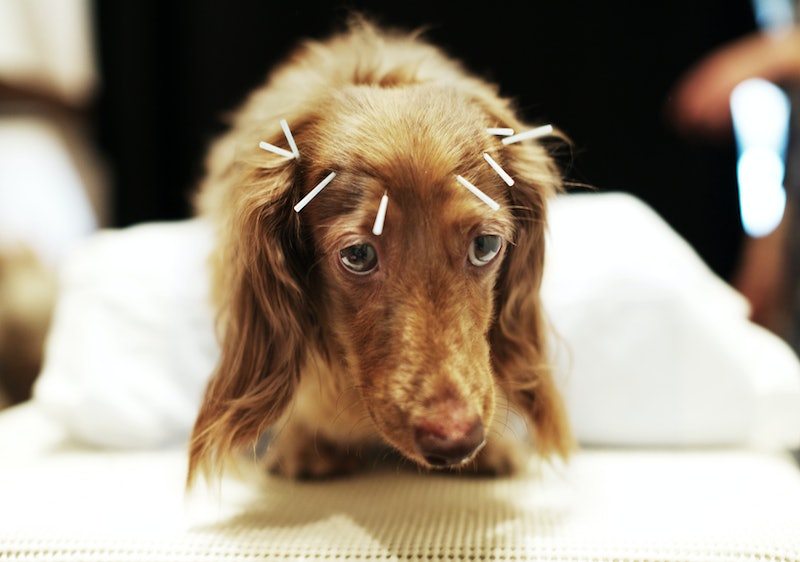 Another day, another weight loss trend: this time something called "the tapping diet" is making the rounds, the Daily Mail reports. Also known as the "Emotional Freedom Technique" (EFT), tapping is a method of acupressure that you can perform on yourself to allegedly curb your emotional eating. It's simple and safe, and at least it won't cost you any money — but don't expect this practice to do more for your dieting than any other self-awareness activity.

Tapping, or EFT, was developed and made popular in recent decades by "energy healing" types. They took their lead from Chinese medicine, with its focus on identifying certain conditions with certain areas of the body, and applying pressure (as via acupuncture needles). On its face, it is somewhat suspicious that EFT is supposed to work to some extent for literally all ailments, but now it's become re-popularized for dieting, so let's examine those claims.

It's no secret that many of us, women in particular, overeat for emotional reasons, which causes weight gain. So, if we could control our emotions, we'd then be able to control our eating and therefore our weight, right? According to some Harvard study, periodically tapping or pressing points like your forehead, chin, and collarbone has distinct health benefits:

Stimulating these points, according to a Harvard Medical School study, decreases activity in the amygdala, the part of the brain that controls production of the stress hormone cortisol, which is linked to increased appetite, sugar cravings and levels of abdominal fat. Tapping these points, then, should not only decrease your cortisol levels, but cut your cravings and lower your weight.

Nice theory! Unfortunately, although most tapping/EFT sites refer to this "Harvard Medical School" study, I can't find any evidence that it actually exists. And even if the study does exist, and does show that tapping decreases emotional arousal, that's not good evidence that tapping works in the way proponents claim: by changing flows of energy through one's body to act upon one's brain. While "a recent clinical study on 89 women showed those who tapped for 15 minutes a day lost an average of 16 lb in eight weeks, without following a strict diet or exercise plan," the most reasonable inference is just that tapping gives people an opportunity to pause, reflect on their emotional states, and choose not to eat when they're not really hungry.

At the end of the day, does tapping/EFT "work" for dieting? Maybe, in the sense that it helps some people to focus their minds and stick to their eating plans. But no, in the sense that there's no evidence it works upon your body's energy or brain chemical balances or any other physiological factor directly.

More like this
Wimbledon Alters All-White Kit Rule Amid Candid Period Discussions
By Catharina Cheung and Rachel Mantock
The 5 Best Pillows For Acid Reflux, According To A Sleep Expert
By Maria Cassano
7 Dos & Don'ts To Follow For The December 2022 Full Moon
By Brittany Beringer
Here's How To Support Jewish People Amid Rising Antisemitism
By Hannah Orenstein
Get Even More From Bustle — Sign Up For The Newsletter