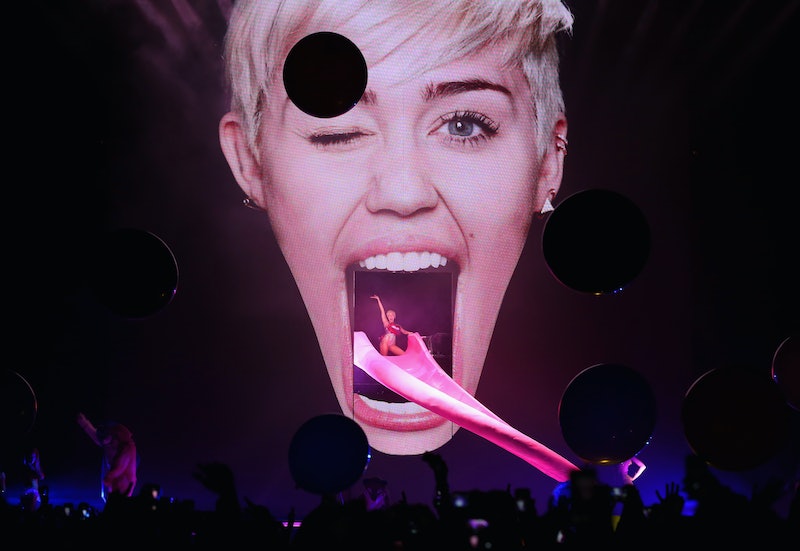 What is wrong with Miley Cyrus? That single question seems to be haunting our generation. We grew up with Cyrus, we thought we knew Cyrus, and now she seems to love spending most of her time blowing all that back in people's faces. That would be fair enough — all child stars should be allowed to grow up and out of the boxes they'd been in — if not for the fact that Cyrus also seems to love being as offensive as possible. And not in a compelling or thought-provoking kind of way, but more in a Cyrus making date rape jokes kind of way. We probably should have been able to see this coming since it was all launched by the Cyrus' twerking routine at the 2013 Video Music Awards, but she continues to surprise us with the new depths she's willing to sink to for attention.

No one can deny that it's certainly working for her. Since revamping her image, she's become one of the most talked about celebrities in the world when she might have otherwise faded into relative obscurity as yet another former Disney star who never quite popped. Say what you want about the spectacle that Cyrus makes of herself, but it sure gives the media a lot of talk about. Even negative press is still press and Cyrus is making money off the same stunts that cause people to roll their eyes in disgust or drop their jaws in shock.

However, when will she finally admit that she's taking it too far? Date rape is not a punchline, rape itself is never funny, and there are just some things that Cyrus should know better than to treat so casually. When Dolly Parton said Cyrus doesn't have to be so drastic, she was basically summing up the feelings of just about everyone who has become resigned to what Cyrus is trying to do. She has achieved notoriety. She has pissed off as many people as possible. She has put as much distance between herself and Disney as possible. When does it end?

If her show at GAY was any indication — well, an indication of anything other than her tasteless humor — then Cyrus' exhibitionism isn't ending any time soon. In addition to her date rape joke, she also took the opportunity to call out her former fiancée Liam Hemsworth in a expletive-laced for breaking her heart.

Cyrus admits that the song "Wrecking Ball" went out to all the "motherf**kers that broke my heart, particularly one", but she also said something else that was very telling:

I’m gonna take all my clothes off, I’m gonna sit on a big, giant dick—sometimes two—I’m gonna swing around, and then I’m gonna hold the record for the most-watched music video on Vevo.

Sure, it was intended as a big middle finger to her exes, but it can also be taken as a declaration to all of her detractors. You don't have to like Cyrus, but she's going to keep doing what she's doing and everyone's going to continue to talk about it. And she's right, which is what makes it all so sad. Maybe her drastic behavior will only last as long as the Bangerz tour and she'll get a new gimmick for her next album. Maybe this is the Cyrus we'll all have to learn to love (just like we all just love Justin Bieber). Either way, she can't be tamed no matter how much we might want her to stop. We'll just have to hope that this is the last time she'll resort to a subject like rape just for the shock value.