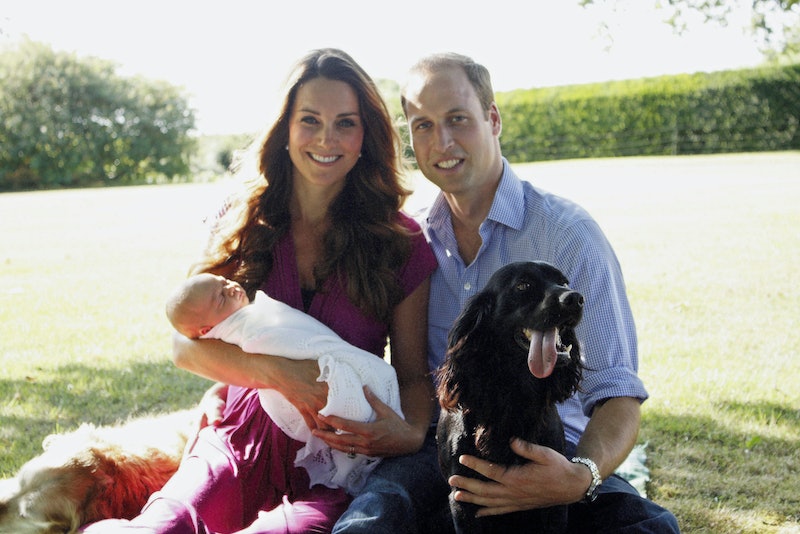 You guys! Kate Middleton, Prince William, and Prince George's four-legged friend, Lupo, is writing a children's book. (We'll paws here and let you take that news in/groan at that pun we just made.) And it sounds — we admit it — kind of hilariously adorable, meaning it's sure to be a bestseller hit. The love of a boy and his dog is very real. And it has everything one could want from a precocious puppy tail (erm, tale), and we're so excited about it we've already got a bunch of sequel ideas we want to pitch.

According to a press release, Lupo and the Secret of Windsor Castle (out this September so get ready!) is described as following the royal pooch on an exciting adventure set at the royal compound. "Lupo is out for a walk with Nanny and the Prince in Kensington Gardens when he is lured into the web of a terrible crime," the release stated. "Cyrus the swan has been attacked, and some precious royal treasure stolen. Lupo is innocent but his reputation is in tatters. Can he prove his innocence?"

And the best part? The bad dog is actually a corgi — y'know, the Queen's breed of choice? "Meanwhile, his rival, Vulcan the corgi is plotting to take over the realm. Animals take sides in a classic battle of good versus evil, involving journeys through underground tunnels, down the hallowed corridors of historic palaces, and in the staterooms of the most important people of the land. At the heart of this story is the loyal bond between Lupo and the baby prince." Admit it: you aww'd at least three times while reading that. You did I know you did (because I am watching you through the window over there — surprise)!

So, with that in mind we've crafted a few more story pitches for the sure-to-be-greenlit sequels. Lupo, welcome to your literary dynasty.

Lupo and The Mysteries of Big Ben

Feeling the pull of adventure, Lupo embarks on a trip to investigate the inner sanctums of Big Ben. During his escapades he happens upon a shadow-y group of important leaders making plans for a huge event, putting him in great peril. Will Lupo escape Big Ben with his tail intact? Who is this shadow-y group (spoiler alert: it's the Illuminati) and what do they want with London? Only Lupo holds the key (literally. He swallowed it) to all these questions and more.

Lupo Versus the Parliamentary Pets

Visiting the center of the U.K.'s political world, Lupo gets into a bit of a scrape with some of the parliament's most powerful cats. Evil mastermind Larry uses his power as Chief Mouser to the Cabinet Office to convince several parliamentary pets to join his cause in the name of eradicating all dogs from London, forcing Lupo to enlist the Queen's corgis, Willow and Holly, into a an unlikely friendship in the name of animal equality.

Lupo Battles the Domestic Policies of Willow and Holly

Willow and Holly, the royal corgis of Queen Elizabeth, are a very entitled lot. In fact one day the dastardly duo steal Lupo's chew toy (and Prince George's favorite rattle). Enraged from the betrayal, Lupo embarks on a Taken-esque trip to find and return George's rattle and free his chew toys from the corgis evil grasp. But is he any match for the royal guard?