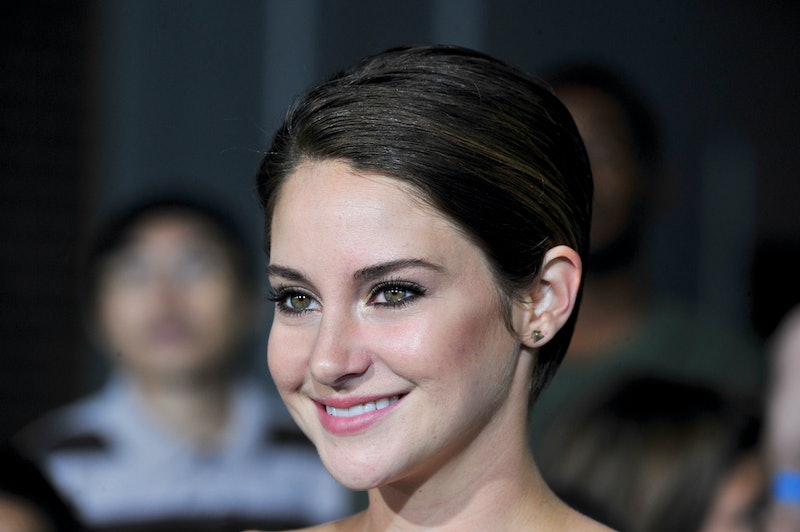 Over the past few years as an entertainment journalist, the actor I've interviewed the most, who I've seen most frequently at junkets and who has appeared most often on the screens of screening rooms across Hollywood, is undoubtably Shailene Woodley. The actress, known for her work in The Spectacular Now, Divergent, and George Clooney's The Descendants, is cinema's most valued young asset. She was up for the role of Katniss Everdeen in The Hunger Games (of course Jennifer Lawrence ultimately snagged the role), and was offered the coveted role of Anastasia Steele in the upcoming 50 Shades of Grey franchise. To put it mildly, everyone wants a piece of Shailene. So when some of the biggest roles in Hollywood are falling at her feet, it comes as a small surprise to hear about the one role Woodley couldn't let slip through her fingers: That of Hazel Grace Lancaster in John Green's novel to big screen adaptation, The Fault in Our Stars .

Bustle attended a private screening of the film presented by BuzzFeed, and the actress, along with co-star Ansel Elgort, producer Wyck Godfrey, director Josh Boone, and author John Green, were on tap to answer questions after the film. Woodley, in her usual laid-back manner, addressed why this role was so pivotal.

"Yeah man," she began, "I read the script two years ago and read the book immediately after. It was more that I was just so keen on this movie being made, more than anything. You're right for a role or you're not right for a role, so I wanted a chance to audition," she said. "I was just like this movie, this book, this is going to be so healing for so many people. And those messages are so beautiful and so important and movies like this aren't being made. The fact that they did make a movie where their lead female has a cannula in the whole time — I was so moved by it. I really wanted the movie to be made for other people to experience it. I was lucky enough to audition."

The producer of the film, Wyck Godfrey, chimed in to joke: "She said she would be the caterer if she didn't get the part, which I would have liked to have tested."

At which point the author of The Fault in Our Stars, John Green, chimed in to say: "That would have been some good food man, I definitely would have not gained the weight that I gained on set."

All joking aside, Wyck, director Josh Boone, and John Green all agreed that Woodley was the perfect Hazel. But for the now-seasoned Woodley, it was a perfect script that made her job easy. "When there's a script that's so perfect and a book that's so perfect, it was just for me, knowing your lines, showing up on set and actively listening, because the worlds were so truthful, the moments had to naturally unfold."

And while the mental preparation was as easy as that, Woodley was dealing with a character who had to constantly deal with the very-real issue of a failing set of lungs. While many of us are lucky enough not to ever experience this problem, John Green's character of Hazel is not, so how did Woodley prepare?

See Woodley's interpretation of Hazel Grace Lancaster when The Fault in Our Stars hits theatres June 6.