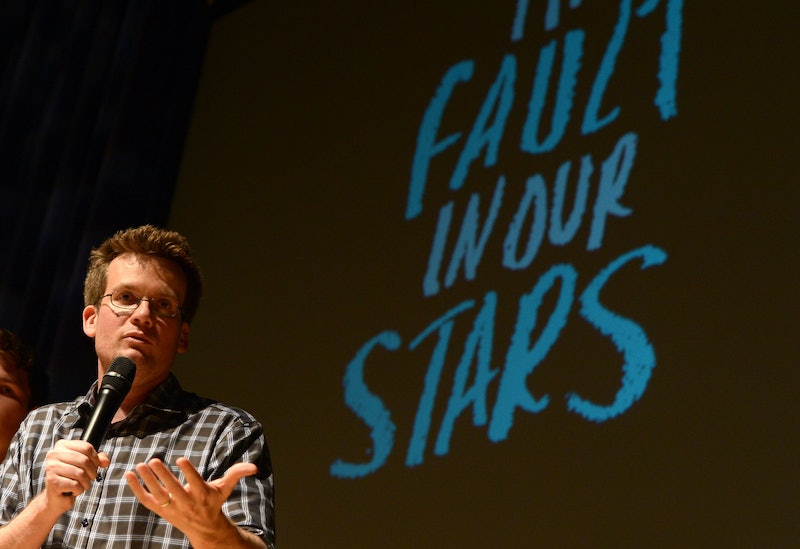 As long as books and cinema have existed in tandem, there has been a want for book-to-big-screen adaptations. We've seen it with all of the classics, from Shakespeare to Jane Austen to Faulker, people like to see their favorite films blown up with moving pictures. But it wasn't until very recently that young adult novels, those books catering to the angsty in-betweeners, have seen a surge of cinematic adaptations. From Harry Potter to Twilight to The Hunger Games — heck, even The Hobbit was a children's novel — these words have been hungrily devoured as they transformed into film. And while the latest anticipated adaptation, The Fault in Our Stars, won't be out for another month, we were lucky enough to hear from the author himself about what he believes makes the YA genre so special.

John Green spoke after an advanced screening for the film put on by BuzzFeed, along with the film's producer Wyck Godfrey, director Josh Boone, and stars Shailene Woodley and Ansel Elgort. When asked about the appeal of this particular audience, he offered some particularly enlightening words:

And if we look at Green's novel, all of these themes — love, suffering, and certainly grief — are at the forefront of his writing. Hazel struggles with the idea of falling in love with Gus because she knows their time together is much more limited than most. As she puts it, she is a "grenade" that will "obliterate everything in her wake." Green continued:

"They ask these questions without any irony and with real enthusiasm, which I think sometimes to us comes across as naivety, but I don't think it is. I think it's lack of irony, lack of fear. The same way they approach emotional experiences with a lack of defensiveness. I find that very appealing as character traits to write about because I'm also not particularly interested in irony as a device to get at meaning. I'm much more more interested in stripping it down and finding a way to tell emotionally authentic stories that aren't sentimental."

And while they are truthful and pure as subjects to write about, this is also the same reason that this age is a compelling audience for Green.

"I also like them as readers for the same reason. They don't have that bright line between high culture and low culture, they don't think there's anything weird to say their two favorite books are Gossip Girl and Gatsby, and I find that really appealing. We have these really set ideas about genre and what constitutes high art and low art, and they don't. I like being able to play in that world with them."

So what did the author himself think of his novel's big screen transformation? "I couldn't be prouder. I'm just so, so thrilled with everybody who made the movie, they just did an amazing job."

Well, there you have it, from the man himself. The Fault in Our Stars hits theatres June 6.