In back-to-back Real Housewives of New York City episodes, Kristen Taekman splashed Ramona Singer with water. And yes, Ramona went absolutely apeshit both times. Ah, who doesn't love a recurring bit? Two episodes ago, Kristen threw water at Ramona's freshly styled hair while they were at a spa, and Ramona retaliated by throwing the contents of her champagne glass at Kristen. Toward the end last week's episode, Kristen splashed Ramona at the lake, and Ramona threw an actual glass at Kristen. The glass cut Kristen’s face.

Ramona threw a glass at Kristen and the glass cut her face. Crimeny, Ramona!

Tuesday night, we’ll watch Ramona apologize. OR WILL WE? In a preview clip, we see part of what could be one of the worst apologies in Housewives history.

A few of the weaker Housewives mea culpas that come to mind: Brandi Glanville of Real Housewives of Beverly Hills begrudgingly hugging Joyce Giraud after they apologized to one another. Real Housewives of Orange County's Tamra Judge and Gretchen Rossi's tense "resolution" at Vicki Gunvalson's Winter Wonderland party. Any time Real Housewives of New Jersey's Teresa Giudice attempts to make amends with Joe and Melissa Gorga, but inevitably resorts to shrieking at them. I could go on and on.

Here are seven reasons Ramona's whack apology belongs next to the aforementioned examples in the Real Housewives Bad-pology Hall of Fame:

The clip begins with Ramona saying she’s sorry. Awesome start, Ramona! Keep going! Kristen asks if this is an apology. What we hope Ramona says: "Yes."

What Ramona actually says: “Sort of, I guess. I reacted. You threw water at me."

Aha. Okay. So she isn't that sorry after all.

She Refuses to Let Go

Rather than concede that she overreacted (it was WATER, for shit's sake), Ramona stands by her impulse. A stubborn apology is not a real apology.

This Line of Reasoning:

“You hurled water at me. I hurled what I had in my hand.”

I see. Well then. Kristen should be grateful Ramona wasn't holding a pickaxe at that very moment.

Some apologies diffuse conflict. This "apology" inspires Ramona and Kristen get within inches of one another’s faces and scream.

Ramona tells Kristen she didn't mean to hit her with the glass, and says she's sorry Kristen got hurt. She never actually apologizes for hurling an object at Kristen the first place.

When Ramona asks to see Kristen's lip, it doesn't come from a place of concern. Her tone is patronizing. As if that isn't enough, she tells Kristen “it looks fine” and that she's "exaggerating.” Missing the point, Ramona!

“Who are you to get me wet?!” Ramona screams over and over. Sure, Kristen miiiight've been trying to get a rise out of Ramona (she'd seen Ramona react to the water before, she continued to splash even when Ramona asked that she stop), and she shouldn't have poked that wasp's nest again. But! That's an entirely different issue. 1) Kristen didn't make Ramona throw the glass. 2) Kristen splashing water in no way justifies what Ramona did. 3) IT WAS JUST WATER.

Here's hoping the big twist of Tuesday's episode is that Ramona offers up a genuine apology and the two of them resolve their differences. HAHAHAHAHA, that'd be something!

Ooh, I bet the splash-and-throw trope will pop again. Rule of threes! 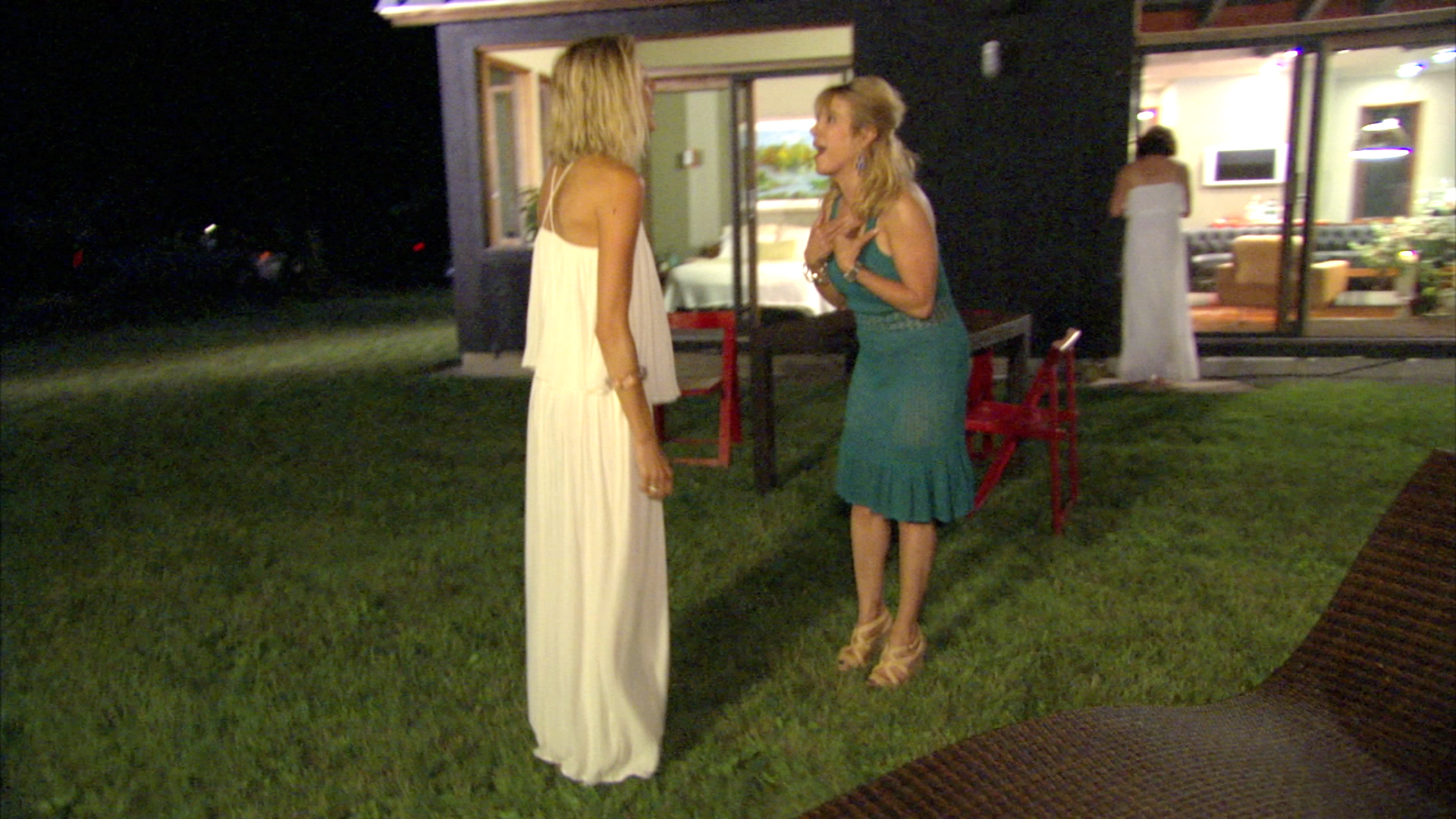