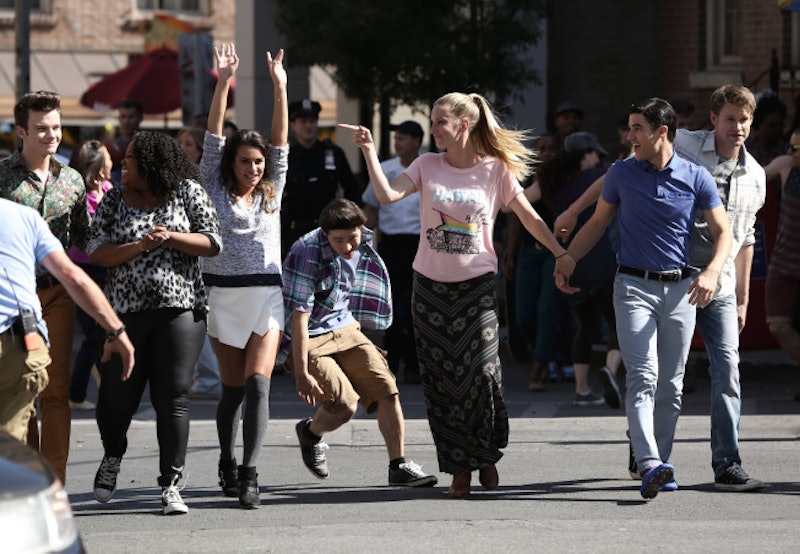 Well, I guess I should've seen this coming. Glee 's Season 5 finale aired on Tuesday night and all of our worst fears were realized when the episode ended with the promise of a time-jump. Okay, it ended with Rachel leaving to go to L.A. to film her pilot — but before that joyful moment, Glee borrowed a scene from the Season 4 finale of a TV show we all know and love: The CW's long-running drama One Tree Hill. Which more or less gives me the feeling that Glee Season 6 is headed for the same, ridiculous fate as OTH's Season 5.

First, let me say that I'm a huge, epic fan of OTH. (I've seen each season — especially the first four — at least three times each.) So when Brittany referenced the series in 2011, saying that she didn't want to die before it was cancelled and when Kurt renamed his band during Season 5, "One Three Hill," I was overjoyed. Long live Lucas Scott — am I right, people? But anyway, following an episode where more or less nothing happened (except a lame excuse for Santana's absence), it became clear that Ryan Murphy is, in fact, an OTH fan as well.

After running outside to see Sam's dream realized — his abs were plastered on the side of a city bus — the NYC crew shared an emotional moment about going their separate ways. Mercedes leaving to go on tour; Sam going back to Lima; Kurt, Artie, and Blaine staying in New York; and Rachel hopefully going to L.A. (Still no idea what Brittany's up to but that's cool.) Rachel lamented that she couldn't bear to lose her friends after losing the glee club and Finn already this year and Mercedes was all like, "You're not losing anyone, we're friends forever!" And, for the first time, Glee actually teased its time-jump.

Rachel and her friends agreed that in six months, no matter where they were and what they were doing, they'd meet back on that same street corner. And it basically sounded a lot like this (skip to the 3-minute mark):

First, nice job, Murphy. You've snuck in an OTH reference whenever you could — but does this mean we're going to get a terrible Season 6? After all, as Season 5 of OTH taught us, no time-jump is a good time-jump. And, as a fan, you should know that, Murphy.