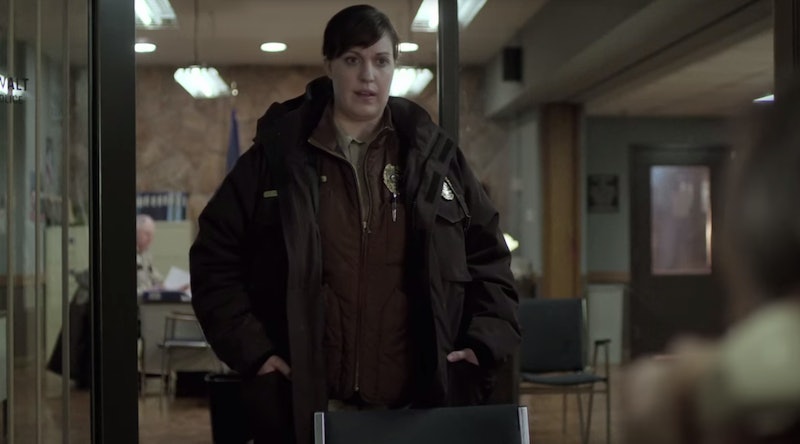 “Only a fool thinks he can solve the world’s problems,” Ari Ziskind tells Gus Grimly over a glass of milk. It’s the moral of the parable Grimly's neighbor shares during Tuesday night's episode of Fargo. “But ya gotta try, don’t ya?” Grimly asks. And try is what Grimly is going to do. He'd rather be a fool than sit idly by. He wants to try to solve as many of the world's problems as he can. He's zeroed in on one blip: Lorne Malvo. He doesn't know just how bad the walkie talkie creeper is, but Grimly knows he's a bad guy. He knows this for darn certain. Grimly isn't a detective, nor does he believe himself to be "amazing" like Molly Solverson, but by golly, he's going to do what he can to help her catch Lorne Malvo. One less problem to worry about.

How's the Amazing Solverson doing? Uff da, she is so close to piecing everything together. She theorizes that Lester Nygaard might’ve hired Lorne Malvo to murder Hess, and now Lorne Mavlo is after Lester for the money. She and Deputy Oswalt visit Lester in his holding cell for questioning, but find that Lester's hand is taking Lester down with it. They call an ambulance. During the ride to the hospital, Solverson asks Lester about Lorne Malvo. Lester says he never paid Lorne Malvo to kill Hess. Even so, Solverson senses something is up.

Solverson and Grimly are obsessed with this case. Eat, sleep, breathe status. The pair hangs out, but it's strictly business. No official dates on the docket. Grimly wants to solve the case because he knows there’s a bad guy out there. A bad guy who slipped out of his clutches once before. He can make the world a slightly better place if he gets rid of that bad guy. If only he could figure out how.

Fortunately, Grimly has Solverson as an unofficial teammate. Solverson wants answers. The mystery is festering, like an infected shotgun shrapnel wound. She cannot rest until it’s solved. She will do what it takes to get those answers. She will reach under the doormat for a key and let herself into Lester's home. She will wipe her feet on the mat first, of course. She's civilized. She isn't a wolf.

She wants answers, yes. But she also wants to avenge the murder of her former boss/friend’s husband. Solverson visits Chief Thurman's widow in the hospital after she gives birth.

“I don’t want any details," Ida Thurman says. "Just tell me you’re taking care of it.”

More like this
Michael & Kathleen Peterson’s House From ‘The Staircase’ Has New Owners
By Kadin Burnett and Kayla Blanton
What’s New On Netflix: A Victoria Justice Rom-Com & The Return Of David Letterman
By Arya Roshanian
Will Vampire In The Garden Get A Season 2? What To Know
By Kadin Burnett
'Bridgerton' Season 4 Will Likely Focus On This Brother's Divided Heart
By Grace Wehniainen and Alyssa Lapid
Get Even More From Bustle — Sign Up For The Newsletter