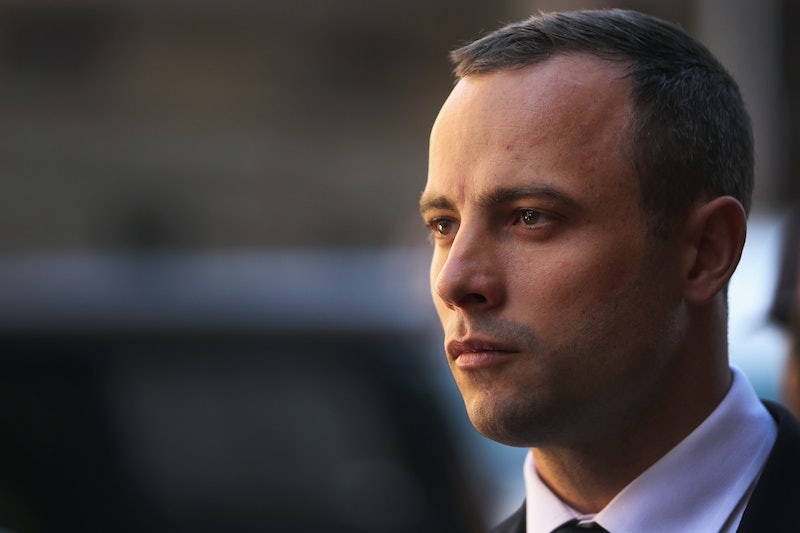 On Wednesday, Judge Thokozile Masipa made a game-changing decision: Pistorius is required to undergo a 30-day psychiatric evaluation to examine his mental state when he shot and killed girlfriend Reeva Steenkamp on February 14, 2013. Judge Masipa's decision follows the testimony of forensic psychiatrist Dr. Merryll Vorster, who told the court Monday that Pistorius suffers from generalized anxiety disorder.

Pistorius' defense team, led by Barry Roux, had hoped that this testimony would prove that. within the parameters of Pistorius' anxiety, the Blade Runner acted "reasonably" in response to perceived peril. However, this strategy backfired. Following Vorster's testimony, during which she told Gerrie Nel that an individual in Pistorius' mental condition would be dangerous when armed, Nel told Judge Masipa that he had ”no other option but to ask for a study of Pistorius’ mental health.”

According to Vorster, the amputation of Pistorius' legs at only 11 months old, his highly security-conscientious mother who slept with a gun under her pillow, and his estrangement from his father all contributed to his anxiety. As a result of this anxiety, Vorster said, Pistorius is prone to perceiving threats where none objectively exist. Vorster believes that it was this tendency to depend on the "fight" rather than "flight" reaction that led to Steenkamp's tragic death.

The generally accepted timeframe for such an evaluation is 30 days, and observations are normally carried out within psychiatric hospitals. Pistorius will be assessed by a psychiatrist, who may administer tests and conduct investigations, and he will also be observed by nurses. Following the observation, a panel of experts will prepare a report for the court that will then figure prominently in Judge Masipa's verdict. There appear to be a few possible outcomes as a result of this evaluation.

If the evaluation determines that Pistorius was "mentally incapacitated" when he shot and killed Steenkamp, the trial would end immediately on a not guilty verdict, as South African law mandates that those suffering from mental illness cannot be held guilty for such a crime. However, this would also mean that Pistorius would be committed to a mental institution, likely against his will.

He would remain under observation and in such a facility until no longer deemed a threat to society.

The panel could lead Judge Masipa to believe that Pistorius' mental health and his anxiety played a role in Steenkamp's death, which would likely result in a lesser sentence. Pistorius' psychiatric condition would be taken into consideration, and even if he were to be found guilty, the extent to which he would be held directly responsible would be lessened.

This was the original point Roux's defense team attempted to make with Vorster's testimony, as the psychiatrist herself said that the court could find that the Blade Runner had diminished responsibility in Steenkamp's death.

The most damning conclusion the panel could make for Pistorius would be a complete disagreement with Vorster's testimony. If the evaluation finds that the athlete's mental condition was not at all compromised by anxiety or any other mental illness, the defense would lose a major component of its argument. In this case, Judge Masipa would have to disregard Vorster's testimony altogether, and assume that Pistorius acted as a mentally-stable individual. If this happens, Pistorius could face the life in prison sentence for premeditated murder.

Judge Masipa's decision will further delay an already elongated trial, as the case which was originally slated to take only two weeks is now over two months long. But Judge Masipa's aim is not to expedite the trial, as she said, "This is not about anyone's convenience, but rather about justice being served." According to the judge, "it's clear Oscar Pistorius has a psychiatric illness."

The court has temporarily adjourned, and will reconvene on Tuesday when Judge Masipa will inform Pistorius as to where and when his observations will take place. The psychiatric evaluation will delay the trial by at least 30 days, but it is possible that the athlete will have to wait longer in order for the court to secure an opening in a mental hospital. The wait list for these institutions can stretch to nearly six months, but given the high-profile nature of the case, it is likely that Pistorius will have to wait only a week or so.

Judge Masipa has made clear that "the aim of the referral is not to punish the accused twice," and as such, the court will move to examine Pistorius as an outpatient rather than committing him to an institution. This would mean that Pistorius could return home every day after his evaluations.

Pistorius and his team was initially extremely against such an evaluation, with Pistorius calling it "a joke." Judge Masipa called it "strange" that Pistorius was so averse to the mental observations, and said "the effect of the evidence is that a doubt has been created that the accused may possibly have another defense relating to his criminal responsibility."

The evaluation could, in fact, work in Pistorius' favor, at least in terms of reducing a prison sentence. Since the ruling, however, PIstorius' uncle, the family spokesman, has released a statement expressing their relief at the ruling: "As a family, we are comforted by the thoroughness and detail of this judgment and Judge Masipa's commitment, using every avenue, to ensure a fair trial."