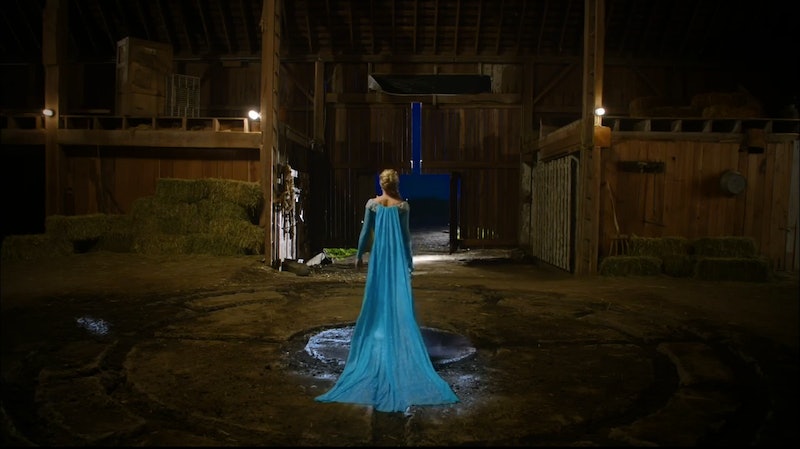 Once Upon a Time is known for taking fairytales and turning them on their heads. This is the show that turned Snow White into a bandit, the Evil Queen into a hero, and Rumpelstiltskin into an anti-villain we wanted to see fall in love with Belle from Beauty and the Beast. With the announcement that Once Upon a Time will be adapting Frozen in their next season, plus the news that they won't just be redoing the movie, the creators have left us with a lot of questions about exactly how they plan to take Frozen from the big screen to the small screen... especially within the context of the show.

Although Frozen is quickly becoming the most beloved movie that Disney has ever done, the storyline still leaves a lot of room for alternate interpretations that the Once Upon a Time creators can take full advantage of. No movie is perfect and there are probably huge chunks of the plot that will have to be discarded in order to explain Elsa's presence and future actions in Storybrooke. While there are a lot of theories about why Elsa is on Once Upon a Time, there seem to be fewer theories on what exactly Once Upon a Time has in mind for Frozen.

Theory 1: Elsa has a vendetta against Rumpelstiltskin, which makes her the bad guy now that he's good.

This theory seems like the most likely one considered she broke out of an urn that had been in his vault, but Elsa would be joining the ranks of OUAT anti-villains if she had a good reason for her evil actions. Wanting to punish Rumpelstiltskin for something that he did to her back when he was still the Dark One is the best reason that there is and she's got no reason to believe the heroes when they tell her that Rumpel has changed his ways.

Theory 2: Rumpelstiltskin is Hans and, as the Dark One, did something terrible to Anna.

Rumpelstiltskin has been, well, Rumpelstiltskin, but also the crocodile from Peter Pan, the fairy godmother from Cinderella, and the Beast from Beauty and the Beast. He seems to have a running habit of being in several fairytales at once, so who's to say he didn't once head over to Arendelle disguised as a handsome prince of the Southern Isles and manipulate Anna? It's no wonder Elsa would want revenge.

Theory 3: Instead of turning people into flying monkeys, Elsa turns them into Olaf.

If Elsa does turn out to be the villain of season four, then she's going to need a gimmick. While the Wicked Witch, Zelena, had a fondness for turning people into flying monkeys, maybe we'll get out first glimpse of Olaf as one of the many snowmen that Elsa starts turning people into. He might even be her first snowman, the one who acts as her sidekick because he reminds her of Anna.

Theory 4: The trolls are in Rumpelstiltskin's shop.

Rumpelstiltskin keeps everything of importance in his shop and there never seems to be enough time in the world to go through all of it. If there's a rock collection in there, who's to say that those rocks aren't actually the trolls? Maybe Rumpelstiltskin goes to them for advice on how to deal with Elsa and they give him the cryptic kind of help that ends up ruining his life... just like in the movie.

We don't know how long Elsa was trapped in that urn or what happened in the Enchanted Forest after she came with Emma and Captain Hook to the future. Maybe Elsa never got the chance to become the Queen of Arendelle and Anna was crowned in her place. Hopefully, this is after Anna met Kristoff. After all, Anna is the girl who entrusted her kingdom to the fiancée she just met that day.

Considering the fact that we just learned that it was Regina who executed Robin's wife and Roland's mother, Maid Marion, this no longer seems outside the boundary of imagination. Regina will have to answer for her crimes against Marion in season four, but who's to say that Elsa and Anna's parents aren't also among her list of casualties?

Theory 7: Sven is in the Storybrooke stables.

Did you forget that Storybrooke has stables? So did the show, considering they haven't come up since David took Henry to the stables in "The Doctor". Maybe Once Upon a Time exists in a world where Anna never met Kristoff, because he's been living around the stables taking care of his reindeer-horse this whole time. In a big town like Storybrooke, it could happen.