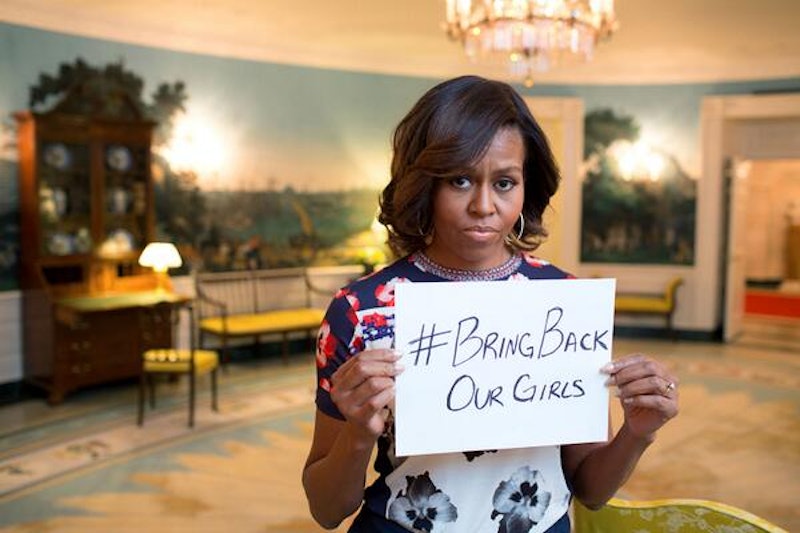 Um, okay. First Lady Michelle Obama wants to #BringBackOurGirls like the rest of us, but apparently when she uses her platform for anything remotely political, it's seen as "a gamble," as Politico noted in a headline Wednesday. That's ridiculous — and pretty sexist, too. Seriously, Rush Limbaugh and everyone else, stop attacking Michelle Obama for putting her considerable influence behind an effort to educate people about hundreds of kidnapped young women who committed the crime of attending school. Obama's a brilliant woman, and she's allowed to share her views on more than just healthy eating (though we appreciate that, too).

On May 7, the First Lady sent out a tweet to her 857,000 Twitter followers (Mobama enjoys widespread approval). In the photo, Obama's looking at the camera solemn-faced while holding a sign reading #BringBackOurGirls. She was far from the first person to tweet a photo like it; the image from FLOTUS' account expressed solidarity with protestors in Nigeria, not to mention millions of people all over the world, who held similar signs aloft to bring attention to an issue that the world ignored for weeks after it happened.

But of course her decision to support a nonpartisan movement to raise awareness about a bunch of kidnapped young women became controversial. Rush Limbaugh, Ann Coulter, and other conservative pinheads — to borrow a term from my buddy Bill O'Reilly — chimed in to offer their opinions about how garnering support for causes on Twitter is stupid and so is FLOTUS.

Both opinions are condescending and, unfortunately for their proponents, at odds with reality. Here's why.

One of the reasons the GOP lost the last presidential election (and the one before that) is its repeated misunderstanding of how and why people use social media, and this is a prime example. Some people argue this isn't true, but a look at Mitt Romney's awkward Flickr posts and Instagrams compared to Obama's meticulously edited propaganda from the 2012 election cycle should set them straight.

Anyway, Rush: Social media is not seen by its users as a sole means of effecting change. More often, it's a way to communicate and spread or share ideas. No one who tweeted out the #BringBackOurGirls hashtag thought they would bring back the young Nigerian women solely by sending a tweet.

The hashtag was a direct response to widespread ignorance about what happened to the young women, not to mention the Nigerian government's unwillingness to take action to rescue the women or investigate properly immediately after the kidnappings. In fact, #BringBackOurGirls started offline, as The Wall Street Journal has noted. Spreading awareness is a perfectly logical response to the government's failure, because embarrassing the Nigerian government on a global scale is not a bad way to get that government to change its methods and try harder to find the young women. International embarrassment is a powerful weapon.

Rush Limbaugh said this about Michelle's move to show her support for the women:

I just think this is pathetic. I'm just stunned. We got 300 Nigerian girls kidnapped by an Al-Qaeda group, and nobody cared or talked about it for a while. Hillary wouldn't call 'em a terror group. Now, all of a sudden, for some reason, we're on a big push to get 'em back and this is how...?

...The sad thing here is that the low-information crowd that's puddling around out there on Twitter is gonna think we're actually doing something about it.

It's Bring Back Our Girls. Apparently there's a Twitter... What do you call 'em, handle? It's the number sign "BringBackOurGirls."

Right. That number-sign thing the low-info crowd's usin' these days.

The real reason Limbaugh and other commentators have their panties in a bunch isn't really their confusion about the purpose of social media or even their supposed "concern" for how Michelle Obama's activism could affect the administration's actions. In most cases, it's probably enough for most of these commentators that the First Lady decided to express an opinion on a foreign policy issue, or really anything at all beyond the White House gardens.

Now's probably a good time to remember that although she's consciously chosen to remain mostly apolitical (at least to the public) during her tenure as First Lady, Mobama is crazy-credentialed, in addition to being a style icon and a pretty great mom. To the vast majority of people, the kidnapping of more than 200 young women from a school in Nigeria and that government's inaction isn't an issue of U.S. foreign policy; it's about how women are valued, or not, internationally. The kidnapped #ChibokGirls are still out there, and Obama was one of many millions of people aiming to give their plight a voice.

Besides, if anyone can effect change merely by sending out a tweet, it's her.