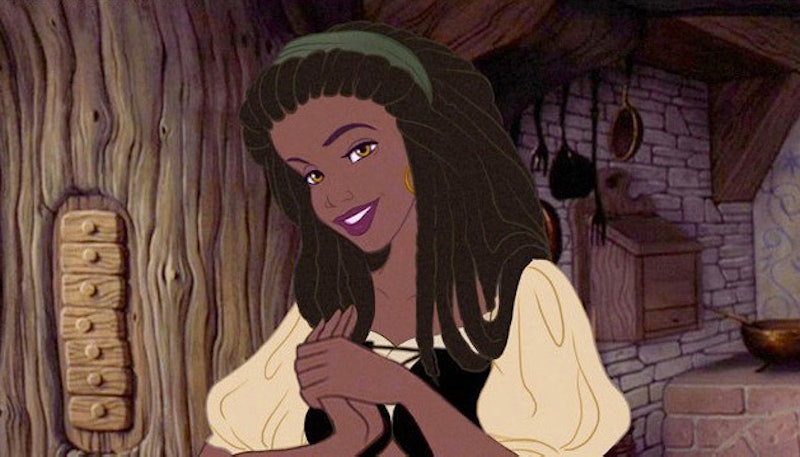 Disney has long been a metaphor for American society: its early days were plagued with racism and sexism, but over time it's gradually become a place of diversity and free-thinking, totally badass women. As society opened its mind to change, so did Disney; as gender norms were challenged, the role of "princess" was redefined, and other races were included into the mix. These boundaries continue to be challenged today, and the latest reimagining of Disney comes courtesy of lettherebedoodles artist TT, who has drawn some of the most famous Disney princesses as different races.

After TT posted the creations on her Tumblr, they were met with a mix of praise and criticism. But the artist eloquently explained what her intentions were: "I feel like there’s beauty in every racial background, and this is honestly nothing more then an exploration of different races from a technical and artistic standpoint."

Either way, they are pretty neat, and do an excellent job at recontextualizing these familiar Disney princesses in an unfamiliar way — something that little girls can look at and think, "Hey, Asian Cinderella seems pretty cool too." Check out the drawings below.

Ariel From The Little Mermaid

Belle From Beauty and the Beast

Why is this important for Disney's audience, and for society as a whole, you ask? Well, it wasn't long ago that Disney was still sending out some pretty dangerous messages to its young viewers. I remember obsessively watching The Little Mermaid, Beauty and the Beast, and Aladdin as a child. All three were played on repeat, in a constant rotation. I even bought (or had my parents buy, rather) the corresponding song books and soundtracks on cassette tape and learned every song by heart. What I didn't realize at the time was that I was also learning some pretty antiquated life lessons.

Today, Disney has come a long way since those days, but it still has a ways to go yet before it mirrors the diverse society in which we live. My bet is that if we continue to think outside the box, as TT has, then we'll be well on our way.

More like this
The 'Hocus Pocus' Sequel Finally Has A Release Date & It Makes Total Sense
By Shannon Barbour and Radhika Menon
Sandra Bullock, Girlboss Extraordinaire
By Matt Harkins & Viviana Olen
Remember These Ancient Pieces Of '90s Tech?
By Lucia Peters and Emma Carey
11 Trends From The ‘90s That Made You Feel So Cool
By Julie Sprankles
Get Even More From Bustle — Sign Up For The Newsletter