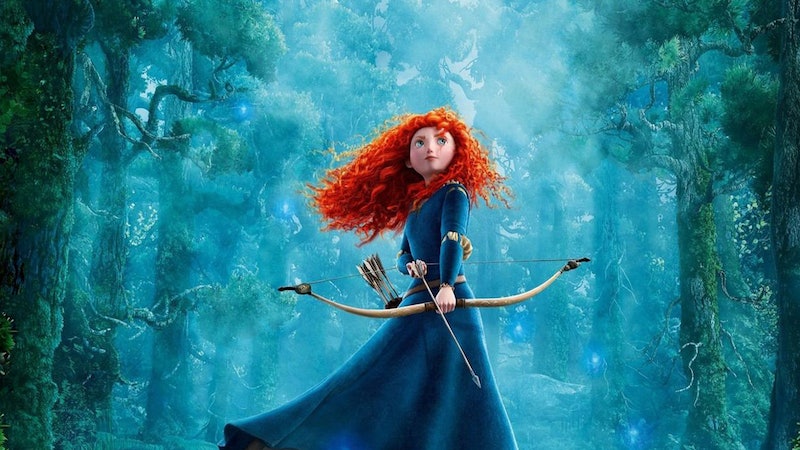 If you didn't love Brave before, here's another reason to: In addition to being one of the only princess films that actually presents a strong female lead character, the director is kind of a badass. In new comments made to Time, Brave co-director Brenda Chapman commented that animation is "run by a boys club," in response to some recent statements by the head of animation on Disney's upcoming film Frozen. He said women were hard to animate because of their emotions. Say wha--?

OK, so if you haven't been keeping up with the controversy surrounding animator Lino DiSavlo and his upcoming film Frozen, let me first get you up to speed: In short, DiSalvo made some comments in a recent interview with Fan Voice about how "difficult" it is to animate women because, go figure, when they experience emotions, their face changes and "you have to keep them pretty" as it does.

So, basically, animating women is hard because they EXPERIENCE EMOTIONS. Ugh, SMH already, and I haven't even finished. Also worth noting is that, prior to DiSalvo's comments, Frozen was already receiving some criticisms because the main characters Anna and Elsa look remarkably similar to the lead character in Tangled: That is, flawless white skin, wide doe eyes, and luscious, flowing locks.

It's all made worse by the fact that animation is generally a male-dominated profession, and studios are content with this because all they want to do is have a pretty princess female character that they can slap onto every product possible for the next year or so, teaching children that this is what they should covet.

After DiSalvo's comments received a lot of backlash on the web from critics (yours truly included), a Disney spokesperson promptly released a statement saying that DiSalvo's comments were taken out of context, and "as part of a roundtable discussion, the animator was describing some technical aspects of CG animation and not making a general comment on animating females versus males or other characters."

It's the kind of PR bullshit that major companies spit out to save face, and Chapman was having none of that.

"My immediate reaction was that I was absolutely appalled that anyone would say that," she commented to Time, before adding that she wasn't surprised given her own experience working on Brave with Disney:

For Merida [the curly, red haired heroine of Brave], when we were designing her, I wanted her to have the mouth that gets really wide, and the grimace...I wanted to let her have an ugly expression or real expression … even beautiful women will have a sour look on their face when they’re upset.

This pretty much echoes comments that Chapman made in a op-ed for the New York Times , in which she described when she was actually removed from Brave — a project she came up with based on her relationship with her own daughter — and replaced with a man:

This was a story that I created, which came from a very personal place, as a woman and a mother. To have it taken away and given to someone else, and a man at that, was truly distressing on so many levels. But in the end, my vision came through in the film. It simply wouldn’t have worked without it (and didn't at one point), and I knew this at my core. So I kept my head held high, stayed committed to my principles, and was supported by some strong women (and men!). In the end, it worked out, and I’m very proud of the movie, and that I ultimately stood up for myself, just like Merida, the protagonist in Brave.

Sometimes women express an idea and are shot down, only to have a man express essentially the same idea and have it broadly embraced. Until there is a sufficient number of women executives in high places, this will continue to happen.

Last but not least, we can't forget that time she told Disney what's what when they tried to sell a revamped "blatantly sexist" version of Merida earlier this year:

I think it's atrocious what they have done to Merida...When little girls say they like it because it's more sparkly, that's all fine and good but, subconsciously, they are soaking in the sexy 'come hither' look and the skinny aspect of the new version. It's horrible! Merida was created to break that mold — to give young girls a better, stronger role model, a more attainable role model, something of substance, not just a pretty face that waits around for romance.

In short, Brenda Chapman for all the awards.