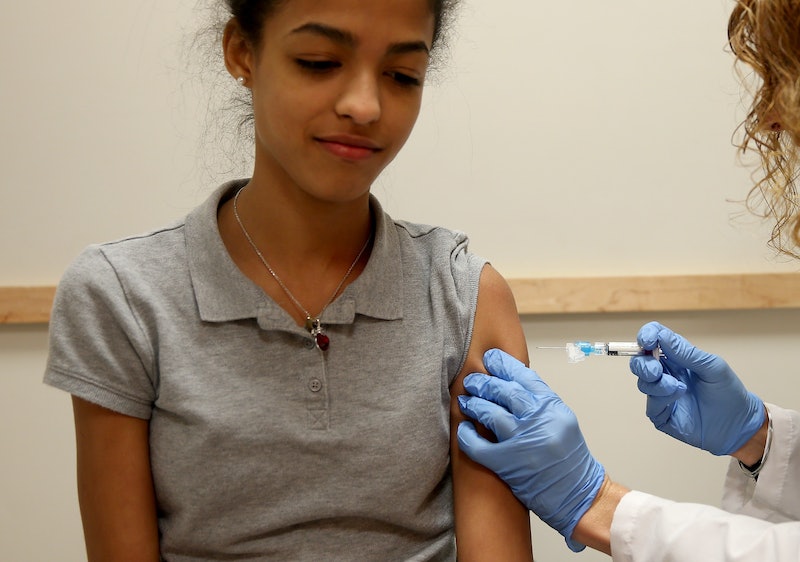 There's a new treatment for cancer on the horizon, only it's actually an old treatment: apparently a huge dose of measles vaccine cured blood cancer in a Minnesota woman whose condition was otherwise incurable, researchers have recently reported.

Why did the researchers even think to try such a thing, and why did the vaccine actually succeed in curing cancer? The way vaccines work in normal cases is they contain a small amount of weakened or killed viruses. People's bodies respond to these ingredients in a mild way, enough to form antibodies for the future but usually without actually becoming infected and sick with the disease. Previously, scientists had found that they could attract the body's attention and resources towards fighting cancer in tumors by injecting a virus locally, right into the tumor.

In this case, Mayo Clinic researchers hypothesized that they could harness the same mechanism in spread-out blood cancer by engineering the measles virus so that it became toxic to cancer cells. The test patients received a huge dose of virus-containing vaccine, an amount that could have ordinarily vaccinated 10 million people. Because the cancer patients were already immuno-compromised, the treatment was actually more likely to work: their bodies were slow at clearing the vaccine's viruses, so they had time to fight the cancer cells. Ultimately, one woman who had suffered from a type of blood cancer (myeloma) for 10 years was able to clear her system of it rapidly, and has now remained cancer-free for over six months.

This is very interesting news indeed, as cancer is a growing public health problem: cancer rates are mounting internationally, and as many as 41 percent of Americans will be diagnosed with cancer at some point in their lives. However, many additional trials of the treatment will be required before it can be safely recommended to cancer patients in general. Getting treatments approved by the FDA is a notoriously long and difficult process, so don't expect your friends or relatives to be offered the measles vaccine treatment anytime soon. Also, like most treatments, the vaccine wouldn't work for everyone — unfortunately the other cancer patient who was treated in this way was not cured, and the cancer returned after nine months. But maybe by the time we're elderly, vaccines will have become a commonplace addition to doctors' arsenals of cancer-fighting tools.

More like this
The 5 Best Pillows For Acid Reflux, According To A Sleep Expert
By Maria Cassano
Here’s Your Daily Horoscope for December 7, 2022
By Mecca Woods
69 Great Gifts For Guys No Matter What Their Hobbies Are
By Teresa Newsome, Mia Mercado and Brittany Leitner
13 Gifts From Latina-Owned Businesses For Everyone On Your List
By Marilyn La Jeunesse
Get Even More From Bustle — Sign Up For The Newsletter