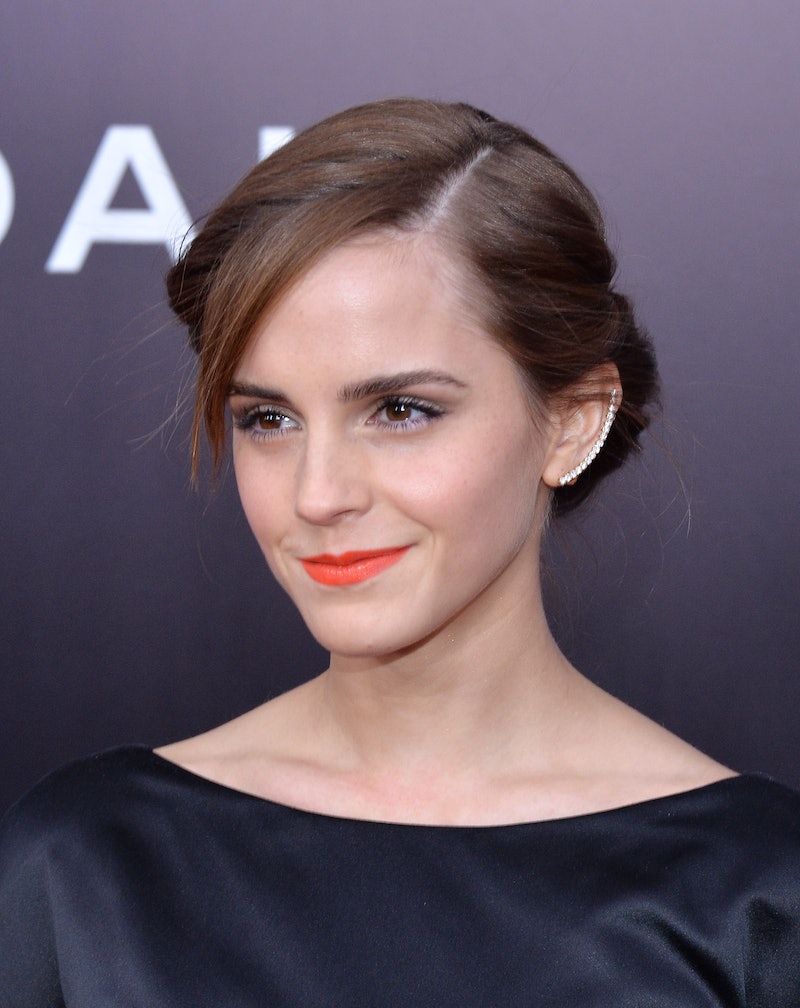 It seems like only yesterday we were all cramming into the theater to watch Harry Potter and the Deathly Hallows Part 2. All three of the main actors have moved on to other projects since then, but, despite Emma Watson proving in many ways that she and Hermione Granger are nothing alike, she's about to hit a milestone that her character would be proud of. Emma Watson graduates from Brown University on May 25, which puts her in the same boat as many soon-to-be graduates across America. Except, of course, that she'll be graduating without a mountain of student debt.

Watson has been attending Brown since 2009 with breaks to focus on her career, promote Harry Potter and the Deathly Hallows and study abroad at Oxford University in England. Now, five years after she began her academic career at Brown, Watson is graduating with a degree in English Literature and is expected to attend the commencement ceremony. Just like her character, she is the only one of the Harry Potter trio to finish her schooling. Both Daniel Radcliffe and Rupert Grint decided to take a break from school to focus on their acting career and have not looked back since.

We have no doubt that if Hermione had never been introduced to the magical world, she'd be a college graduate as well. With only ten days separating her from her degree, there are plenty of ways that Watson can choose to celebrate her graduation once she's done slaving through finals.

Emma Watson claimed to have thrown a party for 100 students in 2011, pictures from which have sadly never surfaced. If she can entertain 100 people, then imagine how much wilder a party with her entire graduating class would be. We're imagining it would be something like The Hangover meets Project X — except there's no way she'd be able to keep those pictures off the Internet.

2. Do a Little Vitamin C Karaoke

I think there's a law somewhere that says you haven't officially graduated until someone plays Vitamin C's "Graduation (Friends Forever)". If it's not a law, then someone should make it one. Watson's latest film role in Noah gave us a chance to hear her singing and it turns out that she's got some talent. And, even if she didn't, talent is the last thing you need for karaoke.

Studying takes a lot out of you, but nothing makes the world a brighter place like buying new things. When you're worth as much as Emma Watson, imagine how many closets you can fill with post-graduate outfits. Watson won't have the same need for blazers and sensible shoes as the next wave of future interviewees, but that doesn't mean she can't buy them anyway.

4. Give Hermione Granger a Shout Out

We already know that Daniel Radcliffe, Rupert Grint, and Emma Watson will be reuniting for the Harry Potter and the Escape from Gringotts ride, but that's not good enough. Considering she and Hermione Granger are now the only ones in their trio to have returned to school to finish their education, Watson could celebrate her graduation by thanking Hermione for being such a huge influence on her life even now.

5. Dance on the Stage

Remember that time that Emma Watson did a whole dance routine with Jimmy Fallon? No? Well, there's nothing stopping her from reminding everyone by busting a move on the stage when she goes up to get her diploma. Considering her name is pretty far to the back of the alphabet, I doubt she'd be holding anybody up.

6. Have a Quiet Dinner

Of course, Emma Watson is a pretty private person who won't even date other famous people. Who better to celebrate her graduation with than her family and friends with a quiet dinner in an even quieter location? A party she can save for later (or never), but her friends and family are the ones who had to keep her caffeinated during those all-nighters.

If that's not exactly how you're planning to celebrate your graduation just as soon as you can get away from your friends and family, then you are a liar.