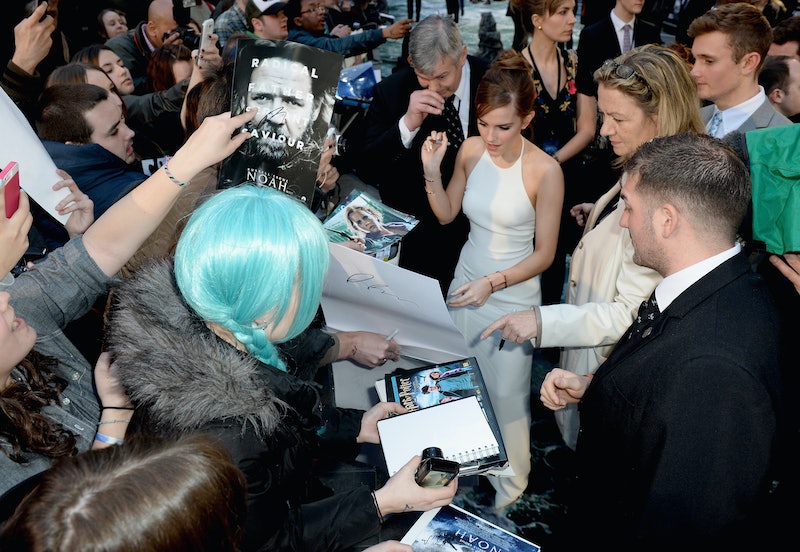 Emma Watson is the kind of celebrity who seems to have a love/hate relationship with her own stardom. She hasn't taken to wearing a bag over her head like Shia LaBeouf just yet, but she's definitely one of the most self-aware celebrities out there. Her recent comments about the fashion industry and the destructive ideal of unattainable perfection was deserving of a standing ovation, though it was probably unsurprising coming from the face behind the fictional feminist icon Hermione "My Hair Does What It Wants While I'm Studying and Saving Lives" Granger. Considering the critical eye Watson takes to Hollywood in general, it's equally unsurprising that she told Elle Australia that she doesn't date people who are famous.

Watson has been dating Oxford rugby player Matthew Janney for a couple of months now and what could have been a coincidence has been confirmed to be a personal pledge on Watson's part, though she admits that it has it's downside:"I don't think it's fair that, all of a sudden, intimate details of their personal life are public as a direct result of me."

When celebrities become celebrities, or are born celebrities, it's pretty much a given that they can kiss their privacy goodbye. A relationship is a difficult thing to make work past the honeymoon phase and that has to be twice as difficult for the rich and famous, who have to add the difficulty of finding someone whose affections for them aren't rooted in their public persona or access to their luxury lifestyles.

It seems like it would be easier to date another celebrity. No one else can relate to missing a birthday or an anniversary because you had a location shooting or racking up missed phone calls because you were trapped in back-to-back interviews or photoshoots and passed out as soon you made it home. Another celebrity knows not to believe everything that they read in the tabloids and can handle the pressure of the media scrutinizing their every word and every friendly lunch with a co-star.

You can go the Beyoncé and Jay Z way and make a documentary based on your personal life to open it up to the public on your own terms. You can go the Emma Stone and Andrew Garfield way and refuse to discuss it at all. Who can forget Stone's appearance on The Ellen Degeneres Show when her response to whether Ryan Gosling or Andrew Garfield was a better kisser was a fruit analogy?

However, the same things that make celebrity hookups work so well can also be the same things that drive them apart. Imagine how hard it would be to schedule a date around your press schedule and their press schedule. When you're both on location on opposite sides of the world, forget finding a good time to schedule a phone call. That could be the reason most celebrity relationships don't last. You can nitpick and worry enough over your own relationship without the media's help.

The solution of dating someone who's not a celebrity seems like it would be a lot easier once you got past the initial trust issues. They're a breath of fresh air from all the superficiality that you have to deal with every day and talking to them about classes or family can be a relief after a day when pictures of you wearing sweatpants to throw out the garbage landed you on the Worst Dressed List. You can even be relatively assured that they'll always have a free moment to answer your infrequent calls. If they can handle seeing their picture online after meeting you for lunch, then there's a good chance yours is a relationship that will stand the test of time, right?

Maybe not. It would be all too easy for fights to break out over words taken out of the context of the interviews you said them in, fights over being forced to hide your relationship, fights over not them being able to get a moment's peace once the relationship inevitably comes out.

There will always be that one birthday or anniversary that you missed when you shouldn't have and it's a lot harder for them to relate to your issues when wearing the wrong bag with your designer dress doesn't even sound like a real problem. Then again, Kevin Jonas has made it work with his now-wife Danielle Deleasa, a former hairdresser from New Jersey, and Tyler Posey and his middle school sweetheart turned fiancée, Seana Gorlick, have a wedding date set for the fall.

The course of true love isn't going to run smooth no matter whether you date someone famous or not. At least Emma Watson is keeping the dream of every fan with a celeb crush alive.

More like this
Selena Gomez Is Fine Being Single, But She Still Manifested Romance On 'SNL'
By Martha Sorren, Jake Viswanath and Jack Irvin
Tanya Burr Is Expecting A Baby With Her Mystery Partner
By Maxine Harrison
Bachelor Nation's Blake Horstmann Is Dating 'Love Is Blind' Star Giannina Gibelli
By Jake Viswanath and Radhika Menon
Why Sara Pascoe's Husband Is Familiar To Comedy Fans
By Alice Broster
Get Even More From Bustle — Sign Up For The Newsletter