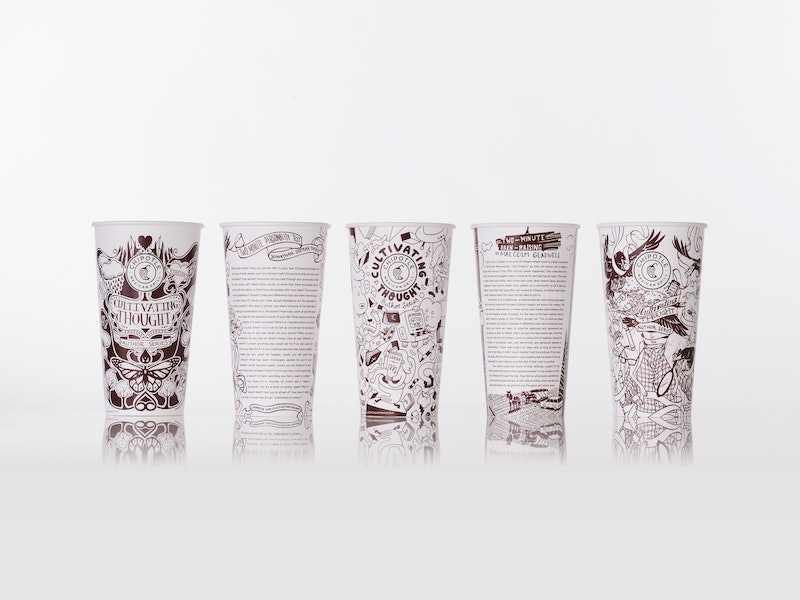 Just when you thought Chipotle couldn’t get any better, prepare to be impressed. Your trip to Tex Mex heaven is about to be even more satisfying because now your giant gourmet burrito will come with a side of free entertainment. And I’m not talking about the rush hour line-up of hangry customers with their overly complicated orders and overt lack of Chipotiquette. I’m talking about high-quality, Pulitzer-prize level entertainment.

Starting Thursday, the fast-casual burrito chain announced that its paper products will now feature original short stories written by Toni Morrison, George Saunders, Malcolm Gladwell, and other big names in the lit-o-sphere to give customers something thoughtful to read while they chow down on their guacamole-topped, bean-loaded burrito bowl. (Maybe this will make up for the upcoming price hikes Chipotle announced a few weeks ago...maybe.)

The project, called “Cultivating Thought,” is the brainchild of none other than Jonathan Safran Foer, who sprouted the idea one afternoon while munching on a burrito and experiencing a frustrating level of boredom. Apparently, he’d forgotten to bring a book or a magazine to accompany him on his lunch outing. So the best-selling author of Extremely Loud & Incredibly Close emailed Chipotle’s C.E.O. Steve Ells to express his frustration.

“I said, ‘I bet a shitload of people go into your restaurant every day, and I bet some of them have very similar experiences,” Foer told Vanity Fair, “and even if they didn’t have that negative experience, they could have a positive experience if they have access to some kind of text.’” Ells agreed and the two struck up a plan.

The novelist hand-selected the diverse mix of featured writers, which also includes comedian Sarah Silverman, director Judd Apatow, SNL favorite Bill Hadler, and author Michael Lewis, among others. Chipotle agreed to play zero role in the editorial process; minimal, if any, editing would be done by Foer. “I tried to put together a somewhat eclectic group, in terms of styles. I wanted some that were essayistic, some fiction, some things that were funny, and somewhat thought provoking,” Foer told Vanity Fair. The products will are also adorned with some impressive, line-drawn illustrations to complement each written excerpt, meant to be a brief, two-minute read.

"I liked the idea of a highly concentrated, intimate thought experiment. Something that could be pondered while eating alone, or discussed while eating with others," Foer says of his own featured story on the project's website. "The idea of expanding the space and time, of creating a small pocket of thoughtfulness right in the middle of the busy day, was inspiring to me," he added in a statement. And yes, I know what you’re thinking. Doesn’t it seem like a conflict of interest for the author of Eating Animals, a national best-selling book about vegetarianism and ethical eating, to team up with a mass food corporation that features a hefty amount of meat on it’s menu? Foer considered all of this, he assured Vanity Fair, noting that he has “no interest in marketing for anyone or endorsing anything.”

“That having been said, I got to know quite a bit about the company… in the process of Eating Animals,” Foer continued. “Chipotle was pointed to quite often, as a model of what scaling good practices might look like. The truth is, that’s not really why I did this.”

Foer is concentrating on the greater good of his project. “I mean, I wouldn’t have done it if it was for another company like a McDonald’s,” he told Vanity Fair, “but what interested me is 800,000 Americans of extremely diverse backgrounds having access to good writing.” Foer said he hopes that the prose on these paper products will provide thought-provoking reading material to those with limited access to libraries and bookstores.

I, for one, am impressed. Props to you Mr. Foer, and to you too, Chipotle. I know what I’m having for lunch today.