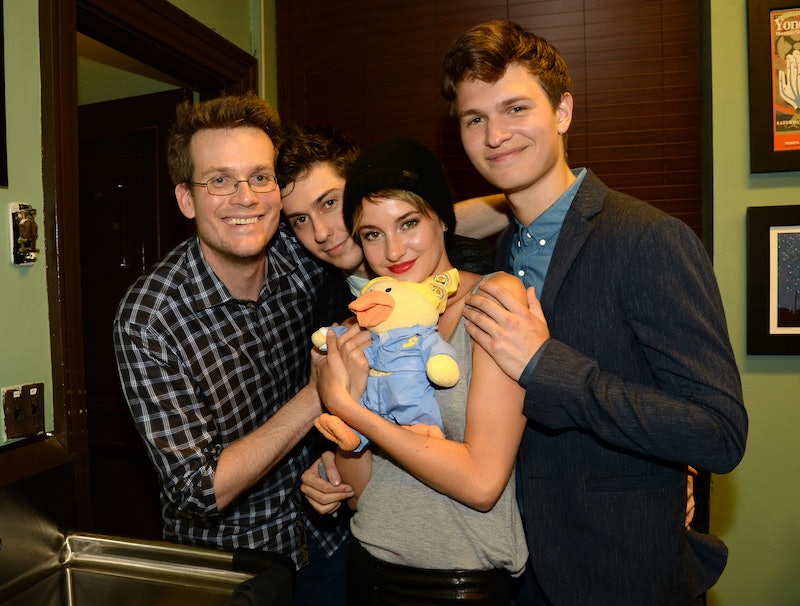 It comes as no surprise that authors can be hesitant to hand over their work for on-screen adaptations. Once the rights are sold, your story can be transformed, cut, mangled, and generally destroyed from the inside out. So when John Green wrote and released The Fault in Our Stars , he didn't even want to think about the possibility of a movie. After a screening of the film, Green spoke to a small crowd about his journey to adaptation.

"I didn't let anyone read the book before it came out, I didn't let Cassie send it out, when Cassie was like I want to send it to people after it comes out I was like 'They can buy it on the bookshelf like anyone else' I was very... trying to think of the right word... dickish. I was very dicksish." And while those who have read a John Green novel could never attribute the word "dickish" to the sensitive author, his hesitancy was due to the simple fact that he did not want his vision compromised.

"About two weeks after the book came out, my brother and I were [in Los Angeles] for a tour event and Wyck [Godfrey] came backstage and said, 'We're going to make a movie where the girl has tubes in her nose in almost every frame of the movie, and where the lead romantic male is an amputee, and it's going to be a movie about people but it will be a movie about people who aren't defined by their disability. They are going to be complex, rich characters and we think we can make a really faithful adaptation of your book.'"

As we know, Wyck Godfrey went on to produce the film, so why did Green agree to this particular producer? "They were just very convincing. And they went on to keep every promise, I mean insanely. Over-delivering. They gave me a much rich, more rewarding experience than I could have ever imagined."

And anyone who has followed Green on twitter, instagram, or YouTube, knows that the author took full advantage of being on set. Green describes exactly what he was able to accomplish, and how this experience was unique to an author having his book adapted.

"Getting to see the audition tape, getting to share my thoughts about them, getting to be on set during almost the entire movie, getting to make video blogs from the set of the movie, more of less unprecedented in the history of cinema, getting to Instagram — all of that stuff helped people get excited about the movie. It also helped me get excited about the movie. It helped me feel like I was part of it with [the fans]. It is precisely the opposite of previous experiences, which is why we're going to make Paper Towns with the exact same people because it was just such a great experience.

Paper Towns is the next Green novel that will find a home on the big screen, with Wyck producing. And from what Wyck had to say, the positive experience was amicable. He said of working with authors in general:

"We had a great experience with Stephanie Meyer on Twilight — who was a full producer on the films — and to have the person of whose brain it sprang forth sitting beside you, and you can look over, you don't even have to say anything, and you can tell when they're happy or not happy. Truthfully, we all loved the book so much, we didn't want to fuck it up. Having John with us the whole way helped us make sure we were getting it theamatically right and emotionally right."

After Wyck's kind words on stage, Green quipped: "I wanted to be the author who was all mad and like 'Oh, you're ruining my vision!' But they never did anything that upset me."

And from what we can divulge of the film, the audience wasn't upset with the film transformation, either. See The Fault in Our Stars in theatres June 6.