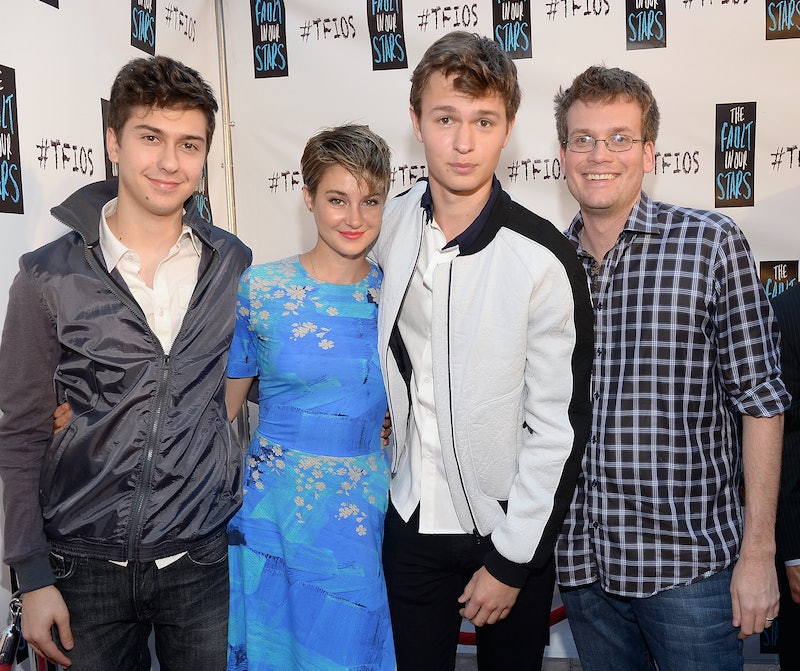 (Warning: Major spoilers within.) The Fault in Our Stars is already being heralded as the most sob-inducing film of the summer, and for good reason. For any fans who have read the John Green novel, it's clear that Hazel and Gus' journey to love will be anything but smooth sailing. And the film, just like the novel, promises many cry-worthy moments surrounding its young heroes. Bustle was lucky enough to catch an early screening of the film presented by BuzzFeed, and while it was hard enough to keep our own eyes dry, we can't imagine what it was like to actually film the dang thing.

Actors Shailene Woodley, Ansel Elgort, the film's author John Green, director Josh Boone and producer Wyck Godfrey answered questions after the screening, and each person spilled on their most emotional moments on set. Like we mentioned above, major spoilers below.

Shailene Woodley felt the most emotional during scenes filmed with her character Hazel's support group. "All of the people in the support group are cancer patients now, or are in remission... that was really emotional in such a beautiful way, we spent long days together, so it sort of felt like a family," she said. "It felt like we were there for a bigger reason than all of us, so that to me was incredibly emotional because it was so celebratory. It was a beautiful combination of art and real life and integrating real life into art."

Ansel Elgort, who portrays the overly confident amputee Augustus Waters, gave a different answer, citing his time filming a scene where he breaks down at a gas station when attempting to buy a pack of cigarettes. "The most emotional day actually in my life was the gas station," he confessed. "That day I was just very very emotional, just in general. I don't think I've ever been so emotional since I was very young. It was weird to have that amount of emotion as an adult, that was very weird."

Like the novel, the scene is compromised of Elgort sitting in a truck, sobbing helplessly about the state of his life. "I couldn't stop crying in between takes. Josh [Boone] would try to direct me and I'd be like, 'Leave me alone!'" Elgort said of filming the scene. "I couldn't hear a thing."

While that was undeniably his most emotional day on set, he divulged that watching the scene where Shailene wakes up to a very morbid phone call, was the hardest to watch. "The most emotional part was watching Shailene wake up, that was the best scene in the film, I think, acting and emotions it was like wow — she's a good actress."

And director Josh Boone agrees. "I remember crying when Shailene gets the call in bed when [spoilers spoilers]. There's the moment in the love scene when Ansel looks up at [Shailene] and he's really vulnerable about his leg, and I thought that was a beautiful moment."

For producer Wyck, the most touching moment of the film was one that resonated with him as a father. "Now watching the film, being a parent, the thing that gets me every time is the 'I'm not going to be a mother anymore' line."

The producer is referring to a scene in the book where Hazel's mother contemplates the state of her existence if her daughter were to die. All of the scenes above, plus many more, will likely elicit a waterfall of tears from viewers. But if you've seen the trailer, which is ranked the most "liked" movie trailer in YouTube history, you already know what's coming.

The Fault in Our Stars hits theatres June 6.