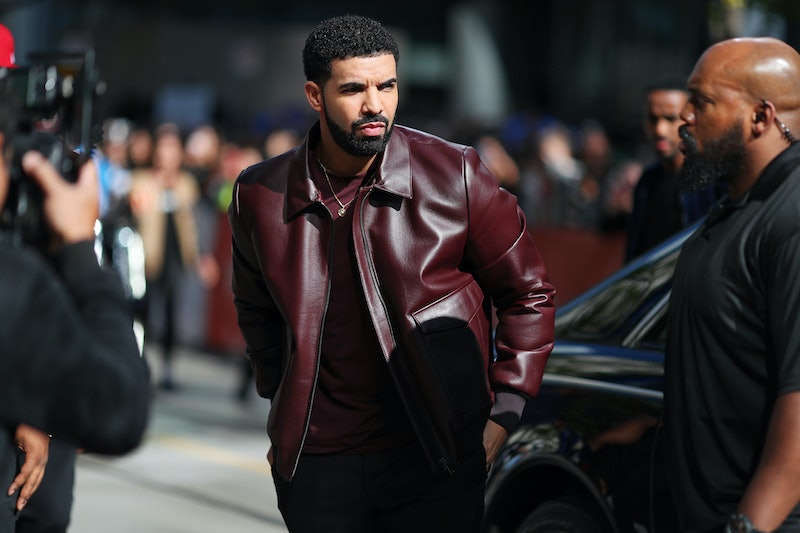 If you thought you were the ultimate Drake fan, get ready to be proven wrong. A digital agency known as Pilot Interactive has created a Drake biography website at startedfromthebottom.ca and it's pretty much the best thing you're going to see all day. Drake may have broken up with Rihanna — although I'm still hoping that rumor turns out to be false — but at least the rapper can rest assured that the Internet will never break up with him. Started from the Bottom chronicles major events in Drake's life from his birth all the way to the present day with amazing graphics and downloadable content, such as a free wallpaper. The only way this could get better if it were sanctioned by Drake himself.

However, even the most thorough website is going to miss a few things. Although it's easy to get distracted by the numerous baby pictures of Drake (and that gif of him dancing at his bar mitzvah), there are still a lot of important life events that didn't make it onto the site. It's a forgivable crime considering fitting 27 years worth of content onto a single website would be time-consuming to do as well as read. Besides, they were probably trying to include things that couldn't necessarily be found out just by cruising Drake's Wikipedia page.

Still, the fact that they neglected to add these important events to Drake's timeline is kind of a travesty.

Drake and Rihanna are currently off in their on-off relationship, but it all began back in 2009 not long after Rihanna split up with Chris Brown. The two were spotted out multiple times in 2009 at after parties and lounges, sending the rumor mill churning. They eventually broke up, but remained "romantic friends", whatever that means.

2010 - Drake had the biggest crush on Nicki Minaj.

And, boy, was he completely unsubtle about it. His 2010 track "Miss Me" even featured a shout out to Minaj that was basically a proposal. Actually, it was legitimately a proposal: "I love Nicki Minaj. I told her I'd admit it. I hope one day we get married just to say we fucking did it." Unfortunately, as Drake said in later interviews, Minaj only viewed him as a younger brother and they never got together.

In a documentary that premiered on MTV in 2010, Drake revealed that he writes his raps in a Blackberry instead of in a notebook or on a computer or even on a napkin with a borrowed pen. Clearly if you plan to get anywhere in life as a rapper, you need to glue your hand to your phone. Or, you know, have talent.

This comes as no surprise since Lil Wayne is Drake's mentor, but when Lil Wayne went to jail in 2010 and the Free Weezy campaign began, Drake went to visit him in prison. Several times, according to reports. Nothing says loyalty like supporting a man in jail for criminal possession of a weapon.

In 2012, Drake's entourage and Chris Brown's entourage got into a big fight at W.i.P. Reports said that Drake had made a derogatory comment about Rihanna to Brown, that there were some comments made about Brown's current girlfriend, and that bottles were thrown. They still haven't buried the hatchet.

Drake appeared in his first acting role since the end of his stint on Degrassi when he appeared as a voice actor in Ice Age 4: Continental Drift. His only other role since was a cameo in Anchorman 2: The Legend Continues in 2013, but, then again, when you're Drake, why would you need to pretend to be anybody else?

Although the website includes Drake's 2007 conflict with a rapper called Littles the General, it neglects to mention Drake's current feud with Jay Z. They mention the NBA playoffs game in which Drake busts out a lint roller for his trousers, but completely neglect to bring up Drake's commentary that Jay Z was somewhere eating a fondue plate. That's comedic gold, guys. Get with it.

More like this
Tristan Thompson Plays Drake’s Best Man In A Music Video Wedding With 23 Brides
By Grace Wehniainen
Drake’s Net Worth Will Have Critics Saying “Honestly, Nevermind”
By Hugh McIntyre
Olivia Rodrigo’s Song Dedication To 5 SCOTUS Justices Sent A Strong Message
By Grace Wehniainen
Will Beyoncé Be At The BET Awards To Perform “Break My Soul” Or Attend The Show?
By Jake Viswanath
Get Even More From Bustle — Sign Up For The Newsletter