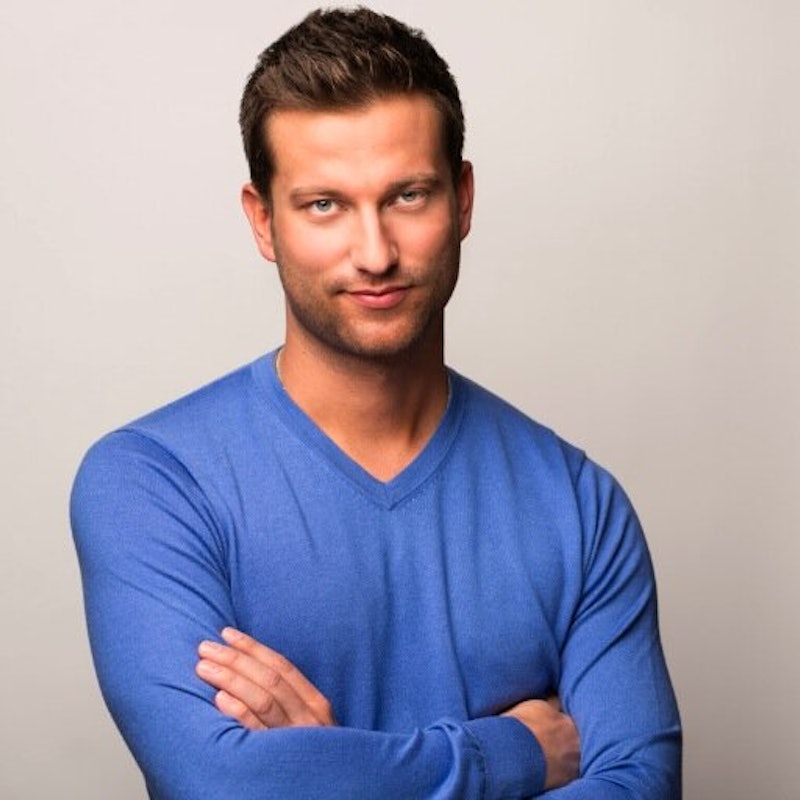 If you watched the premiere of Andi Dorfman's season of The Bachelorette , you may have found yourself asking, who the heck is that guy who camped out by the mansion for week in order to meet Andi? Well, you've come to the right place to have your dating show questions answered! The Bachelorette 's secret suitor is Chris Bukowski and he was on Emily Maynard's season of The Bachelorette. Chris' has made some changes since season 8 back in 2012 and while none of it explains why he would choose to come back on the show (my guess is willingness, money, and maybe even a genuine crush on Andi), it might interest you to see that this apparent weirdo isn't quite so weird.

Here are a few facts about the secret suitor, Chris Bukowski.

His first time on The Bachelorette was a Success

Well, comparatively. He didn't win the competition but he made it much farther than he did with Andi. As you saw on the premiere, Chris doesn't even make it into the first cocktail party on the show (Andi didn't think it would "be fair"), but during his first Bachelorette experience, he was a top contender. Chris made it all the way to the hometown dates before being kicked off.

He Owns A Bar

On The Bachelorette, Chris was listed as a Corporate Sales Director from Chicago, Ill. Now he lives in Arlington, Va. where he owns a popular sports bar called The Bracket Room.

He Was On Bachelor Pad

I definitely took a totally different approach. On Emily Maynard's season, I was there for love, was close to finding it, it didn't work out and I was heartbroken. A little of the way I acted on Bachelor Padwas because I was hurt by that. There was only one thing on my mind – the money. In real life, I'm not a mean guy, but I was presented the opportunity to win a lot of money so I'm going to do what it takes to win.

He Has A Dog Named After A Pop Star

See Chris isn't so bad, right? He's just your average dog loving bar owner who is absurdly okay with being on reality TV and making a fool of himself.

More like this
JoJo Fletcher & Jordan Rodgers Got Married In A “Playful & Fun” Wedding
By Grace Wehniainen
G Flip Shared How They Got Romantic With Chrishell Stause & Discussed Babies
By Brad Witter
Twitter Has Very Mixed Feelings About The New 'American Idol' Winner
By Jake Viswanath
Twitter Is Upset About The 'American Idol' Top 3 Results: "Who TF Is Voting?"
By Jake Viswanath
Get Even More From Bustle — Sign Up For The Newsletter