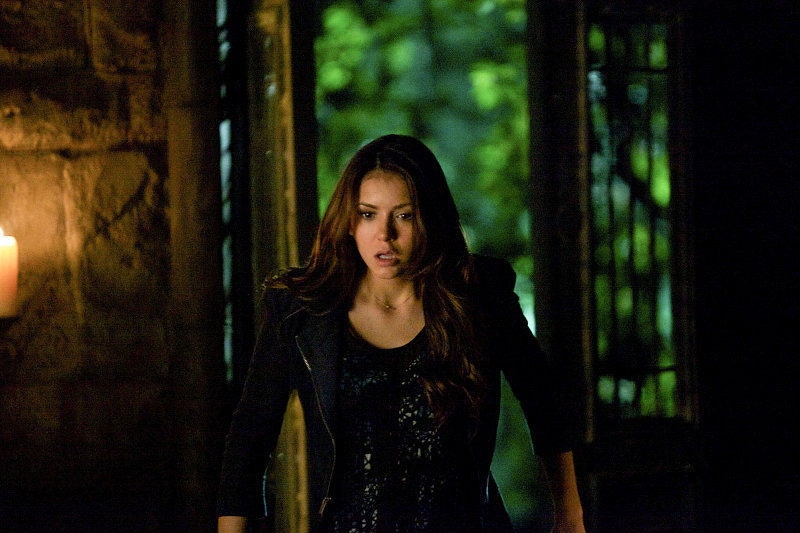 ALL. THE. FEELS. There was just no way to start a post about the Season 5 finale of The Vampire Diaries, "Home," without getting that off my chest. [SPOILER ALERT: Please, for the love all things holy, stop reading right now if you don't want the finale spoiled for you. Big spoilers ahead. World-shattering, heart-breaking, coming-in-like-Miley-Cyrus-on-a-wrecking-ball spoilers ahead.]

Let's start with all of the deaths. So many deaths in one hour of television. Here's everyone who died this week: Basically all of the Travelers, Luke, Tyler, Bonnie, Damon, Elena. Add that to Stefan last we and we have a tally of five major characters, one minor ambiguous/kind of good guy and a season's worth of villains. The episode also featured a lot of resurrections – we welcomed back Luke, Tyler, Stefan, Elena and ALARIC before the episode ended. For those of you doing the devastating math at home, your calculations are correct: That leaves Bonnie and Damon (DAMON) still on the Other Side. Oh, and then the Other Side crumbles into oblivion just as the episode ends. It's a hell of a cliffhanger.

We've already covered the Bonnie and Damon issue (okay, mostly the Bonnie issue – Damon clearly cannot really be gone), but what about the repercussions for those in the land of the living? Thursday's shocking finale means several shakeups in the romance department as well.

Delena: Will Their Love Be Resurrected?

Is this the end of Delena? If you believe Damon's death is permanent, it certainly seems so. But any good Vampire Diaries fan knows that death isn't exactly final in Mystic Falls (Alaric is back from the dead after two seasons in the grave). When Damon does return (because it seems like more of a "when" than an "if" situation), he and Elena might be in for a rare good period. They were follow-you-to-the-grave in love in the finale and Elena's ugly cry when she realizes that Damon is gone makes her "I'm going to throw up" face when she realizes Stefan is dead look pathetic.

Steroline: Is This Really Going to Be a Thing?

Maybe Julie Plec & Co. will make me eat my words, but I've never been a fan of the Stefan/Caroline pairing. I always saw her as his new Lexi – a platonic, uncomplicated confidant. But when Stefan is walking through the Other Side with actual Lexi, she's quick to quip about his death, meaning he'll never get that first date with Caroline, which I take as a surefire sign that Steroline action is on the horizon. Lexi always knows how to read Stefan. And then there's the way she comforts him after Damon's death. If you're into this pairing, rejoice, because I think the brush with death is the jolt they needed to act on the feelings that have been bubbling just beneath the surface. Of course, if Damon takes his sweet time coming back from the Other Side, this could run into some Stelena jealousy.

Jeremy and Bonnie: Do We Even Care?

I feel bad for not caring more about Bonnie, Jeremy, and their love. Jeremy only really grew on me before his first big death, which made that moment particularly devastating. Bonnie has died approximately 8,000 times and not a single one of them has affected me. I'm sad for Jeremy, but in a default kind of way, in the way I'm sad for anyone I hear has lost a loved one. I guess it's a nice break from ALL. THE. FEELS., but it just feels wrong not to care at all about such a major death. So RIP, Bonnie, but if you come back, please come back as a more interesting you.