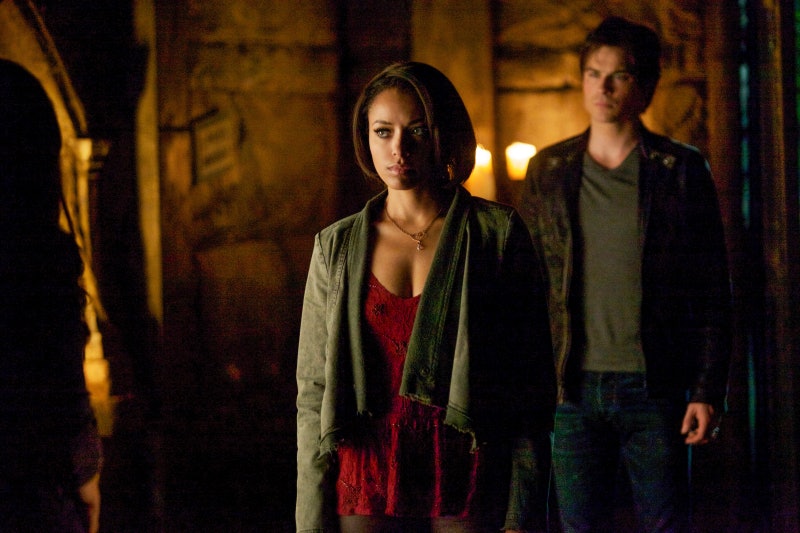 For the first time in forever (or ever, really) The Vampire Diaries may have actually killed Bonnie (Kat Graham). The witch who's died a thousand times, lived to tell the tale, and returned in various forms, including as a ghost and other nebulous supernatural states of being, may have finally died for real. Is she really leaving? It appears Kat Graham's TVD contract why she's hasn't left, so she's probably not gone for good. The problem is, Bonnie took Damon with her.

Now, we know we can't live without Damon Salvatore (and since Ian Somerhalder's got that six-season contract going, it seems unlikely that the CW would let all his cash money go to waste) so there has to be some way that he'll come back. After all, this is the first time he's really died. He's come close in the past, and of course human Damon had to die in order to become vampire Damon once upon a time in old Mystic Falls, but Damon's never really threatened to leave us all alone in the world with out his expressive eyebrows are sarcastic quips.

The Vampire Diaries has also never left us for long without Bonnie. But despite her killer haircut this season and the ways in which she has continually saved everyone's asses, is it weird that a world without Bonnie doesn't seem all that unlivable (you know, unless you're Jeremy Gilbert)?

Let's think about this:

To her credit, everyone is a little self-righteous on this show. Stefan gets his "Sigh, I just know better because I'm so evolved" voice going every once in while. Caroline's got her "Why can't anyone see things the way I see them" cheerleader chirps. Elena's got her "MY EMOTIONS" voice. And Damon's goes to that "You are all such emotional idiots" timbre. But Bonnie — oh, Bonnie — she's got the holier than thou voice down to an art.

Bonnie Seems To Think She's The Only One With Supernatural Problems

Girl. Everyone on this show is "alone." We get that you're the only one with witchy powers and a ghost grandma you don't listen to, but literally everyone on this show has a crazy situation. Hell, your BF Jeremy probably has brain damage from all the dying he's done over the seasons. Chill out, lady.

Even When Everyone Else Has a Moment of Levity, Bonnie's Never Amused

She's always worried. Always. Perhaps that's because Kat Graham knows she looks adorable with a furrowed brow, but come on girl, that's not good for your character.

Even Kat Graham Doesn't Want to Play Her

Graham told Hypable, "I knew, but I’m not emotionally attached to the outcome of the characters I’m assigned to play, the fans are ... If it was a personal choice, I’m sure I would have been gone a long time ago.” Damn. That's cold.

But I Guess She & Jeremy Are Pretty Fun To Watch

Hubba. Alright, maybe we should let her come back if Damon figures out a way to be a part of our world once more. But perhaps she should finally take her family's advice and lay off the magic. It seems to work (mostly, sort of) alright for Matt Donovan, doesn't it?