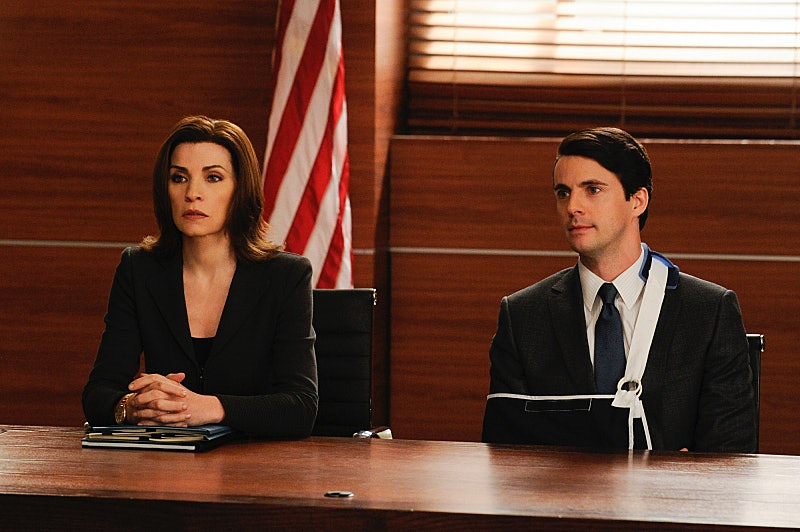 A storm is brewing this Sunday on CBS’s The Good Wife's Season 5 finale. With Alicia and Diane both struggling to keep their firms alive and successful, many changes are afoot. There is a very real chance that Cary may learn of Kalinda’s betrayal and Louis Canning’s scheme appears to be more complex than originally thought. Things don’t look any sunnier on the home front either; Peter seems to have re-developed a wandering eye after being rebuffed by Alicia, and both Peter and Alicia’s mothers are buzzing around to help plan Zach’s birthday.

Executive producer Robert King told TVLine that the outcome of the season finale would create a “bigger battlefield” with “bigger emotions” and “more serialized storytelling” in The Good Wife’s Season 6. He said:

We’re taking what we thought worked in Season 5 and seeing if we can make that stuff do something different in Season 6.

If you won’t be in front of a television screen on Sunday night and would like to maintain your status as a TGW aficionado, you’re going to need a few alternatives. We've gone through the trouble of locating some of your options for you. Watching it live is always best, but we’re sure Alicia and company will understand.

Earlier this year, CBS limited next-day access to full episodes to those who can verify their cable subscription. If you don’t fall into that group, you’ll have to wait a full eight days before watching the drama unfold. It’s the least ideal option unless you remain completely unplugged for the week and diligently avoid all mentions of The Good Wife on your social media accounts and favorite websites like Bustle.

The most commonly used alternative is Hulu.com. Unfortunately, it comes with a similar stipulation as CBS's online website — you have to have cable or a paid account to see the show in a timely manner. You can watch the show the next day if you have Hulu Plus, which costs $7.99 per month, or if you link your Hulu Basic account to your cable provider.

Apple, Google, Amazon are also options, and actually quite convenient if you want to be able to take the episode with you. Apple offers TGW episodes for $1.99 a pop, and the entire season for $44.99. Amazon Instant offers both standard and HD options for the series starting at $1.99 per episode. If you have a subscription to Prime, you’ll also find a number of older episodes available to stream for free.

ABC should have the episode loaded for select service providers the morning after the premiere On Demand. Sometimes the show will appear via your cable company’s online On Demand website as opposed to on the television however. Check now, so you aren't disappointed on Monday.