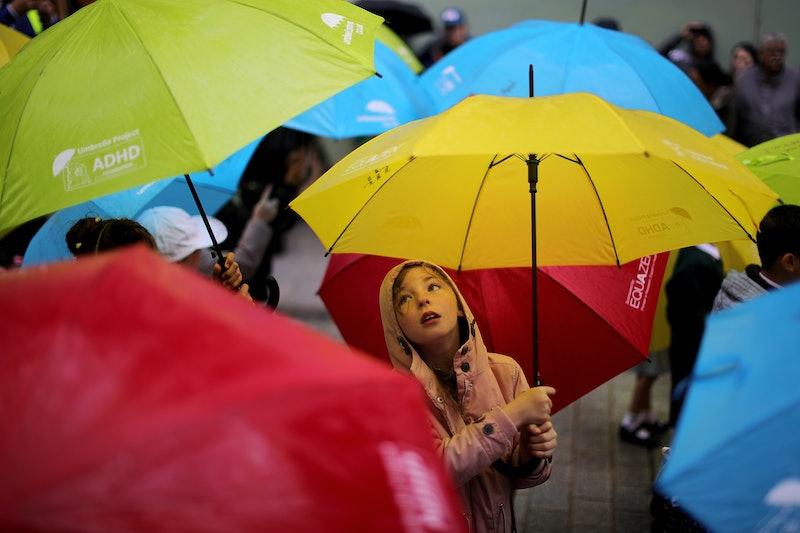 If you're one of the many Americans who take Ritalin or Concerta to improve focus or productivity, you might be interested in the new information that "smart drugs" could be messing up your brain. Step away from the pill bottle. Slowly. Theeeeeere you go.

Although the first "nootropic" (cognitive-enhancing) supplement, as well as the term itself, was invented in the 1960s, this now broad and readily-available class of substances didn't really take off in popularity until the past 10 years or so. With "knowledge work" on the rise, and school more competitive than ever, many Americans — myself included — are turning to these "smart drugs" (some over-the-counter, some prescription, and a few "grey market") to give them an edge. So it was disturbing to hear that new evidence shows that two cognitive enhancers, methylphenidate and modafinil, may work in the short term but affect developing brains poorly in the long-term.

Methylphenidate is sold as Ritalin or Concerta for ADHD, and modafinil (brand name "Provigil") is routinely used to treat narcolepsy and for other wakefulness-promoting purposes, like keeping fighter pilots alert. The specifics of brain chemistry are complicated, but both drugs basically work by boosting the available amounts of neurotransmitters in your system. In the short term, this means that you may have a better attention span or memory. But over time, having more of these substances in your brain appears to reduce plasticity and flexibility of functioning — ironically, potentially making you worse at learning and memory tasks than you would have been if you'd never taken the nootropics.

The research supporting these conclusions is admittedly somewhat speculative, as it relies on inferred similarities of drugs based on their chemical structure, as well as animal research. However, even tiny differences in chemical formulas can makes substances differ wildly in their effects, and animal studies are not always reliably applicable to humans. But if methylphenidate and modafinil are even somewhat likely to damage brains, especially in young adults who are still developing, then doctors should err more on the side of caution in providing them than they have so far. That means no gratuitous ADHD diagnoses just for a pharmaceutical exam-cramming boost, and no pumping young healthy people full of narcolepsy meds just so they can work absurdly long hours.

These particular findings only concern a small subset of nootropics, and they are prescription (at least in theory...). How about the safety of the rest? Well, even for the oldest, flagship nootropic, piracetam, evidence for safety and efficacy is in shorter supply than we might like. As for newer nootropics, like designer -racetams (aniracetam, pramiracetam, coluracetam, etc.), the state of high-quality evidence is even worse. Most supplement sites provide information about their cognitive-enhancing wares, but these are obviously to be regarded with some suspicion due to the commercial interests behind them.

If you're thinking of experimenting with nootropics, look for pharmaceutical-grade products and stick to recommended doses, because anything ingestible that goes to your brain should be taken seriously. Be sure to do your research, because most doctors won't be too helpful regarding nootropics, but there are potentially serious issues (for example, modafinil may interfere with hormonal contraceptives!) The subreddit for nootropics is also an interesting read, although proceed with caution: most of the participants are oddball lifehackers and not medical professionals.