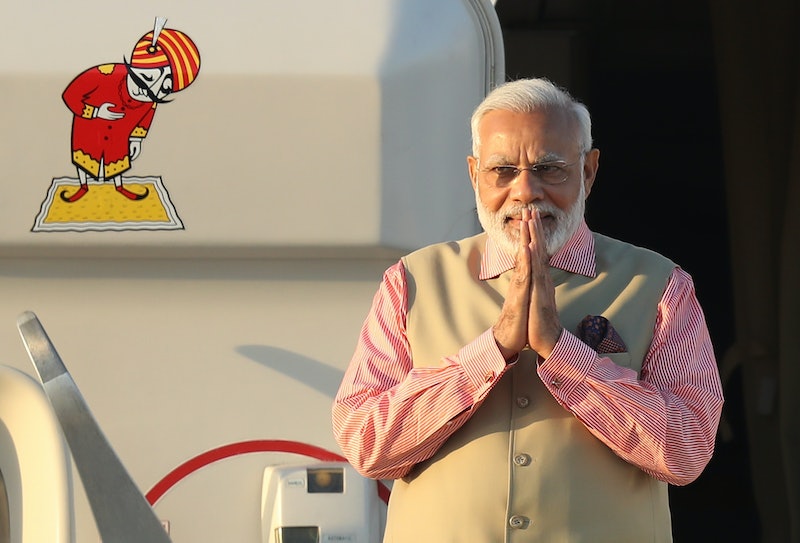 On Friday, Hindu nationalist Narendra Modi was elected the prime minister of India, the largest democracy in the world. 550 million votes were cast in a nation of 1.2 billion people, marking a sweeping victory for Modi and the Bharatiya Janata Party that knocked the Congress party out of its seat of power. In light of recent corruption scandals, a slowing economy, and other perceived governmental failures, the Congress party saw its worst election results since India's independence in 1947. And while Modi's victory may appear to herald change and progress, announcements of his leadership have met with polarized reactions.

Modi ran on a platform that emphasized economic reform, painting himself as a pro-business candidate. His administration is one that is believed to lead to "progressive, stable government," according to Surinder Singh Tiwana, a lawyer who voted for the BJP party. In a victory speech, Modi said to a cheering crowd, “We have the capacity to fulfill the common man’s aspirations.”

But there is considerable worry that "the common man" is not every man. India, the world's second largest population, represents an incredibly diverse group of people, with 180 million Muslims comprising the second largest religious group. But Modi, a devout Hindu, has already faced criticism for his handling of the 2002 riots in Gujarat where he served as the state leader. During the violence, over 1,000 people, mostly Muslims, were brutally killed, and Modi failed to intervene. His poor handling of the situation led to many countries instating visa bans on the leader, including the United States.

Moreover, the BJP has come under harsh criticism from LGBT activists from around the world for their continued anti-gay stance. In December, the Indian Supreme Court upheld a part of the penal code that criminalized gay sex. This shocked many Indian citizens, as the law had been ruled unconstitutional in 2009 by a lower court. The Congress party made clear their disappointment in the Court's decision, with President Sonia Gandhi releasing a statement in which she said, "I hope that Parliament will address this issue and uphold the constitutional guarantee of life and liberty to all citizens of India.”

But the BJP supported the ruling, with a spokesman stating, “we can’t bring Western culture into our society and culture,” according to local reports. Now that the election results have officially declared Modi the prime minister-elect of India, opinions are coming out in full force about what this will mean for India's future.

Obama and the Senate

The United States diplomatically congratulated Modi on his victory, with National Security Advisor Ben Rhodes tweeting his (and the White House's) formalities. The United States, however, has not always had the smoothest of relationships with Modi, having never formally lifted the ban on his visa application. However, according to Time, Modi will be granted an A1 visa (given to heads of states), when he officially assumes office.

India's competitor for largest population and fastest growing economy issued its congratulations, noting Chinese excitement for bringing "China-India strategic partnership to a new height." Foreign Ministry spokesperson Hua Chunying told reporters at a press conference, "This year is a year of China-India friendly exchanges and bilateral relations are faced with new development opportunities." With Modi's pro-trade and economically driven policies, it seems that China stands to benefit greatly from his administration.

The LGBT community and its allies have made no secret of their disappointment over BJP's disapproval of their sexuality. Hopefully, a younger generation of BJP will have more progressive views.

Not all reactions to Modi's victory have been positive, however, with many citing his fundamental and nationalistic nature as potentially dangerous for foreign relations as well as domestic policies. This particular article, however, applauded Modi's similarities to Putin, more or less suggesting that Modi's leadership style deserves to make some nervous.

This article, published long before election results were revealed, draws attention to the issue of sectarian violence in India. With Hindu-Muslim tensions never fully put to rest, Modi's continued failure to truly address the problem has not gone unnoticed. As The Economist notes,

...he should be judged on his record—which is that of a man who is still associated with sectarian hatred. There is nothing modern, honest or fair about that. India deserves better.

By some counts, many may find the answer to CNN's query to be a resounding "yes." Modi's righthand man and Home Minister for Gujarat, Amit Shah, left his position after multiple charges of corruption sullied his career. Yet, Shah was by Modi's side in campaigning for the new prime minister, making "inflammatory speeches where he talked of "revenge" for the riots in 2002 and telling voters to reject parties with Muslim candidates." As a result, Shah was banned from speaking at rallies, but his words and his actions still reflect poorly upon Modi.

All in all, the new leader of India has his work cut out for him. Gender violence, sectarian violence, and homophobia are only a handful of the social issues that continue to plague the nation, in addition to economic problems and government corruption. While Modi's reputation lends itself well to address a few of these issues, he will have to prove his mettle in helping India overcome its other obstacles, perhaps overcoming some of his own along the way.