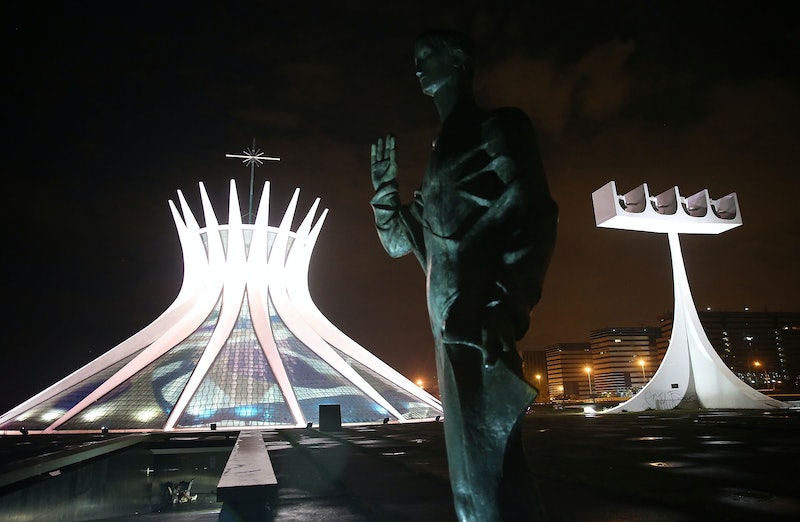 Does the future thrill or terrify you? How do you feel about high-speed trains, man-made islands, mile-high buildings, transparent government data, apps that scrutinize your use of cabs? Screw it: how do you feel about Soylent? Whether you’re a Luddite looking to confirm your fears about the future, or a tech-savvy forward-thinker looking where to move next, these futuristic cities are Earth’s best representations of what the coming decades might look and feel like.

In some locales, such as Dubai and Tokyo, the future looks awfully stunning, with architecture that wows. Other cities, such as data-transparent Helsinki, Finland, and ingeniously-planned Curitiba, Brazil offer subtler visions of the future.

In every case, these urban centers are addressing some of the biggest predicaments facing governments, urban planners, architects, and ordinary denizens today. How to accommodate booming populations, increase the efficiency and availability of transport, foster the growth of businesses, support technological innovation, and make the intricacies of government more transparent to citizens: these regions, from Hong Kong and Singapore to Silicon Valley and Toronto, are taking on these tasks and many more.

Look to our list of and then travel through time by visiting these cities to gain a first-hand glimpse of the future.

What makes it so futuristic? Its concept of city

The most visibly futuristic thing about Dubai is, of course, its outlandish architecture. There’s Burj Khalifa, the tallest building in the world, the city’s underwater hotel, and Palm Islands, a group of large man-made islands that resembling palm fronds, to name just a few.

Given this cityscape, it’s no wonder the metropolis has warranted comparisons to Simcity. But perhaps the more trenchantly progressive (and, to many, repugnant) thing about Dubai is its concept of what it means to be a city. The emirate has received loads of criticism for its citizenship restrictions — 95 percent of its residents are non-citizen workers or expats with limited rights.

What makes it so futuristic? Its architecture

Until 2006, schools in Hong Kong used fingerprinting technology to take attendance, but it’s really the city’s buildings that seal its fate as a vision of the urban future. Simply put, HK has more skyscrapers than any other city in the world. And some of them, including the Jockey Club Innovation Tower, are truly gravity-defying.

What makes it so futuristic? Business and industry

The southern end of the Bay Area — including the towns of San Jose, Palo Alto, and Menlo Park — is home to some of the biggest technology companies on the planet, Google and Facebook included. While the city itself lacks some of the the futuristic gloss of other locales on this list, there are few places on Earth where technology talent is more densely concentrated. New ideas, products, companies, and entire industries roll out of the region at the rate of car parts racing down a Ford-era assembly line. And the social goofiness and health food obsession is as pervasive as the new HBO show Silicon Valley would have you believe.

What makes it so futuristic? Eco-friendliness and smart city planning

Brazil’s eighth largest city may be known to many as the home of the 2014 FIFA World Cup, but the metropolis, which boasts a population of nearly two million, has also earned a reputation for eco-consciousness and ingenious planning. In 2010, Curitiba earned a Globe Award for sustainability, and UNESCO has also honored the city, citings its efficient transportation system as a model for developing regions.

What makes it so futuristic? Its plans for growth

The human population continues to skyrocket while the amount of livable space remains stagnant. Urban planners of the future will have to figure out how to foster greater population density and cut down on vehicular congestion, among other spatial inefficiencies, without diminishing quality of life. One city embarking on this project in a big way is Singapore. The small island city-state, already home to five million, aims to increase its population by 20 percent.

In order to do so, it’s partnering with MIT to develop innovative ways to streamline transportation. Some of its initiatives include increased vehicle prices (which discourage residents from adding more cars to the roads), flexible tolls prices (which divert traffic in real time to prevent jams), and a computer system that carefully analyzes cab use. The best part about Singapore’s project is that they they’re planning to export their findings to other cities, including Mumbai, Bangkok, and New York.

What makes it so futuristic? Data transparency

This snowy European capital is at the forefront of a growing municipal trend that involves cities making their statistical data available on Internet. What this means is that the slew of agendas, meetings, and decisions that cumulatively form the city’s government life — and provide a glimpse of its future — are transparent and visible to anyone who's interested. But perhaps even cooler is the city’s BlindSquare app, which helps blind people navigate the city. Among metropolises using tech to get citizens more involved in government and create a higher quality of life for residents, Helsinki stands out. Oh, and it’s also got city-wide free WiFi.

What makes it so futuristic? Its architecture (...and everything else)

Essentially everything about this city of 13 million people screams “future,” from its advanced railway system, its sci fi cuisine (one restaurant serves every dish with dirt), the abundance and originality of its shopping options, its seriously strange museums, its next-level haute couture, and its inventive (Time says MC Escher-like) apartment buildings. But perhaps it most futuristic element of Tokyo is its glittering skyline, the focus of which is its new Skytree tower. At 2,080 feet, it’s the tallest structure in Japan, the tallest tower in the world, and the second-tallest building, after Burj Khalifa in Dubai.

What makes it so futuristic? Its design

The capital of Brazil was built from scratch in the 1950s and thus has a cohesive, unified aesthetic vision. Basically, it looks like the set of sci-fi movie, but a remarkably well-planned one. UNESCO, which named Brasilia a World Heritage Site, calls it a “landmark in the history of town planning…. Urban planner Lucio Costa and architect Oscar Niemeyer intended that every element — from the layout of the residential and administrative districts (often compared to the shape of a bird in flight) to the symmetry of the buildings themselves — should be in harmony with the city’s overall design.” Even those who don’t appreciate the finer details of design will dig the city’s spacey, futuristic feel.

What makes it so futuristic? Its tech scene

Known as the “Silicon Valley” of India, Bangalore — a city that, 20 years ago, was practically unheard of — is today one of the fastest-growing city in the world and, according to Departures, the “fastest-growing wealth base in the Asia Pacific.” A hub of international wealth and tech talent, the city plays host to IBM and Accenture, in addition to other firms. And, to seal its fate as the tech epicenter of the East, its first direct flight to the United States connected with — where else? — San Francisco.

What makes it so futuristic? Its diversity

When, earlier this year, National Geographic published renderings of what coming generations of Americans will look like, the magazine tapped into a common hope for the future: that as people from different backgrounds congregate in cities and their cultures blend, prejudice — fortified as it is by traditional notions of appearance — will gradually erode. If diversity is a marker of the future, Toronto is definitely a futuristic city. Forty-nine percent of its residents were born outside of Canada, and UNESCO has named it the most diverse city in the world. To boot, the city boasts some seriously sleek architecture and a booming art scene: both factors that add to its forward-thinking appeal.