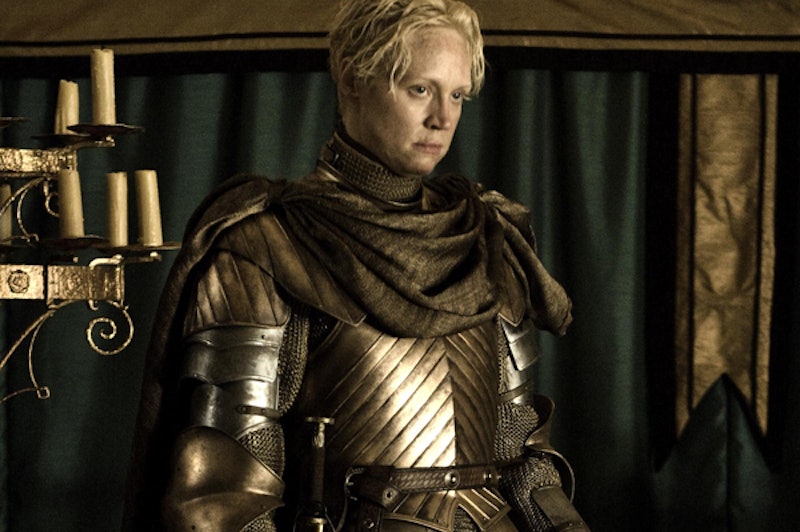 Oh, poor, poor Sansa. Sansa is always stuck in the worst situations on Game of Thrones , isn't she? She watched her father get beheaded, spent ages as Joffrey's little play thing, was forced to marry Tyrion (although I still don't think that's the worst thing that could have happened to her), lost almost everyone else in her family, and is now stuck with Littlefinger and her super creepy (and weirdly jealous) evil aunt in a super creepy castle. So yeah, things could be going better for her.

The good news is that the amazing Brienne of Tarth is on a mission to rescue her from all of her pain. And while we would usually say that it's pretty impossible to save Sansa from her miserable life, we all know that Brienne is the toughest knight that anyone's ever seen. Why? Because she actually cares about people and what happens to them. Oh, and because Brienne totally loves Jaime and would do anything to make him happy. (Anyone else want to see that odd yet perfect match happen?) Based on her speech to the memory of Catelyn Stark, Brienne is in it to win it:

Here's (possibly) the bad news: Brienne just found out from that plump boy at the makeshift pub that Arya is still alive. And why should that matter? Well, because Arya is just another speedbump in the save-sansa-from-her-life plan. So for those of us who can't wait to find out if Sansa gets rescued, to the books we go!

Ugh, George R. R. Martin. Apparently Sansa has yet to be saved. Why? Because Martin hasn't written that part yet. According to the books, Brienne does a whole heck of a lot of fighting on her way to save Sansa, but she hits way too many roadblocks. Yeah, she's got Tyrion's trusty steed, Podrick, with her to help, but it doesn't look like they've made much of a dent in their mission. I guess the good news is that [spoiler], after Sunday's episode, Sansa doesn't have to deal with her horrid Aunt Lysa anymore since Littlefinger totally "made her fly." (I have a feeling that her son isn't going to like that very much.)

In the end, though, we all know that Sansa will never be happy because she is a magnet for misery. Drink up, Sansa. You're going to need all the liquid courage you can gather.