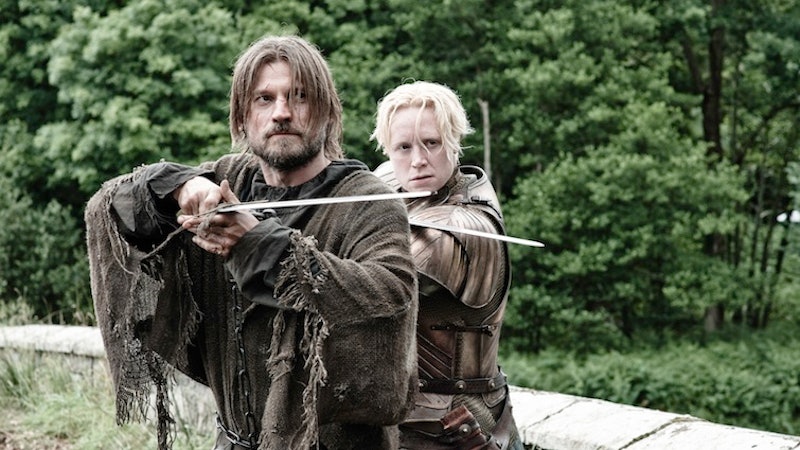 There has been a lot of talk about the twisted relationships on Game of Thrones from the uncomfortable incest-turned-rape between Jaime and Cersei Lannister, to the creepy seduction of Tommen by Margarey Tyrell, who is years older than the new child king. I won't even get into the molestation vibe Littlefinger has given off to Sansa throughout the series, especially now that she's in his care. But the one realtionship is most interesting and actually kind of sweet has been the love blooming in Brienne of Tarth towards Jaime Lannister.

Last season, we saw the two on a difficult journey to King's Landing together. They began with Jaime being prisoner to Brienne while she escorted the Kingslayer to his home and his sister-lover. But soon they came to have mutual respect for one another, particularly after saving each other's lives multiple times throughout the journey. They took baths together (platonically), they talked for hours, she comforted him after he lost his sword hand, and even convinced him to continue on living. So it's no surprise that Brienne would fall for Jaime after seeing both his brave and vulnerable sides. She would be the type of woman who would want both a strong man and someone she could take care of and be strong for from time to time.

After the pair successfully returned to King's Landing with their lives, minus one appendage, it seemed to be creepy business as usual when Jaime immediately tried to get some much-desired lovin' from his sister-lover, only to be denied. King's Landing newbie had to watch in the corner as her new love interest only had eyes for his sibling. Finally Jaime acknowledged Brienne and gave her a new quest, to find Sansa Stark at the request of Tyrion and against the direct demand of his Cersei. With the quest, Jaime entrusted Brienne with his most prized and newest possession, his sword made of Valyrian steel. And he tacked on one of Tyrion's most prized companions, Podrick Payne, to accompany her.

I'm still having a tough time trying to contain my anger and disappointment at Jaime after that Lannister sibling rape scene— from the looks of last week's episode, Cersei hasn't forgiven him either— so seeing Jaime in this new heroic light is quite difficult. That is, until I realize that no one, including Brienne (but excluding the viewers) has seen Jaime return to his dark side.

Spoiler Alert if you're allergic to looking ahead in the books: In George R.R. Martin's works, this moment is the last time Brienne and Jaime see each other, for now. Brienne goes on to have some pretty crazy adventures with Podrick by her side while Jaime has to deal with the crazy aftermath of Tyrion's trial. For now, it seems as though the could-have-been lovers will continue to be just that: "could have been." That is unless Game of Thrones decides to depart even further from its source material.

Distance might be a good thing for Brienne and Jaime as The Kingslayer has a very long way to go before he can earn forgiveness for his misdeeds and before he's good enough for someone as noble as Brienne. She will, however, travel and face some dangerous situations with Podrick and we all know how heroic he is when things get, ahem, romantic. Perhaps Podrick could shift Brienne's attention for a while. Wink, wink.