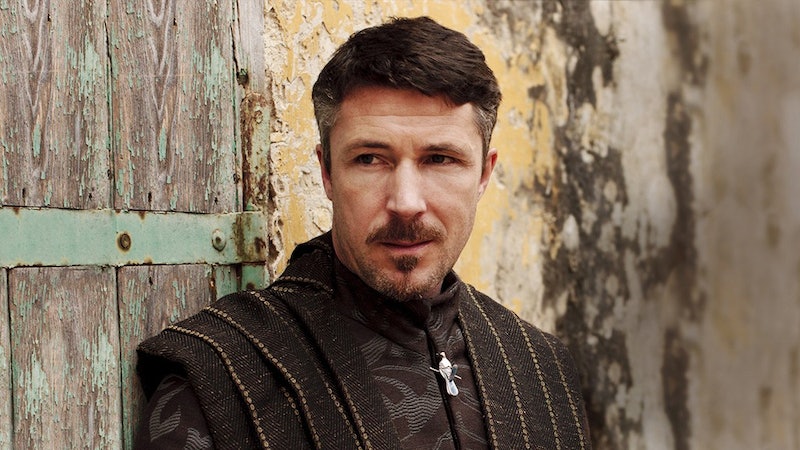 "Call me Petyr." The cringe heard 'round the world! In Game of Thrones' Episode 7, "Mockingbird," we saw Littlefinger put the moves on Sansa for the love of Catelyn Stark. Nothing about this felt okay at all. In fact, let's talk about that for a bit because that's the shot heard round the Eyrie that lead to Lysa's journey our the moon door, and it also means we've got to step backwards a bit. We thought Littlefinger was doing everything for Lysa, but then he killed her with a simple shove.

Littlefinger approached Sansa and told her that he loved her mother, the late Catelyn Stark, more than anything. It was odd, awkward, and weird, but it made us realize that he was hanging out in the Eyrie for reasons that did not have to do with making Lysa moan so loudly. When Sansa inquired why Littlefinger killed Joffrey, it was for Catelyn. You do nutty things (like kill) for those you love. Ah, Westeros. Game of Thrones needs a remix of "What I Did For Love" from A Chorus Line pronto.

And then — because Sansa's hair is red and radiant like Catelyn's, only she's younger and apparently, even more beautiful — Littlefinger planted a kiss on poor Sansa, who seriously, cannot catch a break. Lysa saw all of this, and the jealous woman that she was, wanted to put an end to Sansa's life out that moon door. Memo to Robin: No, not every town needs a moon door, but we sure see why the Eyrie does.

We see Lysa at her most vulnerable — which might be her ugliest — when Littlefinger walks in. She lied and killed for him. She did so much for him. Why? Because she loved him. Lysa loved Littlefinger so much that she poisoned her husband, setting off the series of events for the entire show, when all he was doing was trying to get closer to Catelyn Stark. Of course her world was shattered. I am by no means in Camp Lysa, and she's the poster child for the deadly sin of envy, but all that she sacrificed for love is, to be frank, no different from anything Littlefinger has done. Littlefinger has committed regicide apparently because he loved Catelyn Stark (as far as we know — who the hell knows what we'll learn next week about his motivations). Lysa killed her husband because she loved Litlefinger. She gets thrown out the moon door. Littlefinger gets to walk around so cocksure while taunting other people.

While I certainly won't miss Lysa, it's hard to dismiss how both male and female characters do the same thing in Game of Thrones, but women get hit harder. Everyone does murderous, horrible things, thinking they're avenging someone he or she loved (see: Oberyn revealed that Cersei is so reproachful of Tyrion because she believes he killed her mother), but men continue to rise up, and women get, well, shoved out of doors. Littlefinger gets to stay calm, Lysa gets to roar with jealousy. But, to paraphrase what Sansa said to Robin, women don't get to shove men out of doors, do they? At least someone's cognizant of the situation in Westeros.

While that's just one point to talk about in regards to Lysa's manic descent into whatever's out that fatal door, we've got to wonder what will happen to Sansa now. As stunning and glamorous in a cape as she is, she's only a teenager, and there isn't free therapy in Westeros. Now she's left alone in the Eyrie with Littlefinger — who seems like he wants to have his way with her as a means of recreating his missed opportunity with Catelyn, which makes me want to take a shower. Game of Thrones doesn't need another rape scene, and Sansa has already been through way too much, but Lysa's death does make me concerned for her.

However! We have The Hound and Arya headed in that direction. Might they get there in time to give Sansa a happy ending, or does Game of Thrones hate teenage girls that much? We'll have to wait two — UGH! — two more weeks until we actually find out.