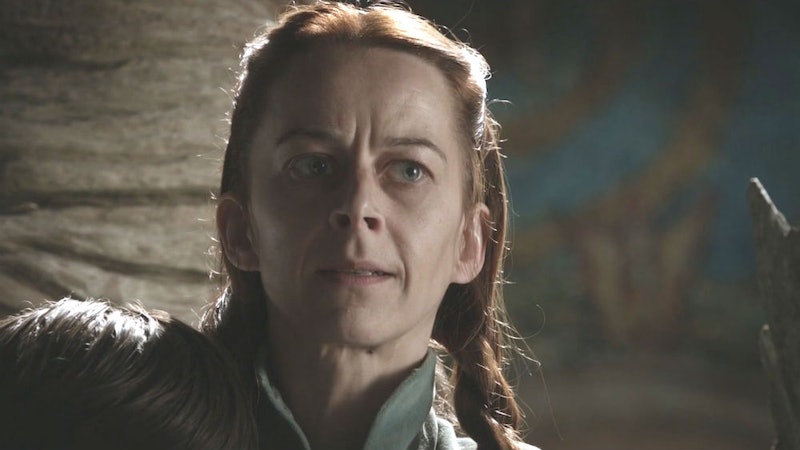 It's hard to remember all of the storylines that Lysa Arryn is a part of in Game of Thrones , but that's probably because none of them are as memorable as the fact that she still breastfeeds her way-too-old son. So for those of us who may have forgotten about her political antics that took place all the way back in Season 1 (because I definitely did), she totally locked Tyrion up in jail and put him on trial for the murder of her husband Jon Arryn. The thing is, in Sunday's episode of GoT, Lysa admitted that she poisoned Jon with the help of her new hubby, Lord Baelish.

Of course we all knew that Tyrion didn't murder Jon (or attempt to kill Bran), but her admittance makes the mental torture she put Tyrion through that much more sick. Anyone else remember when she threatened to throw Tyrion down a hole in the castle's floor if he was proven guilty? (You might better recall her son Robin saying, "Mummy, I want to see the bad man fly.")

Considering what she almost did to Tyrion and how she coddles her son way too much, it makes you just a tad scared for what else she has up her sleeve the rest of this season. Because after seeing Lysa passive aggressively insult her sister, the late Catelyn Stark, in front of Sansa, and then almost break Sansa's fingers when she became so jealous at just the thought of Lord Baelish and Sansa having sex, we can pretty much guess that Sansa isn't going to do so well with auntie dearest. It's pretty much fair to say that Lysa has some serious younger sister issues and she's going to take them all out on Catelyn's surrogate: Sansa.

All I can say is that Sansa better figure out how to get herself out of this mess because being set up to marry Robin is not that much better than being surrounded by the Lannisters.