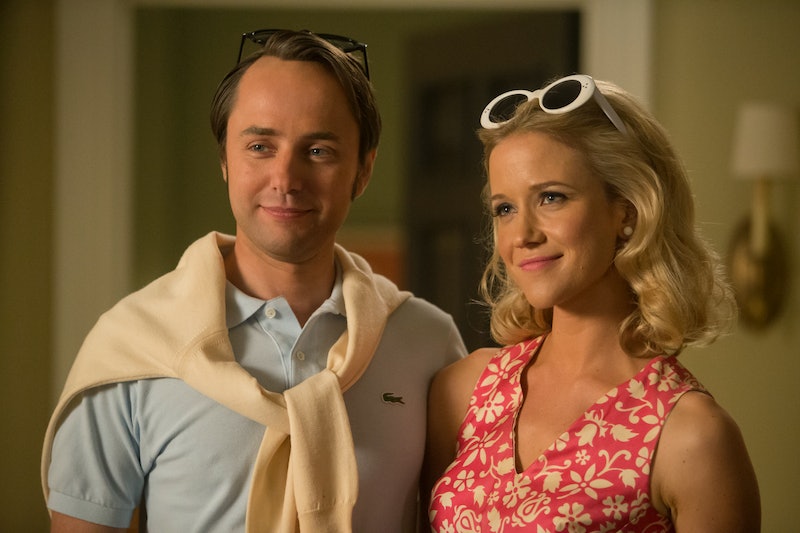 Great. This is just what we need: Another pop culture "cool girl." We were all smiles when Pete Campbell's girlfriend was all business (no, literally business — this is not a sexual euphemism), but this week, Pete's gal went full cool girl when she grabbed Pete by the balls (also literally) and instructed him to meet her in the airplane bathroom "in 60 seconds." Sure, we love seeing a sexually adventurous woman who knows what she wants, is fiercely dedicated to her job, and pushes Pete Campbell around, but there was something that just felt disingenuous about the airplane scene. Bonnie (Jessy Schram) doesn't appear to be taking charge in the scene, she appears to be playing the cool girl card. And that's not cool.

As Buzzfeed's Anne Helen Petersen pointed out in her profile of Jennifer Lawrence, the "cool girl" has consumed our culture. She cites a quote from Gone Girl, in which author Gillian Flynn explains the phenomenon quite perfectly:

She’s a cool girl. Being the Cool Girl means I am a hot, brilliant, funny woman who adores football, poker, dirty jokes, and burping, who plays video games, drinks cheap beer, loves threesomes and anal sex, and jams hot dogs and hamburgers into her mouth like she’s hosting the world’s biggest culinary gang bang while somehow maintaining a size 2, because Cool Girls are above all hot. Hot and understanding. Cool Girls never get angry; they only smile in a chagrined, loving manner and let their men do whatever they want. Go ahead, shit on me, I don’t mind, I’m the Cool Girl.

If that doesn't work, Amy Schumer's "A Chick Who Can Hang" sketch does the trick pretty well too.

While we'd like to believe Mad Men's Bonnie isn't playing the cool girl card, the essence is there: She's the unattainable ideal for a '60s ad man. She's available 24/7, she's seemingly independent, but it all benefits Pete. She gets caught having sex with Pete in the SC&P Los Angeles office and rather than becoming scandalized (as Pete's ex Trudy definitely would have been), Bonnie giggles along with Pete. She's just that cool. She doesn't care; she's a cool girl.

Look, I'm all for a woman who does what she wants — including initiating her man into the mile high club on a cross-country flight — but when a woman's "coolness" is just a matter of her ability to make her man happy (take note of how quickly Pete's brow furrows when she's suddenly uncool and annoyed with "New York Pete") it doesn't exactly feel like a victory.