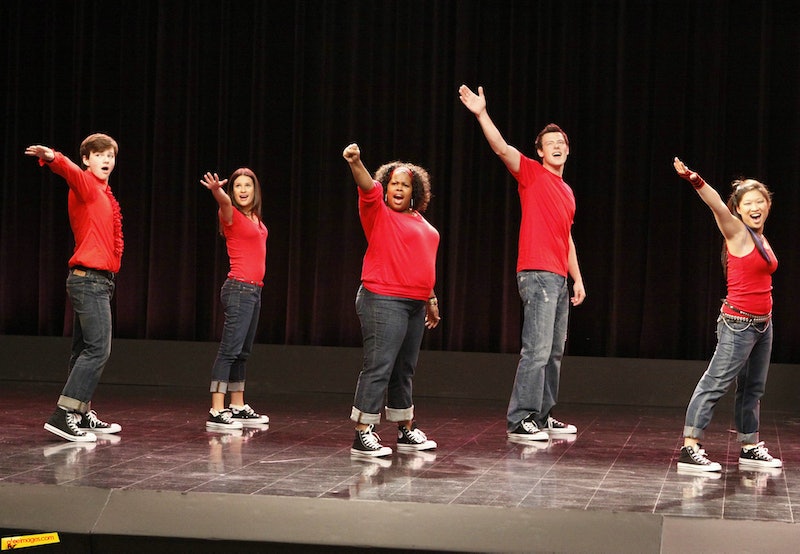 Hold on to that feeling. How many times has Journey's "Don't Stop Believin'" been performed on FOX? One time too many, if you ask most fans — but, in fact, Glee 's performed "Don't Stop Believin'" six times since it premiered in 2009. So which one of these many moments is the best? I know, you're probably so sick of "Don't Stop Believin'" by now. But, with Glee's fifth anniversary coming up, there's no better time to remember the song that started it all. Each and every time it's been used to remind us of Glee's original magic.

At this point, you probably cringe at the opening notes of this song. And who could blame you? Between it's unfortunate part in The Sopranos finale, it's millenial resurgence with Stephen Colletti and Lauren Conrad on Laguna Beach, and that fateful day in 2009 when the Glee pilot aired, "Don't Stop Believin'" became the most over-played song in our lives. But, as much as we can't stand to hear it one more time (on the radio and on Glee), we can never forget that very first New Directions performance. Baby-faced Rachel Berry and Finn Hudson won us, and Will Schuester, over with that first taste of Glee — so is that the crowning achievement of the Glee club?

Now, of the six times the song has been performed, one of those times was actually not by the New Directions — the Haverbrook School for the Deaf performed the song during Season 1's "Sectionals". When Sue Syvelster plotted against the glee club and leaked their setlist to the competition. So, excluding that rendition, here's our definitive ranking of the New Directions' "Don't Stop Believin'" performances of the past five years.

You probably forgot about this one. Because, well, no one duets this song better than Rachel Berry and Finn Hudson. But anyway, during Season 1's fifth episode, "The Rhodes Not Taken," Quinn and then-boyfriend Finn attempted a duet when Rachel quit the glee club to star in a school play. I love Quinn — but this song just isn't for her and for that.

There was so much to love about this performance — even if it didn't win the competition. It was the New Directions first (well-prepared) performance at Regionals and it made us fall in love all over again with Rachel, Finn and the rest of the glee club. Featured during Season 1 finale, "Journey," the classic hit brought the show full circle — ending literally on the same note as the debut, hit season began.

God, the feels. The Season 5 episode, "New Directions," marked the true end of an era. The glee club we knew and grew to love and then hate and then love again came to an end and the original cast returned to say their finale goodbyes to Mr. Schue, the auditorium, and their lost leader, Finn Hudson. Again, "Don't Stop Believin'" marked a new beginning and an end, just like it did during the show's first season. And, well, the feels.

This was the first time we actually got a very different version of this song. During the Season 4 episode, "Sweet Dreams," Rachel gave an emotional performance of the song for her audition for Funny Girl. And again, we got a lot of feels because this song gives Rachel a lot of feels. Hence her choosing it to win over the producers and director of the show. And she nailed it — it wasn't "Don't Rain On My Parade," but it was one of Rachel's finer moments. It's also always nice when we see her subconsciously appreciate her friends that got her where she is since it's so rare nowadays.

Nothing beats the first time. Right, people? You might not have liked Glee right off the bat, but this performance made you fall in love. Even now that's it's been used so many times, this performance set the stage for everything series is about. And here we are fondly remembering the moment we all got sucked into Ryan Murphy's high school musical dramedy and — insert "Don't Stop Believin'" pun — we're still holding onto that feeling five seasons later.