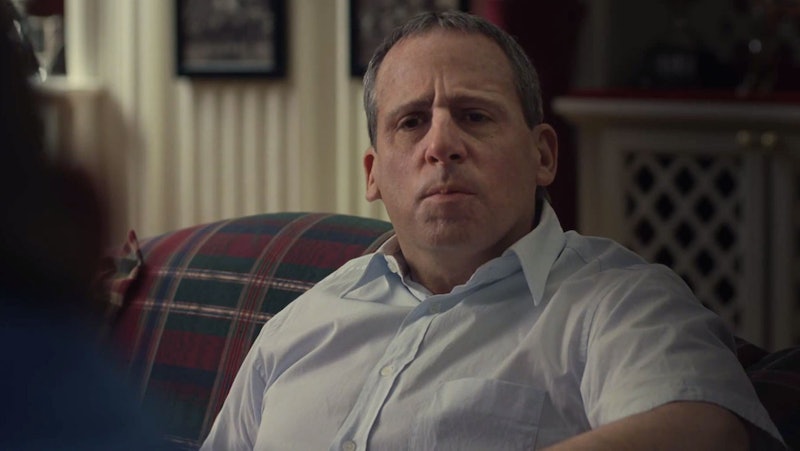 It's easy to focus on Steve Carell's changed appearance when hearing about Foxcatcher , a sports drama due in December, but don't overlook the actor's performance; according to critics who saw the film premiere this week at Cannes, Carell's portrayal of a schizophrenic multimillionaire is nothing less than Oscar-worthy. Although most reviews won't come out for months, early takes have his labeled his performance as "career-changing," "mesmerizing," a "revelation" — basically, every form of praise an actor can get, Carell receives. The film's other stars, Channing Tatum and Mark Ruffalo, are also apparently fantastic, but, at least judging by these early reviews, Foxcatcher is Carell's movie, one hundred percent.

While no one who's ever seen an episode of The Office doubts that Carell is a comedy genius, it's harder to imagine him as the Oscar-worthy drama star that all those Foxcatcher critics say he's become. The actor shines in lighthearted, improv-heavy roles, and while we're excited to think that he's capable of more, it's going to take some time before we fully come to terms with Steve Carell, dramatic leading man. To prepare ourselves, here are six times Carell proved that fighting Rainn Wilson and saying "that's what she said" weren't the only acting skills he had up his sleeve:

Next to Abigail Breslin's Oscar-nominated performance and Paul Dano's breakthrough role, Carell's turn as a gay, depressed man recovering from a suicide attempt didn't receive much notice. That's a shame, because as Frank, Carell was hugely affecting, sad and vulnerable and very, very real. His scenes with Dwayne (Dano), a Nietzsche-loving teen equally pissed off at the world, were particularly powerful.

2. Being Dumped by Holly in The Office

Carell won raves (but never an Emmy, shockingly) for his hilarious performance as the incompetent yet lovable Dunder Mifflin manager, but the role had its share of darker moments, too. When Michael Scott was dumped by the love of his life, for instance, it was a rare occurrence where Office fans saw the character with all pretensions down. Sure, Darrell's awkward, panicked phone call gives the scene levity, but Michael's heartbreak over losing Holly is the central focus.

3. Every Scene in Dan in Real Life

The 2007 film is called a dramedy, but it featured what's arguably Carell's most depressing role to date. He played Dan, a widower who falls in love with a woman, only to find out that she's dating his brother. The movie received mixed reviews, but nearly all critics agreed that Carell's intimate, moving performance was a definite highlight.

4. Reconnecting with His Ex-Wife in Crazy, Stupid, Love

There were so many great performances in Crazy, Stupid, Love that it's hard to narrow down the best, but Carell's turn as Cal, a cuckolded father, might just make the top of the list. He played the sad-sack character with a perfect combination of depression and hope, making audiences root for his success and hate anyone named David Lindhagen. Carell's best scene is when he coaxes his ex-wife (Julianne Moore) through a pretend problem, but unfortunately, the only available video online is in Spanish. Make do with his discovery that his life coach is dating his daughter, instead.

Coming to terms with Earth's impending destruction is heavy stuff, but in this 2012 dramedy, Carell handled it with a perfect mix of fear, detachment, worry and understanding. The final scene from the film, where Dodge (Carell) reunites with his love (Keira Knightley), is his best, but beware of spoilers.

6. That Final, Wordless Airport Scene in The Office

All of Michael Scott's farewell from The Office was wonderfully done, but his last scene, when he says a wordless, emotional goodbye to one of his favorite employees, hit particularly hard. Even with no dialogue, Carell (and Jenna Fischer, who shined in this scene) managed to make even the smallest of moments enormously affecting. It was a fitting, poignant end for a guy who'd always just wanted to be loved.