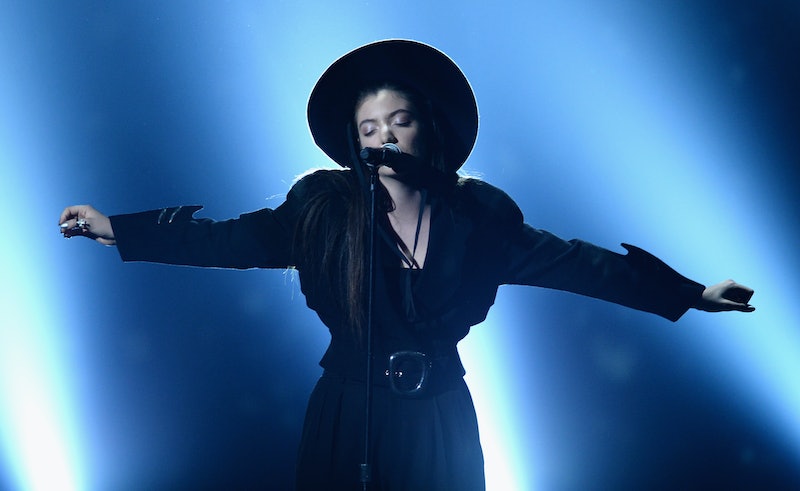 Moody Miss Lorde has fallen off my radar lately, but she burst back onto the scene last night for the Billboard Music Awards in a dress that was, for all intents and purposes, inspired by an eagle. Touché, white-teethed teen. Glad to see you're still dressing up like no one else.

Lorde may only be 17 — as everybody can't help mentioning ad nauseum but she's a fashion force in her own right, as fresh and brooding and wild-haired as she is parody-able. I mean, the girl loves her dark lipstick and witchy dresses. And as much as we might want to believe that she's just like us, she's already far more fashionable: she collaborated on an amazing goth-purple lipstick for her MAC collaboration, she dip-dyed her fingers like it was no big deal at the 2014 Grammys, and she Instagrams herself trying on Comme des Garçons. Maybe she used to shop at Hot Topic, back when she was just your average undiscovered international superstar, but I'm guessing those days are over.

Lorde is cool, nobody's denying that. But where exactly does this wunderkind find her fashion inspiration? I scrutinized Lorde's concert outfits and went over her Instagram account with a fine-toothed comb, and I'm happy to report that I've discovered exactly where and how Lorde gets her sartorial ideas. Warning: the results may shock you.

2. A Southern tent revival preacher circa 1920

In early-1900s America, tent revival preachers were hugely popular in the South, and were famous for their extreme hand gestures, apocalyptic denouncements of modern culture, and wide-brimmed hats. Ring a bell?

Alexander McQueen's Autumn/Winter 2006 show concluded with a hologram of Kate Moss materializing from a puff of white smoke. It was weird, otherworldly, and kind of made us believe in ghosts — just like Lorde's onstage presence.

It's only weird when a singer doesn't have an MJ phase.

5. The witches from Macbeth

Double, double, toil and trouble. A trio of witches freaked out Macbeth, and I'm pretty sure Lorde has borrowed hand movements from every single one of them.

Ready to perch on your shoulder and whisper dark things into your ear forever and ever.

I KNOW, I KNOW, I DIDN'T SEE THAT ONE COMING EITHER.

9. The kids who were way cooler than you in high school and still totally nice but it never mattered because they were just that much cooler than you

Even today, you still really want to be friends with them...but you'll never have the right sunglasses.

More like this
The Most Extra Party Girl Beauty Looks From The Early 2000s
By Paris Giles
All The Early 2000s Hairstyles Rihanna Wore In A$AP Rocky's "D.M.B." Video
By Olivia Rose Ferreiro
Cameron Diaz Just Recreated *That* Iconic 'There’s Something About Mary' Scene
By Rachel Mantock
5 Mini Skirt Outfits To Wear, Inspired By These Brave Souls
By Avery Matera
Get Even More From Bustle — Sign Up For The Newsletter