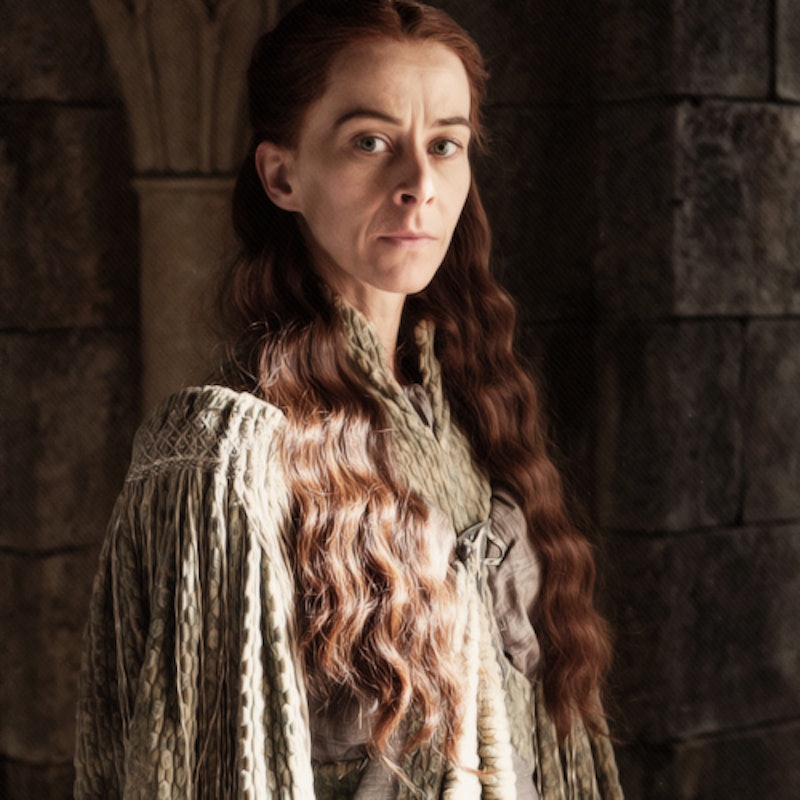 When Lysa Tully (SPOILER ALERT) was killed in last night's episode, it was a pretty big shock, but not half as shocking as what that character's done herself. I mean, just moments before she was holding her own niece over her throne room's "moon door", AKA the giant hole in her floor meant entirely for the purpose of tossing people the preteen son she still breastfeeds doesn't like. I know, right?!?

There are a lot of GoT characters who are evil or dangerous, but much more scary are the ones who are complete loose cannons, the ones who seem to have no recognizable moral compass and no real logic to any of their actions or decisions. The Frank Booths, if you will. They're the ones to watch, because they're the show's real wild cards.

Here are the characters responsible for some of the most absolutely insane moments on Game of Thrones!

The aforementioned, murderous, late Ms. Tully poisoned her own husband- and inadvertently started a war- because she was so desperate for the approval of a man who would never love her. Also, we can't help but wonder at her unusually close relationship with her son. There's no way that kid turns out to be totally normal, right?

Known better to fans as "What's Stannis' crazy wife's name, again?", Selyse's thirst for power- and religious fervor- have caused her to turn against her own adorable daughter, convinced that her "deformation" is caused by "heresy" and not, you know, by lack of available pre-natal care in Westeros. Also? Also? Also? SHE KEEPS BABIES IN JARS. BABIES. IN. JARS.

What's the best way for a bastard son to earn approval from his father and prove that he's worthy of the family name after all? Why, kidnap the heir to a rival kingdom and torture him until he forgets who he is, of course! Or at least, that's Ramsey Snow's logic. The scariest part is, it worked, and Ramsey is a credible threat to the north. We can only hope he finds himself head to head with the other bastard Snow- maybe Jon's swordsmanship is the only thing that can stop Ramsey's desperation.

What happened to the Clegane boys in their childhood to turn them so bitter and mean? At least Sandor has a heart somewhere under all of that hulk, Gregor has done nothing but torture, maim, rape, and kill his entire life- and all for no apparent reason. He doesn't seem to have loyalty to anyone but himself, and half the time he seems to just be killing for fun anyway. Now he may be responsible for sending Tyrion to his grave. Real nice guy, huh? Early prediction? He turns out to be the zodiac killer.

Besides looking into fires to see what the Lord of Light has in store for her (usually it's getting naked and seducing Stannis into doing her bidding), Melisandre's other hobbies include casually extracting blood from restrained bastards and sending smoke monsters to kill kings. That's not exactly Facebook-friendly "interests include" stuff.

How totally batshit insane was King Joffrey Baratheon? ...how long do you have?