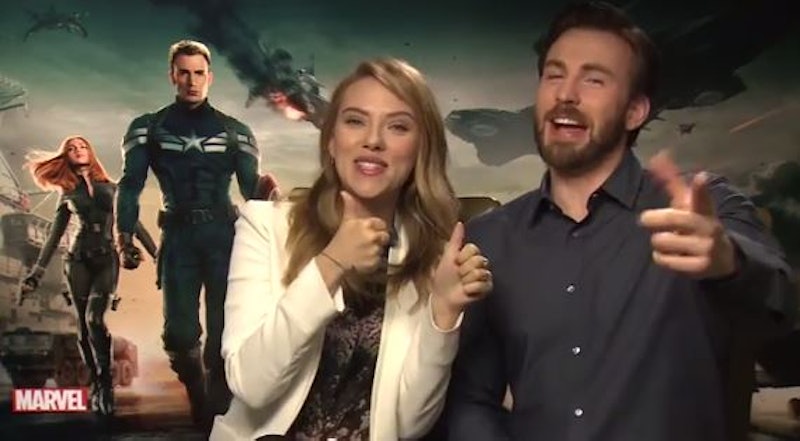 Being a reporter has its advantages, especially if you’re a Joe Michalczuk, an entertainment reporter for Sky News. There are also advantages to being in a relationship with an entertainment reporter, and Michalczuk’s new wife, Jenny, just experienced a whole bunch of those advantages for herself. By name, those advantages are: Zac Efron, Emma Stone, the cast of The Other Woman, Andrew Garfield, Jamie Fox, Kermit the Frog, Miss Piggy, Samuel L. Mothafuckin’ Jackson, Scarlett Johansson, Chris Evans, Ty Burrell, Anne Hathaway, Arnold Schwarzenegger, Kate Winslet, and Hugh Jackman. Talk about the wedding video to end all wedding videos!

Over the course of the past few months, Michalczuk asked each celebrity he interviewed whether they’d also film a short message of congratulations to his bride. As you can see, a whole bunch of them were terrific sports; the intrepid reporter then edited all the clips together into a video he presented at their wedding. In spite of Miss Piggy’s advice, I think it’s safe to say this one’s a keeper — although Samuel L. Jackson (who maintains that he is not Laurence Fishburne) has a point: Don’t forget the prenup. Not to be a total downer, but you never know.

The happy couple are currently off on their honeymoon; before they left, though, Michalczuk tweeted out the video to his 6,000 followers. Is anyone else curious about what he’s going to do for their first wedding anniversary?

More like this
Emily Ratajkowski & Pete Davidson's Astrological Compatibility, Revealed
By Nina Kahn
What Does “The Rizz” Mean On TikTok? The Viral Slang Term, Explained
By Alexis Morillo
The 10 Memes That Defined 2022
By Alexis Morillo
This AI Filter Shows How You’d Look In Different Time Periods
By Alexis Morillo
Get Even More From Bustle — Sign Up For The Newsletter