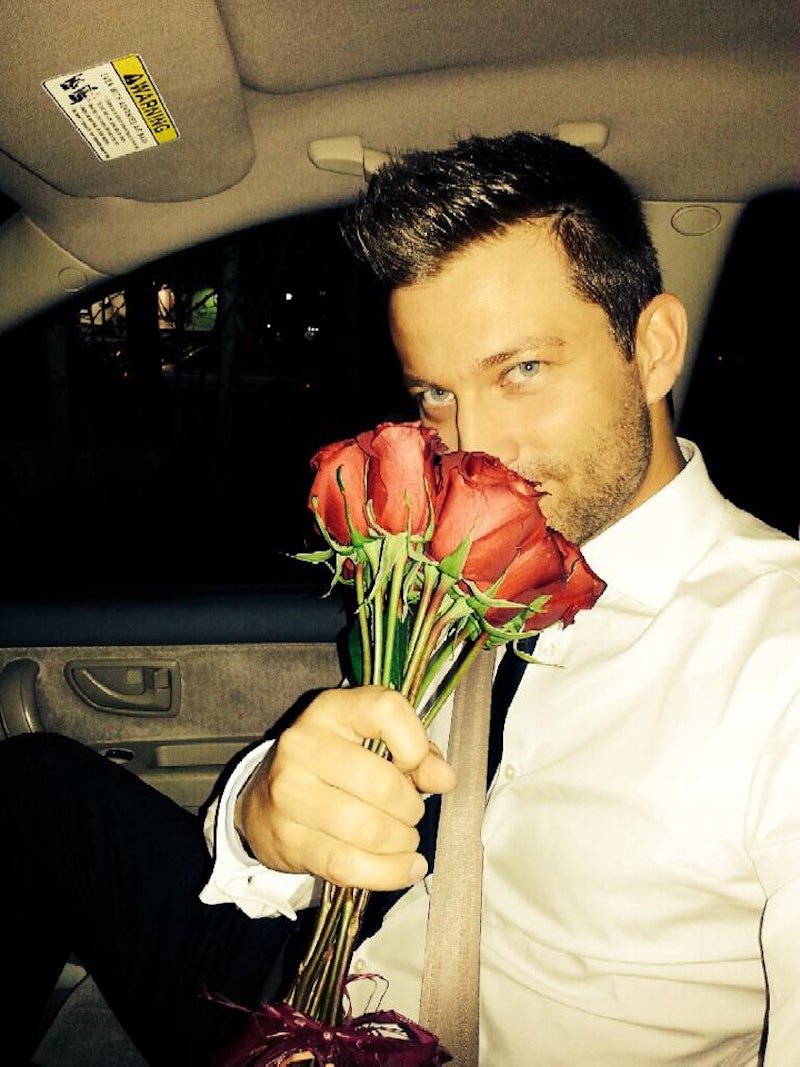 Monday night, when Chris Bukowski showed up to vie for Bachelorette Andi Dorfman's heart, he seemed pretty crazy. He'd declared he'd been waiting outside of the mansion for seven days for a chance to see Andi. “It’s killing me; I have to, Chris [Harrison]. I’m sorry. I have to talk to her. I’m not leaving, just to let you know that.”

In real life, Chris doesn't seem like such a nut, but there's something about the Bachelor/ette brood that brings out the worst in him. Before crashing the party last night, he was on Emily Maynard's season of the Bachelorette and on Bachelor Pad 3. Both those shows gave us a glimpse at reality TV Chris and looking at his past, it's not surprising that he was a little unstable last night. The cameras are just not Chris's friend.

Here are three other examples of how he sort of looses it once the cameras start rolling:

WHEN HE GOT IN A FIGHT WITH DOUG THE DAD

Doug was one of the sweeter contestants on Emily Maynard's season and made a casual remark about a contestant needing to be mature to be with Emily since she had a daughter. Chris, who wasn't even apart of the conversation, immediately took this to mean Doug thought he was too young (Chris was 25) and got in a huge fight over it. He refused to let the point go and rehashed all over again months later at the Men-Tell-All. Not only was he weirdly aggressive about it, but his obsession with the comment, which wasn't even meant for him, was the first crack in his reality TV image.

WHEN HE GOT SENT HOME

Chris made it to the final four during Emily's season but wasn't exactly a good sport when he got sent home. "Do you have an explanation?" he demanded of Emily as she walked him out. She spluttered out the old "I just had to go with my heart" line when Chris shot back in an accusatory tone, "I told you I loved you!"

Emily looked a bit taken aback by his sudden aggression. But his exit (where he claimed he was "10 times the man than all those other f***ing dudes") was great foreshadowing to the total jerk he became on the Bachelor Pad.

EVERYTHING HE DID ON BACHELOR PAD

Chris hurt his chances of ever being seen in a positive light again when his Bachelor Pad personality showcased him as a liar, and worst of all, a jerk. He had flings with three of the girls, Blakeley, Jamie, and Sarah, all while none of them knew about the others. He talked about them like they were just objects, saying at one point "Honestly, the best thing I have done is traded in Blakeley and Jamie for Sarah. It’s like buying a new car. You’ve got the nice new car smell and it’s just so much smoother and nicer and easier for me.”

Other charming points from the season? He said the only way to shut Jamie up is to kiss her and confessed that all he does is look at her boobs.

Chris never apologized for his behavior saying later, "I can't really be sorry. I was playing a game ... In real life, I'm not a mean guy, but I was presented the opportunity to win a lot of money so I'm going to do what it takes to win. You've got to lie and play the game. You can't be nice to everybody."

I don't doubt that in real life Chris is probably much more chill. But he also has some strange behavior exhibited on three different TV shows now, so it might be time for him to take a step back and stop trying to go on the Bachelorette.

Andi dodged a bullet saying no to him this time around.

More like this
Everything To Remember About Lace Morris Before 'Bachelor In Paradise' Season 8
By Grace Wehniainen
Bachelorette Gabby Kissed Her New Fiancé On 'Dancing With The Stars'
By Jake Viswanath
Where Is Former Bachelor Host Chris Harrison Now & What Is His Net Worth?
By Hugh McIntyre
Here's The Full List Of Zach's Confirmed & Potential 'Bachelor' Contestants
By Kadin Burnett and Grace Wehniainen
Get Even More From Bustle — Sign Up For The Newsletter