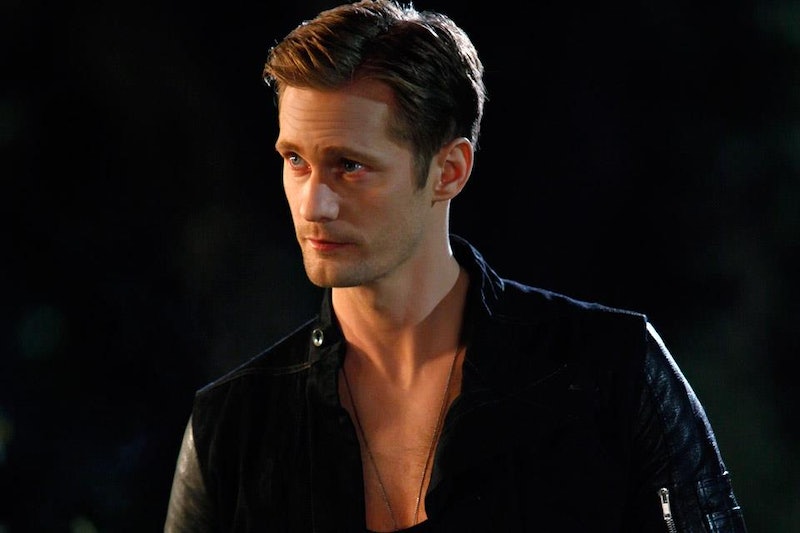 Your favorite vampire may be heading back to Bon Temps sooner then you think. When we last left Eric Northman (played by Alexander Skarsgard) in the Season 6 finale of True Blood , Eric was naked, reading a book, and burning alive on top of a mountain. Eric lost the ability to walk in the sun after Warlow's death rendered the blood he gave Eric useless, which means that Eric could very well meet the fate of his own maker Godric. But according to reports, Eric will be back on True Blood with Skarsgard as a series regular, making his death unlikely. Now new spoilers are saying that Eric might still be alive — and that Eric may reappear in the second episode of the final season.

The synopsis for the first and second episode of Season 7 have leaked online and True Blood fans should be very excited for what's in store. The synopsis for the first two episodes indicate that there are big changes coming to Bon Temps — Bill is a best-selling author, Sookie is with Alcide, and Merlotte's has been renamed Bellefleur, just to name a few. It also indicates that Eric is indeed missing — but perhaps not gone for good. According to the synopsis, Pam will be looking for Eric in the first two episodes... and, if the titles of the episodes are any indication, she may just find them. The first episode is titled "Jesus Gonna Be Here" and the second one is the title that we hope means good news for Eric fans: "I Found You."

It's pure speculation at this point as to how Eric is going to return, but there are a few options that might make sense for the vampire's homecoming. Since there are big clues that indicate Eric didn't die on that mountaintop, perhaps Eric was saved just in time by someone on that mountain. He could have been taken in by people who nursed him back to health, and eventually allowed him to find his way back home. But, uh, who are we kidding? That would never happen on True Blood. It's far more likely that someone kidnapped Eric, and Pam will have to rip some throats out to get back to her maker.

Then there's a more depressing third option. Perhaps Eric has saved himself and chose never to return to Pam and the rest of the people in Bon Temps... even after his brush with the true death. Could Pam go and find Eric only to realize that he didn't exactly want to be found? It would be heartbreaking, sure, but it's not the first time that Eric has gone lone wolf.

Then again, now that we know Eric will be back, it doesn't really matter how he gets here. We're just stoked to hear that the best vampire in all of Louisiana will be around to show off his signature smirk once again.