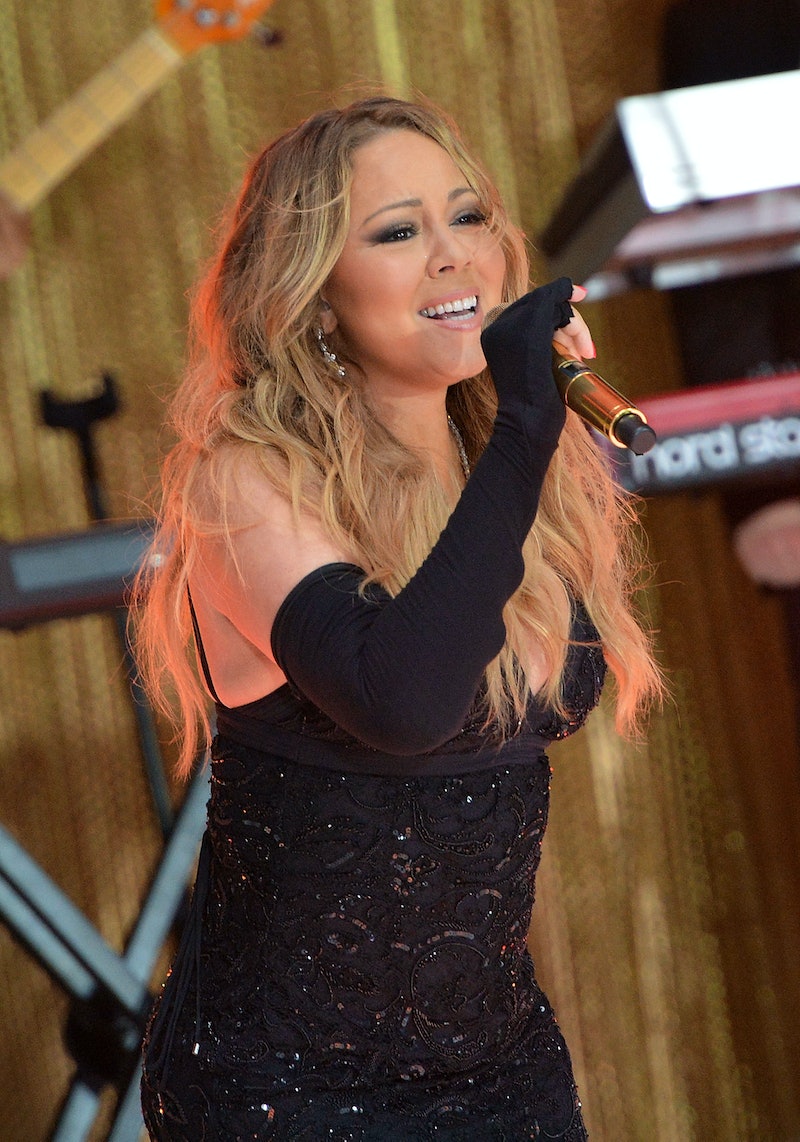 Prior to hearing Mariah Carey's new album, the effort it takes to type out Me. I Am Mariah... The Elusive Chanteuse, annoyed me just as much as her new single "Thirsty," until I discovered the reasoning behind the wordiness. Turns out, that level of self-awareness isn't half bad for a 3-year-old Mimi, who's responsible for the "I Am Mariah" portion of the title. According to Carey, the name of the album doubles as the title of her first and only-self portrait, which to the horror of Bustle writer Alex Kritselis, is featured on the album's back cover. Streaming a week in advance of its May 27 release date, Carey's latest offering subtly shows us why she refers to herself as "elusive," summed up in 14 tracks that run the gamut between sleep-inducing, and making you want to groove or testify in church.

Overall the album's laid-back feel serves as a gift and a curse. On one hand, it's filled with relaxing melodies that put you at ease, like "Faded," a slow jam that finds Carey crooning about a guy who comes and goes like an echo. Unlike "Thirsty," it's not a try-hard track and represents the perfect marriage of her signature vocal style and an R&B beat. Other standout slow grooves include the hip-hop tribute track "Dedicated" featuring Nas, and my personal favorite "Make It Look Good." Carey earns extra cool points for the "playas gon' play" anthem, that includes a Stevie Wonder harmonica solo and the lyrics "lick ya lips, fingertips on my hips as we dip," which sound like a revamped line from Tupac's "I Get Around." That's a win in my book.

However, the latter part of the album morphs into the musical equivalent of an afternoon slump, where you find yourself yawning, and then flat-out struggling to stay awake, let alone pay attention to what Carey's singing about. With that said, I must warn you: DO NOT LISTEN TO THIS ALBUM AFTER YOU'VE EATEN.The songs aren't bad, but they really do take a nosedive in the energy department. Carey tries to recover with a couple of dance-y disco tracks like "You Don't Know What To Do," featuring Wale, or "Meteorite," which are harmless attempts at revving up the tempo, even if they are a little on the unmemorable side. She also tries her hand at another soul-rousing gospel song (and another long ass song title) on "Heavenly (No Ways Tired/Can't Give Up Now)," which features a gospel choir. And "Supernatural" confirms that at least one of dem babies has most certainly inherited their mother's singing abilities and they already know it. Monroe boldly declares, "I'm a chanteuse."For the most part, I Am Mariah...is a pretty solid answer to anyone who called Carey's comeback into question. Even though you'll be tempted to rest your head upon a pillow while listening, take comfort in knowing that the album's definitely not all fluff.