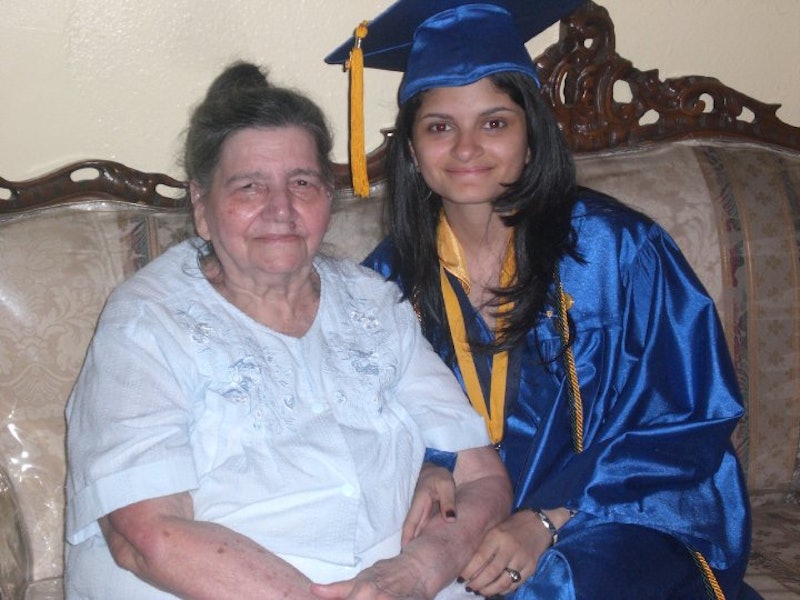 At the end of four hard years, when I turn the tassel from the right to the left, I’ll probably have tears in my eyes. But when they fall, it won’t be because college is over. It’ll be because my mom and grandma aren’t watching me graduate.

I lost my mom when I was 10 years old, so I don't have many memories of her to hold on to. She saw me graduate once, when I was in kindergarten. At that time, my cap and gown were white, and post-graduation pictures were taken in an elementary school gym. In her eyes, the print diploma was a source of pride, even if it doesn't show on her face in our one picture taken that day.

The blessing and the curse of losing her when I was so young is that remembering her vividly is difficult. Our trip when I was seven to Disney World comes back to me in bits and pieces, like an old movie you only sort of remember. We went on the It's a Small World ride. The boat drifted too slowly. The Small World song was incessant. My mom's shoulders next to mine felt normal.

After I turned 10, I would never know that same normal again. I had to find a new normal. My grandmother would now be my legal guardian and my parent. My uncle would be even more involved in my school activities. My brother would pick up my report cards at school.

The reality I had to live with forced me to accept that losing someone doesn't come with the option of finding them again.

By the time I got to high school, I worked tirelessly so that my mom's six day work weeks and single motherhood would be justified. But it was my grandmother who now became my guiding light. By taking care of our big family, she showed me how to be a leader.

A woman who prided herself on having barely-noticeable gray hairs and a sharp tongue, my grandmother taught me what it meant to live each day at face value.

When my grandmother got sick in November 2013, I saw the strongest woman I knew graduate to a new chapter in her life. In the last few months before her death, she never wanted to be alone. I would sit by her bed and talk to her. She would list off dichos — Spanish sayings — that her memory loss never stole from her. We would flip through magazines and she would stop me midway, pause, think for a second, and then say in Spanish, "No, but we have to go back to the front of the magazine because you forgot to show me your name."

My grandmother forgot a lot of things, or drifted back to a time when she was much younger, but in any given moment, if you asked her what Vivian wanted to be after graduation, she would say, "A journalist, like Jorge Ramos." I'm lucky that she was around long enough to see my byline in print and my name on a masthead.

My grandmother is the reason I already have plans set for the day after my graduation. I'll be meeting with a blogger to discuss plans for a website I'm working on. The site will be called "Too Damn Young," and its mission is to be a resource and offer a community to any teenager who has lost a loved one.

When I walk across that stage at graduation and am handed a piece of paper I worked all my life for, I’ll go back to my seat knowing that I have so much more to be thankful for. I have memories that I can hold on to, especially with my grandmother. I'm one of the few people who knew how much my grandmother liked to hear her horoscopes; one of the lucky few to know that coffee was her kryptonite.

As I graduate, I’ll be fully aware that I’m standing on the shoulders of two exceptional women. From the stands, my brother, uncle, and cousin will be watching me finish one chapter of my life, and start another.

My mother and grandmother's initials — ML and MB — will be book ends to the words "Here's To Us" on my graduation cap. I graduate for all of us.