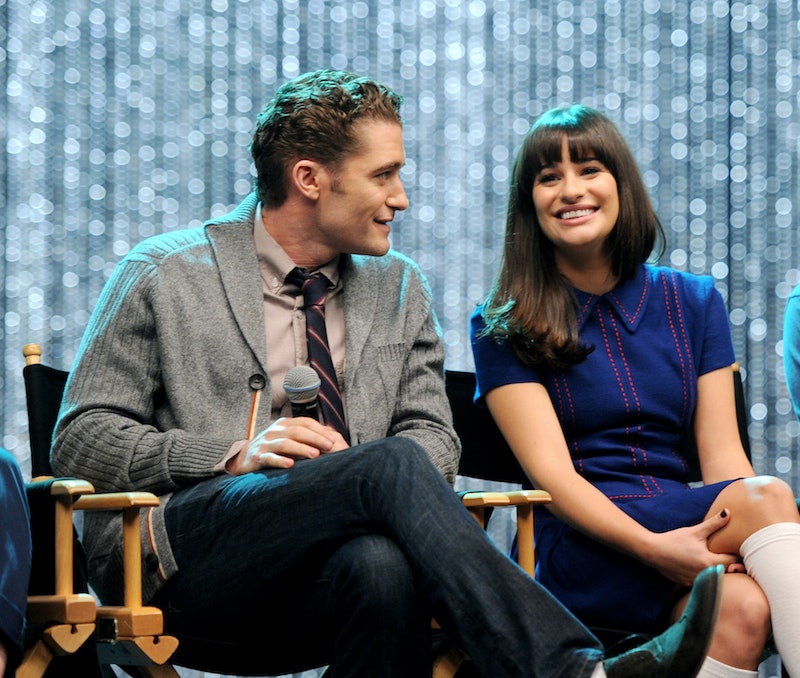 Am I the only person who can't get "Hot For Teacher" out of their head now? Lea Michele released a book called Brunette Ambition on Tuesday, May 20, and it was essentially part-autobiography, part-insider tips on beauty, inner strength, and more. Among the revelations in the autobiography portion of the book was the admission that Lea Michele and Matthew Morrison dated briefly back in the day, which was one of the many rumors that circulated around Michele and Morrison back when Glee was still in its first season. They both denied it, which is fair enough since they weren't romantically involved at the time, but there's a part of me that wishes Michele had owned up to this before I developed such strong character-actor association.

"When we shot the pilot, I met Cory Monteith, Kevin McHale, Amber Riley, and Chris Colfer for the first time," said Michele in Brunette Ambition. "I had worked on Broadway with Jenna Ushkowitz and Matthew Morrison before. Matt had been a friend of mine for years, and in fact we'd actually dated back in the day for a Broadway beat."

This goes a long way to explain the creepy chemistry that existed between Michele's Rachel Berry and Morrison's Mr. Shuester on Glee, even if it was played for all its hilarious, over-the-top, no-just-no glory in "Ballad", the season one episode of Glee in which Rachel develops an obsessive crush on Mr. Shue. However, one of the few things that we know about Glee's sixth and final season is that it's going to end with a scene between Rachel and Mr. Shue. Hopefully, the impact of the revelation about Michele and Morrison will have long faded by then or the scene might be less touching and more like a repeat of "Don't Stand So Close to Me/Young Girl".

On the other hand, Michele is 27 years old and Morrison is 35 years old — not to mention the two have known each other since their Broadway days — so their former relationship is more cute in reality than it is creepy. It may have only lasted for a Broadway beat (whatever that means), but it's nice to have confirmation of a relationship we suspected as far back as 2010 even if it took four years and a book for the truth to be revealed.

If you can shake Rachel Berry and Mr. Shue from your mind when you look at them — something that will become easier and easier as time and other acting and musical prospects emerge — then this bombshell will be less of shocker than it might be otherwise. If the character association is too strong for you to bear, then at least Glee is on break until 2015, so you have plenty of time to get over it.