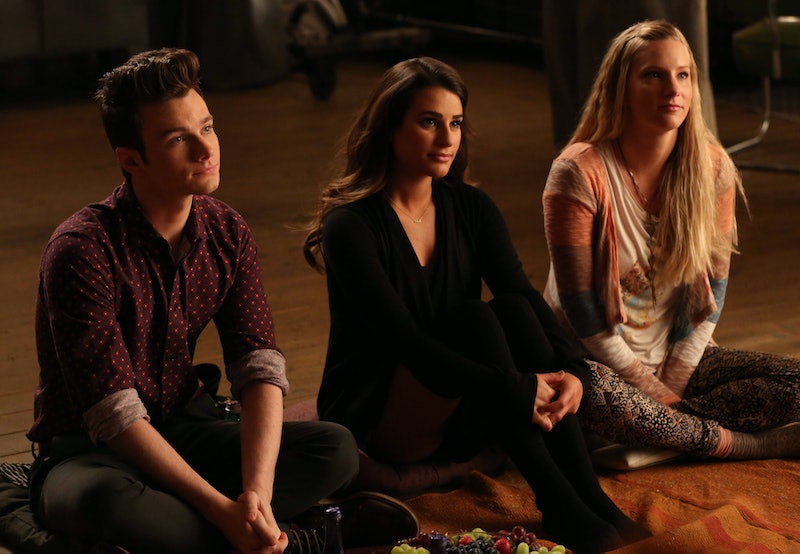 With the recent news that FOX has decided to hold Glee Season 6 until midseason 2015, Gleeks suddenly have a looong wait ahead of them. After tonight's finale, we'll have eight full months to speculate, theorize, and get pumped up for what's sure to be a roller coaster ride of a final season. While certain things remain up in the air (Will Mercedes or Brittany return as regulars? Will Naya Rivera be back at all?), there are some things we do know for sure about Season 6. So to tide you over, here's a list of everything you can expect from Glee next year:

One of the biggest question marks surrounding the final season is how many episodes it will contain. Some theorized that the network would take the two episodes cut from Season 5 due to scheduling issues and add them to Season 6, making for a super-sized final season of 24 episodes, though some insisted it will have the regular amount of 22 episodes. And some speculated that, due to declining ratings, Season 6 would see a shortened order of 13 episodes. So which is it? Small, medium, or large?

FOX just confirmed that Glee does have a full — if not super-sized — order of 22 episodes for its final season. However, that info comes with a caveat: network president Kevin Reilly also stated, "We’re going to sit down and talk [to exec producer Ryan Murphy] about how to end the show and how many that is." So if showrunner Murphy decides he needs fewer than 22 episodes to tell the story he wants to tell, then we could still be looking at a shortened final season. At least it will be a creative decision rather than a monetary one.

It will not be NYC-centric.

Although the show and FOX's advertising campaign both made a big deal out of moving Glee to NYC full-time for the latter half of Season 5, the final season will surprisingly not follow through on that Big Apple focus. When asked if this string of New York-set episodes were a preview for the format of Season 6, Murphy responded emphatically:

So where will Glee head next?

We'll see the return of a familiar location.

After all the hullaballoo surrounding Glee's decision to say goodbye to the New Directions and McKinley High for good in the show's 100th episode celebration, would the writers dare return us there for the final season? It seems likely. While Murphy has declined to comment on the official setting of Season 6, there have been numerous hints that we haven't seen the hallowed halls of McKinley for the last time. Murphy himself acknowledged that, "You might see it again in some very nostalgic way, yes." And star Lea Michele hinted that "[Rachel Berry’s] going to be in a location we’ve seen her in before, but in a very important role."

A very important role for Rachel in a familiar location? Could Glee's final season be setting up Rachel's return to McKinley to become the new coach of the glee club?

There will be a significant time jump.

It's already common knowledge that there will be a time jump of unspecified length between Seasons 5 and 6. And while there are plenty of reasons to be worried about what this means for the show, there is one good thing that could come out of it: it would be a great way to get Chris Colfer's Kurt and Darren Criss' Blaine out of school without them following in Rachel's irresponsible footsteps and dropping out. Given that Glee has had various characters enrolled in NYADA for two whole seasons now and we've only ever seen one classroom and met one teacher, the writers don't seem all that invested in telling a college story. The time jump could allow them to move on and explore the characters' lives as real adults in the real world, and all the drama that entails.

As is fitting of a show's final season, you can expect to see many familiar faces return before Glee closes its doors for good. Murphy has said he's reached out to everyone who's ever been a regular on the show and invited them to return in whatever facet they're interested in or available for. This includes both students and teachers, so don't be shocked if you haven't seen the last of Tina or Coach Beiste just yet. And Murphy has specifically confirmed that we will check in with the newest glee clubbers (Marley, Jake, Kitty, etc.) before the end of the series. Our one request? A surprise resurfacing of the mysteriously vanished Matt Rutherford. Remember him?

Prepare for the year of Blamchel.

With so many characters potentially floating in and out of the final season, which ones can we expect to receive the largest focus? All the signs currently point to Season 6 centering around a core trio: Rachel, Blaine, and Sam. The Season 5 final sets each of these characters up for major potential plots next year: Rachel is working with guest star Kristen Schaal on a development deal for a television show on FOX; Blaine is being groomed for stardom by June Dolloway (Shirley MacLaine); and Sam's modeling career is about to take off. Here's what Lea Michele had to say about the central trio:

I know as of now what myself and Chord Overstreet and Darren [Criss] will be doing next year. We can't say -- Ryan has made us keep everything completely under wraps -- but we're all very excited about where our characters will be going next year. It's a good surprise.

She certainly makes it sound like all three of these characters are heading to the same place... And there's only one location we can think of that would suit all three of their storylines that isn't New York: Los Angeles! Could Glee be preparing to move to the City of Angels for a stint before finally settling down in Lima, Ohio? Setting the show in L.A. would certainly save money for the ratings-challenged show — they wouldn't have to build elaborate NYC sets or pay to fly the entire cast and crew to New York for location shoots anymore. Everything they would need for an LA-set season would be right outside their own backdoor.

A romance for Rachel is not out of the question.

Though the Glee writers wisely steered clear of any romance for Rachel this season following the tragic death of Cory Monteith/Finn Hudson (other than a misguided detour into a one-episode flirtation with Sam, that is), a final love story might be in the cards for Ms. Berry. It's certainly the topic of much debate in the writers' room, according to Murphy:

To be quite honest, we just haven’t been able to crack it, because I feel like it’s such a sensitive topic and the fans have such an idea about it. I think half of them feel like, yes, Rachel should go on, and I think half of them probably feel like no, she shouldn’t. We’ll follow Lea’s lead, as we have so many times this year. She’s always been so great and so sensitive and been so wise about how to handle that stuff. So we have to make that decision in the next couple of weeks or months: Is Rachel going to have another romance or does the second half [of Rachel's life], romantically, happen when Glee is over? That’s something we’re debating. It’s hard.

One popular idea floating around the Glee fan base is, if Rachel does end up with somebody, it should be former lover/rival Jesse St. James. The lead singer of Vocal Adrenaline played by Jonathan Groff is a fan favorite character who hasn't been seen since Season 2. While he ended up betraying the New Directions by defecting back to VA, he's still considered by many to be a perfect match for Rachel: They're both super talented, super competitive, and super driven. And it doesn't hurt that Groff is Michele's best friend in real life — she would probably feel more comfortable acting out a romance with her BFF than a stranger. Of course, Groff is currently committed to his HBO show Looking, but surely he can get away to film a few eps for Glee?

The series will end with a Rachel & Will scene.

In the wake of Monteith's passing, Murphy revealed his original ending for Glee, which involved Rachel returning to McKinley, where Finn was the new glee club coach, after making it big on Broadway, and telling him she was "home." Sadly, that ending is now impossible, but Murphy has teased that the new ending will remain faithful to the spirit of the original:

It’s about Rachel and Mr. Schue, and it returns them to their origins, their roots, how they felt about each other when they were much younger and everything was idyllic. I think the ending has to be a reflection and a celebration of how far all those characters have come.

Seeing Will and Rachel, who started the show as a naively hopeful teacher and his unapologetically ambitious student, together again will bring the series full circle in what should be a very satisfying — if bittersweet — conclusion.