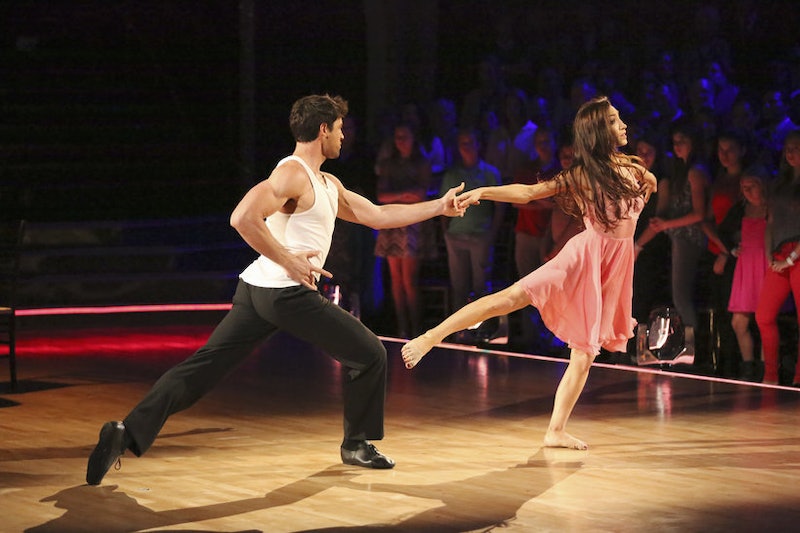 As you know if you watched last night's finale, Meryl Davis and Maksim Chmerkovskiy won Dancing with the Stars and walked away with the mirror ball trophy. Now it's time to move on to other things. Not to other things altogether, we're still focusing on Meryl and Maks, but we're moving on from dancing to a possible wedding and big Russian babies, to use Maks' words. Everyone who watched DWTS experienced Maks and Meryl's palpable chemistry and made the jump from, "Aw, they make good dance partners" to "THEY NEED TO GET MARRIED RIGHT NOW" in a matter of weeks. So will Maks and Meryl really end up married? If their jokes about it say anything, the answer is.... maybe? But probably not? Actually, yes? Ugh, why are they joking about it! Ease the worries of your fans, M&M!

On DWTS last night, Maks said in an interview segment filmed before the show, "I want to ravage her and have ice-skating, big, Russian, mean babies. We’re going to call them Boris and Oleg. Their nicknames are going to be Bear. Both. One nickname for both." Then he was asked when he was going to propose to Meryl and he said, "Probably tomorrow." Obviously he is joking, but it seems Maks didn't know those comments were going to be aired. When the video was shown before Maks and Meryl's dance, Maks ended up blushing and said, "I want to go on the record I have no desire to name my kids Boris and Oleg. No disrespect to Borises and Olegs."

Asked about Maks, Meryl said, "I can’t talk about that. Our relationship is very unique because he incorporates so much passion in what he does."

It sounds like Maks might be covering up a crush with ridiculous baby jokes. Maks and Meryl haven't confirmed they're dating, so all of the "Will they get married?" talk is really "Will they start dating and reveal it publicly and fall in love and eventually get married?" talk. As for the possibility of the dating happening, it seems likely based on how they speak about each other. Maks said after winning (this was his first win after 18 seasons!), "It means so much. To do it with Meryl is a dream come true. There’s a reason it didn’t happen before — because it was meant to happen with this one." How cute!

Meryl is more tight-lipped on the topic, but she did say in an interview with Glamour, "I definitely think that we’ve developed a friendship. I don’t have this going with everybody. We’re comfortable with each other and have developed a relationship that has allowed this to happen." Maks, on the other hand has made it clear he wants their "friendship" or "whatever it is," to continue post-show. "I’m not gonna impose my friendship on anyone, but with Meryl, I think it’s pretty clear that we’re going to try to maintain whatever it is we have going on way past the show."

And don't forget, technically he proposed the first time they met:

The evidence speaks for itself.

More like this
Teresa Giudice Flipped A Table — Again —  On The 'DWTS' Season 31 Premiere
By Jake Viswanath
The Ultimate Guide To 'DWTS' Season 31’s Move To Streaming On Disney+
By Brad Witter
Clayton & Susie Broke Up, Citing "A Significant Amount Of Pain" After 'The Bachelor'
By Jordyn Tilchen
‘The Ultimatum: Queer Love’ Is Officially On The Way
By Radhika Menon and Kadin Burnett
Get Even More From Bustle — Sign Up For The Newsletter